Last month I did a round up of the first month plus of our existence as a wargaming brand.  The posting was well received and I got several emails asking me to do it again and indeed provide a round up every time the month and the current free miniature period was about to end.  Why?  Well we make a release or releases every week and a good number of people liked the idea of a snapshot of the month to take it all in.

So picking up where I left off in September 2013 we announced a new free miniature and then went on to make the following releases:

Releases that expanded both the Prydian Army and Shia Khan Army in 15mm scale and brought us into the resin terrain business too.  On top of that we struck a welcome blow for women's promotion with female miniatures and kicked off our artwork range too with Ylona.  Have a look to read and see a lot more on all of the above. 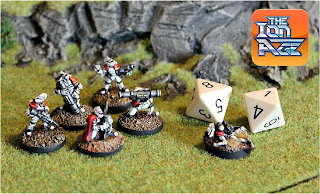 During the month we had other things going on alongside our weekly releases which we detailed on the blog.  The most salient points in the month were as follows:

Patrol Angis Playtesting.  We assembled a talented group of just over twenty playtesters for our 2014 planned 15mm skirmish title (first in a series) set in The Ion Age.  Each week playtesters sent in reports and pictures.  You can see these on Week One, Week Two, Week Three, Week Four and lastly Week Five.  Lots of interesting material to read and great pictures to look at.  Testing ends in November.

Hab Dome Early Supporter Offer.  We had our first early supporter offer (eso) lasting two weeks in October offering two bundles.  a 15% discount and a 25% discount on one or three domes with an unreleased 15mm Noblesse miniature thrown in.  The response to this was frankly huge, thank you all, and we blogged about it as well.  The Noblesse, well she will appear in 2014 as part of a noble code.  We are doing another ESO in November.

Female Retained Concepting.  In response to wargamers pleas we moved our first release of female miniatures in 15mm right forward.  Sam Croes produced a green sculpt and concept art for a blog post in late September and the response to it was good so he went ahead on another nine and working fast got them ready in time for release as IAF016 in October.  Really good going for a few weeks work.  It makes for excellent reading so have a look.

1000 Views on a Blog Post.  Quite simple this one.  I was really proud of the fact that the release of IAF016 got more visits more quickly than any other post in the month.  We did a wee bit of art to celebrate the 1000.  Its now well past 1500.

Poster Prints and Sci-Fi Art.  I really love science fiction art and a lot of our customers do too so The Ion Age decided to get into the grand old poster print game.  High quality and great art.  A blog post showing the first print as an image and a physical product was done.  We will be doing more!

You would think we never slept...well we do a bit.  Even though we run 15mm.co.uk and Alternative Armies as well.  See you about on the blog during November...its gonna be a spooky awesome month!

PLEASE READ THIS
May 2019 and The Ion Age has been taken back into Alternative Armies.  It continues with new releases into the future!  Go to Alternative Armies for Ion Age pages of the 15mm Range the 15mm Terrain Range the 28mm Range the Publications range and the Free Downloads collection too for the latest.  All links to the ion age site are now defunct sorry!  If you wish to see something or ask a question email me on sales@alternative-armies.com.  GBS
Posted by Gavin Syme (GBS) at 20:21