'Humans your time is at an end.  Your planets, your cities, your homes and your children are now the dominion of the Shia Khan Empire.  Resist if you must, you may even slow us but you cannot ever prevail.  We are eternal and we are always triumphant.  Our stars immeasurable, our victories countless and our will pure permanence.  There is and there always has been the Shia Khan.  You belong to us.  You are the slave of the Great Khan.'

Translated from a continual loop being broadcast on all channels from the Belkus crater.  Fleet Command 4329IC

The Shia Khan Empire in The Ion Age

The name Hugo Sevaris will forever be cursed by all free born Humans in the Prydian Precinct for it was he, as a member of an exploration team, in the Camarthen system who activated a Matter Gateway and brought the Shia Khan back from a legend to a murderous reality.   No one knows what Sevaris wanted or why he used arcane knowledge from the time of the Ban of Prejudice to open the massive sealed chamber in the middle of the Belkus Labyrinth and then activate the Matter Gateway.  He died that day after becoming the only Human to ever see a Khanate world by stepping though the Gateway.  Only his head came back followed by a dozen Shia Khan Legionaries and then a dozen more and then a hundred.  Within an hour the chamber was a battlefield as the Camarthen Planetary Militia and several hundred Retained Knights, all the Prydian forces on the planet, tried to stem the flow and shut down the shimmering Gateway.  This valiant attempt failed and in the end a civilian fusion reactor was brought from a nearby city and detonated turning the Labyrinth into a crater burying the Matter Gateway.

No one really knows how the Shia Khan not only managed to survive the blast and being buried but they did and it took only a few weeks for them to dig their way out of the mile deep rubble.  News of the return of the Khanate reached the Aeddan Council who reacted with nothing short of panic.  The Prydian civil war was ongoing and the Prydian Army stretched as it was.  It would take months to organise a fleet with enough new troops to cover the great distance to the Camarthen system and halt the aliens.  Perhaps had it not been for Princess Daphne Cyon taking effective control of Council debates on a course of action nothing would have been done.  As it was she convinced the Council to agree to sending a task force ahead of the massive military build up that would take months to draw together.  The task force would be a single Avalon class starship carrying forty Casillis class portable castles.  Fifty thousand troops led by the infamous Lectus Bower.

Leaving the core systems the task force led by Starvaulter prime Lectus Bower made it way to the Camarthen system really with no idea what they would find.  Leaving their starship behind the flotilla of Casillis portable castles made an unopposed landing and began their deployment.  It did not take long for the Shia Khan to make their presence known.  Across a few short days the task force was essentially over run by waves of Khanate attacks.  Lectus Bower's flag ship was destroyed and he vanished into thin air.  The numbers of alien soldiers make it clear that the Matter Gateway was being used constantly to bring troops into the Prydian Precinct.  Isolated Starvaulter and Retained lances made daring raids destroying what were evidently automated factory pods which were being brought part by part out of the now fortified Belkus crater.  These pods were building armoured vehicles and robotic terror sentinels too large to bring though to Camarthen directly.  Few Human soldiers and even fewer civilians were now alive on the rapidly changing planet.

Months passed and a huge fleet was assembled in the New Glastonbury system in near total secrecy.  Command was given to the victor of the battle of Fenway Prime the now great aged Knight General Obermann.  Obermann made it his life to read and absorb every single piece of information and gossip he could about the Shia Khan and also the reports that filtered back from the task force before they petered out completely.  This was compiled into a dataspread known as 'The Khanate Return' and the sacrifices of the task force were not wasted.  Now the Styx, Venom and Priam Legions were expected, the horror of the Psychoborgs, the lightening fast Canthus and the hulking Warlords too.

Arriving in the Camarthen system the fleet found it a greatly changed place to that the task force had entered.  The Khanate had evidently built crude interplanetary vessels and launched them at all the worlds in the system the massive levels of hard radiation were evidence of this.  A lone Dragonship was destroyed by one of the fleet's warships and then the landings began.  Under fire wave after wave of Casillis, Keep and Moat class portable castles drove through the smoky atmosphere and fought a clear perimeter for the largest of them to erect a powerful Hurwent shield.  It would be a truly epic effort to clear the system but for the sake of all of the Prydian Precinct it had to be undertaken.  The campaign proper was begun!

Khanate troops in battle come in many forms and not all of them have yet been seen or understood.  It is next to impossible to take a live prisoner and the language used by the Shia Khan cannot be lexicon carved into Human speech.  Here is what we know:

Shia Khan Legionaries
The main fighting formation used by the Khanate Empire is the Legion.  Its exact structure is a mystery but what is known is that the majority of the troops in a Legion are Legionaries dressed in reactive glimmer suits with auto aid and breather systems in their helms.  Legionaries operate in Tesserans typically with mixed or similar weapons.  There are also Monocycle and Deathwheel motorised sections along with portable weapons in a typical Legion.  They are stubborn foes not given to easy retreat.

Shia Khan Legion Pioneers
First into the breach seems to be the motto of the Legion Pioneers who are distinguished by their donning of un-powered upper body armour.  Legion Pioneers are more experienced than typical Legionaries and as a result they are given priority missions with greater danger.  Their Tesseran and other formations are the same as Legionaries.  Pioneers can be tough to sweep away even with Retained Knights!

The Nox
Part of a Khanate Legion but also seemingly above and beyond it the Nox are a law unto themselves.  Their powered armour is superior to Alwite and their reputation for brutality and evil well deserved.  Whenever the Nox are encountered it means the Shia Khan are intent on winning.  Best to call upon the Desteria! 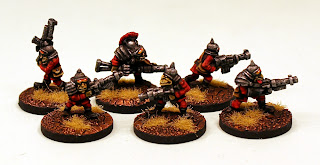 The Maligs
Consisting more of a horde than a defined military formation the Maligs are Goblinoids from elsewhere in the galaxy.  Cunning, cowardly but rather effective at killing given superiority in numbers and opportunity the Maligs should not be underestimated.  While they work with the Legions they seem to be centrally assigned and pooled.  Given second rate armour and weapons and some rather odd contraptions too the Maligs are often the bane of Planetary Militia or unfortunate Muster patrols.