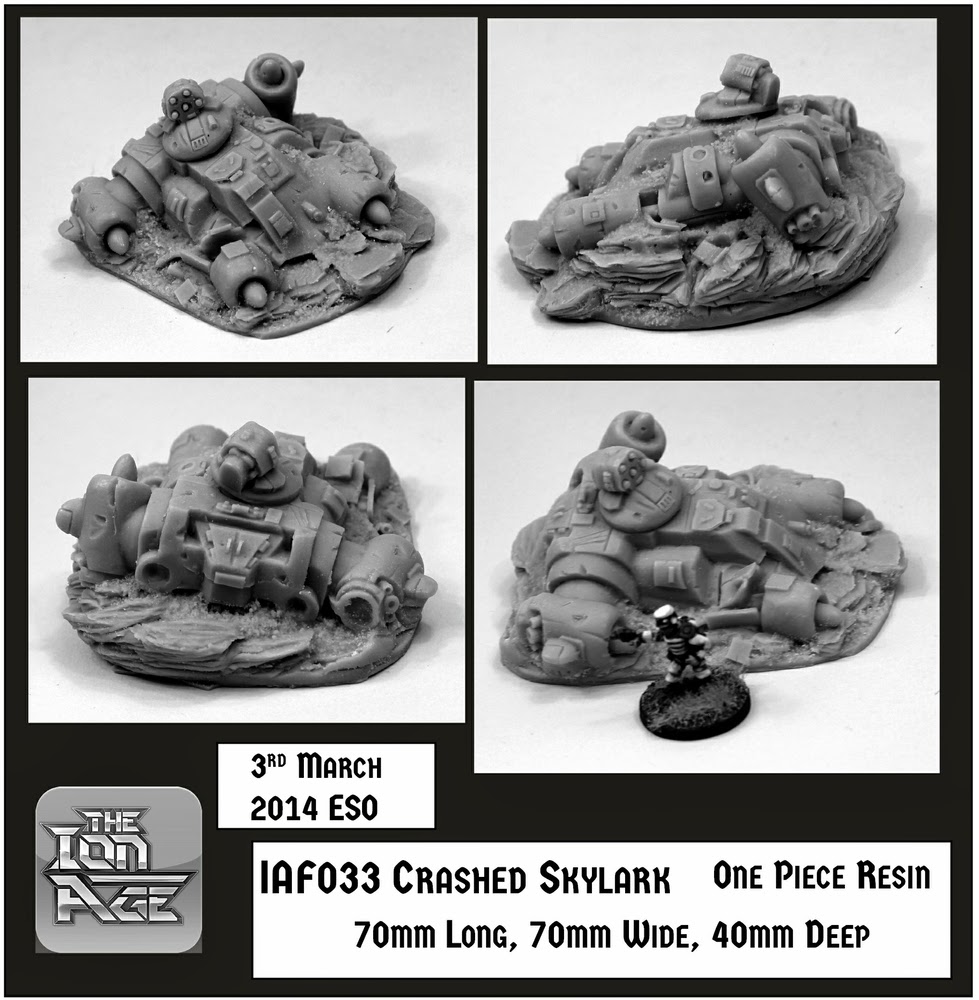 Welcome to part two of the Skylark preview posts.  If you missed the first part, well it showed you the Skylark Patrol Flyer itself and you can read it here on the blog.  But now we are moving on to the next item that will be a part of the next Early Support Offer bundles on 3rd March 2014...a Skylark that can no longer fly.  IAF033 Crashed Skylark!

The Crashed Skylark is a sad reminder that even the mighty can be laid low by well some well aimed shots or a bit of luck.  Embedded in the rocky terrain of Camarthen Prime or any other world of the Prydian Precinct the broken hull of the 'lark is now nothing more than well machined scrap.  Or is it?  Its a large one piece casting some seven centimetres long and the same across with a lot of fine detail from the rocks and ground to the shattered engine mounts and exposed cables along with peppered impacts from low calibre rounds.  Its a great piece of battlefield terrain to add character or as a mission objective.  It adds to the strength of the Skylark as a vehicle by presenting it downed for use in your wargames if your flying one is destroyed in play.

Quite often wargame companies will overlook the depth of their settings but that is not the way that The Ion Age intends to operate.  You might have seen that our Havelock Battlesuit and our Duxis Battlesuit both have 'fallen' versions which can be used as mission objectives or battlefield terrain.  These add to the depth of the battlesuits for players and this crashed skylark does the same.   As well as this the Crashed Skylark fills the void often left by games that are purely points driven.  Narrative matters.  Tense scenarios can be had with terrain that can be made interactive.  Battlefield terrain can make your gaming table look even better than it otherwise ever would.

But where did the Skylark come from as an idea and as a model?  Well it has great space opera pedigree behind it.  Back at the start of this year when the design stage of the Skylark was underway everyone involved named one item of classic wargaming from our own lines that would be an influence on the design. The original 15mm scale Ion Age white metal vehicles like HOF18 (now retired and to be re-introduced upgraded in resin as the Adder Combat Car later this year) gave shape to the core hull of the Skylark.  It would match up with those models on the table as part of the Muster.  But it was to be a flying vehicle and there was nothing like that in the existing Ion Age, but Laserburn provided inspiration there.  The jet engine mount on the V106 Law Officer Air Raft (see image below) is 80's perfection so we multiplied it by four and added its influence to the Skylark for motive power.  Lastly the reaction to the Hab Dome and its top mounts including the IAF015A Sentry Gun gave the 'lark its belly gun and the missile pod from the Havelock went on the turret ring. So from the classic and old school ideas came a combined design that took them all in and came up with something new and retro at the same time.  The Skylark is a unique flyer; just look at it.

So that's it for part two of the preview and that means one part left.  In the third part I will show you the last part of the Skylark ESO's and outline the bundles for March 3rd.  I hope you are enjoying these short articles about our process and ideas.  Feedback is most welcome.