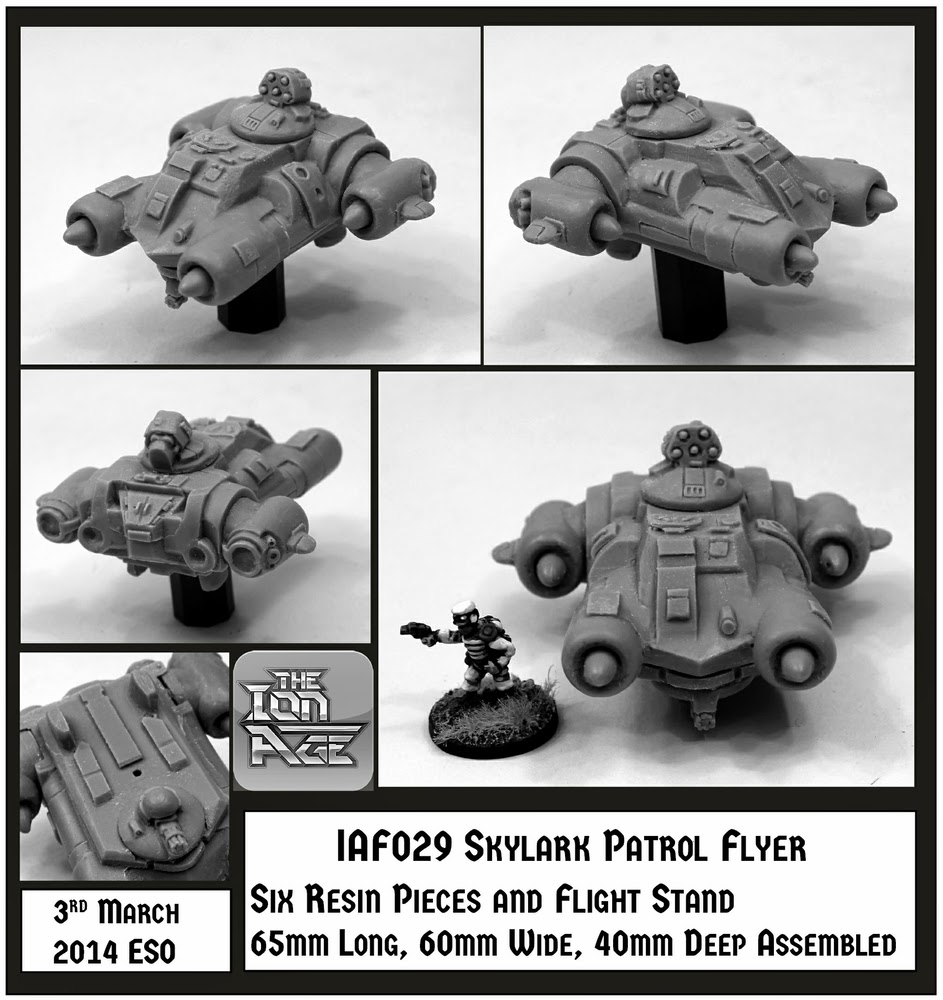 Those who follow this blog will have noted back a couple of weeks ago in the Landing Pad concept post that the fiction intro spoke of a flying vehicle for the Muster called the 'Skylark'...well it's more than fiction it now exists!

Back in February this year when we were designing this 15mm resin vehicle kit we wanted to come up with something modern but also totally space opera and pretty unique too.  I think we have.  Its a mantra of mine that what makes sci-fi wargaming, especially in 15mm scale, one of the most fun places to be as a wargamer is its originality.  The Ion Age is doing and will continue to do things to make the scale more diverse.  Its the core of our March releases and its a four engined wonder.  The Skylark is brand new and its old school too; best of both.

Above you can see a picture of the super new (this is the first one!) IAF029 Skylark which will be one third of the March 2014 Early Support Offer (ESO) bundles which will begin on the 3rd of March 2014.  But what is the Skylark?

The Skylark is a flying patrol vehicle used by the Muster and its our first full vehicle release in the 15mm range.  While all Muster make use of the Skylark it is the Patrol that are famous for using it.  Most Muster use the ground travelling variants of the Adder vehicle.  Carrying a pilot and gunner along with a four man fire-team which can deploy from hatches in its armoured hull.  It carries an underslung mounted rotary cannon and can have an optional centre hatch or missile pod on a top mount. Propelled by four jet engines it is very speedy and excellent for recon and getting in and out fast.  The rear engine pods can be rotated for landing and take off.  Deployed all across the Prydian Precinct its a child of the civil war and is now being put into use against the Shia Khan too.  It can sit on its own props or be mounted on a white metal flight stand that will come out later as a release (not pictured).

There are two more posts coming about the Skylark which will show the other items which go with this vehicle and will be parts of the ESO's as well.  Stay tuned!