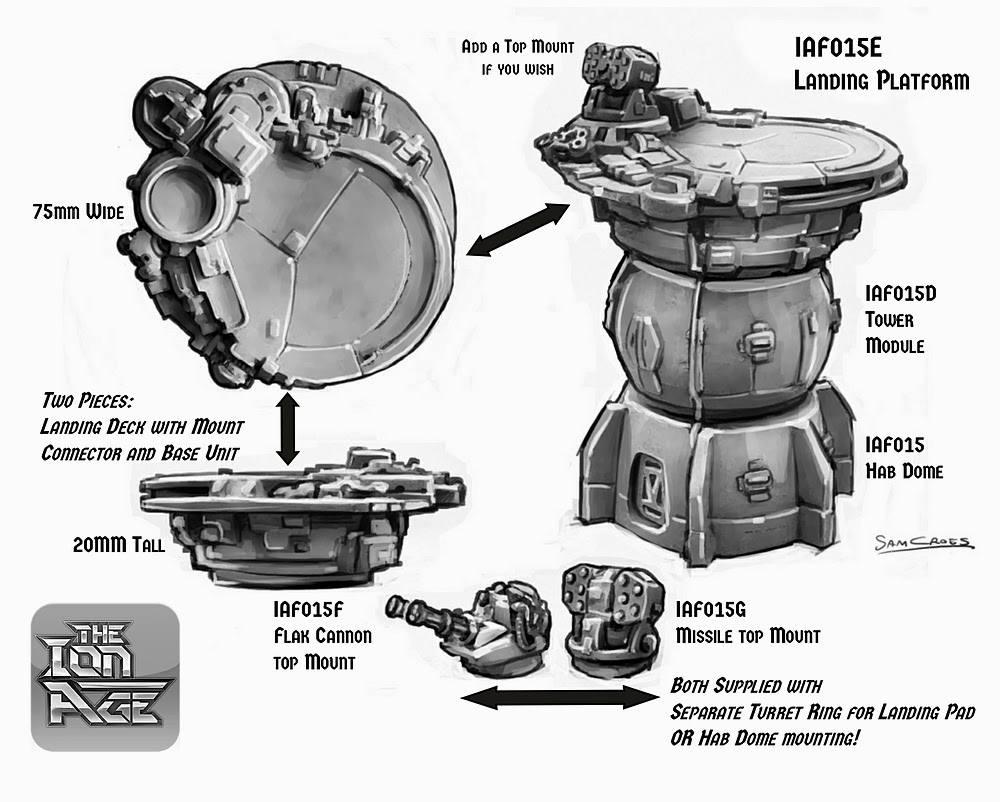 With a gentle thrum the repulsar plating of the Skylark Patrol Flyer lessened the forces of gravity as the vehicle cut its jets and settled gently onto the landing platform atop Tower 7 of the Mandalay Complex.  The Prydian Army was trying to pry the League of Canlaster from Umbar IV, this outpost planet of use to no one but those after fresh water.  It never stopped raining, never.

Severing data links and flicking off activation switches the Muster pilot of the Skylark released his harness and opened the hatches.  He felt the eternal cold drizzle on his face as the fire-team he had aboard disembarked out onto the rubbacrete platform.  They were a hundred feet up in the air and that suited the pilot fine.  This world was no picture and the sooner his regiment left the better.

A small door opened on the surface of the landing platform next to the inactive rotary barrels of the flak cannon that protected the tower. Spilling yellow light into the grey sky a head appeared from the opening and then an arm which beckoned the tired Muster Patrol troopers inside.  Inside where it was dry, warm and there was food.  Hopefully they would get to eat before those Cannie's tried another stroke.

With the Duxis Battlesuit early supporter offers in full swing I want to take a moment away from heavy metal madness and go back to the Ion Age 15mm terrain range.  We released the Tower Module for the Hab Dome a while back in January and it was well received.  The module was the next step in our goal of a whole settlement in the SEORC style.

Above you can see concept art for the next pieces in the terrain range.  These comprise the IAF015E Landing Platform, the IAF015F Flak Cannon Top Mount and the IAF015G Missile Pod Top Mount.

IAF015E Landing Platform
Our largest resin item designed thus far for The Ion Age supplied in two pieces of grey tone resin.  The lower portion of the platform which acts as a support for the upper platform and features a universal ring mount to attach to IAF015 Hab Dome or Tower Module.  The upper portion is a highly detailed area for light air vehicles to land and features a blank mounting for a top mount turret.  Total width 75mm and depth 20mm.  You can also leave the lower portion separate if you wish to use the platform upper on its own at ground level or use the lower portion as a blank top for your Hab Dome in a use of your own creation.

IAF015F Flak Cannon
A twin barrelled rotary cannon anti-air weapon made of grey tone resin and white metal. Supplied in four pieces including a separate turret ring for fitting to the Landing Plaform or larger mounts (later in 2014!) or without for use on IAF015 Hab Dome or Tower Module.

IAF015G Missile Pod
A two block missile pod for anti-ground or anti-air use. Supplied in two pieces including a separate turret ring for fitting to the Landing Plaform or larger mounts (later in 2014!) or without for use on IAF015 Hab Dome or Tower Module.

These pieces will be released on Thursday 6th March 2014 with of course more information and pictures of lovely painted examples.  Hope you like the latest additions and as always with us there is little wait between idea and release.