“Is that beacon active?”

9mm rounds whined and zipped over the heads of the seven remaining members of 4th Squad. They were pinned down along with the remaining Muster from 1st and 2nd platoons. It was getting hot here and there was no way that battalion was going to get Skylark support out here in time the Yordist's had set up several Espaten portable weapon platforms which would act as anti-air batteries. The only option left to the Prydian's was to call to the sky and in fact right up into local space for assistance from their fellows crewing the ships in orbit above Grenoble II.

“Signal locked and pinging arrival in ninety seconds. The Cassillis Beauford is in low orbit and has confirmed Corbal drop on our beacon”

Help was on its way. That was a relief but it was going to be tight. The big titanium alloy box containing the beacon was pulsing with a dull red light. Reassuring and terrifying at the same time. Every beacon got only one use. Why? Well they marked the exact spot where the incoming Corbal Tower would impact and deploy. Perhaps the enemy had gotten wind of the beacon or picked up its signal as the incoming fire intensified. Even with their helmets pressed into the churned soil it was only a matter of time until they were shot or roasted alive.

“Keep your heads down and lets make pace over to the right there. Pretty soon this beacon is going to be white hot and our Yordist friends will be in the towers shadow.”

Getting to their knees and firing bursts in the direction of the Yordists they began to move. It was going to be close.

Now released and with a 10% off offer upon it to mark our birthday month for the next seven days is the IAF041 Corbal Deployable Hardpoint. A resin with white metal 15mm scale science fiction wargaming kit. It's more than a drop pod; but its not a drop ship. Its pretty unique. Its a tower than comes down from orbit or from high altitude to make a real impression on the enemy. On a column of fire it digs a crater into the ground and then settles atop it. In this static position its weapons offer cover to nearby allies and secures the immediate area. There it remains for the duration as a hard point of fortified resistance. The Corbal dominates the field!

Here is the information about this code and also the options for purchase since some of its components are available for purchase as singles and of course if you purchase three kits you get another 10% off automatically (which means this week its actually 20% off!):

TheIAF041 Corbal Deployable Hardpoint contains a resin main body which is highly detailed along with an underside piece and top piece of a turret with two weapon mounts (which fit any of our vehicle weapons for the Adder for example) there is also an engine pod for under the main body and a large crater into which the corbal can be snugly sat as it is custom made (but it also works as terrain in its own right). There are also two rail guns for the main turret mounts and four ball mounted automatic weapons for ports in the main body all in white metal. It is an easy model to assemble and its quite durable too.
Assembled it stands a mighty 90mm tall from the bottom of the crater to the top of the turret. It is 80mm wide at its widest point across the crater and the body of the Corbal is about 40mm wide.

Go HERE for the Corbal page with all options on our website.

If you would like to read a Sneak Peek posting on our blog about the Corbal which has more information and images then go HERE.

Corbal Deployable Hardpoints are controlled by the Fortress arm of the Muster of the Prydian Army or the Marcher Barons. It has a crew of two who are typically also in charge of the infantry carried by the tower. Sitting in tight harnesses there are spaces for eight infantry which means a whole squad can be transported of ten soldiers. Some Corbals are dropped into battle and then specialised Muster act in tandem with them in the ensuing fight. Others carry normal Muster or even Retained Knights. The placing of even one Corbal can readily affect the process of a conflict in progress.

This model will play a part in Patrol Angis in the second title of the series 'Khanate Returned' in which the Shia Khan Empire will be covered in all its evil glory but also additional rules for structures and weaponised structures among other things. All building on the core book which I will be talking about in the next few weeks. 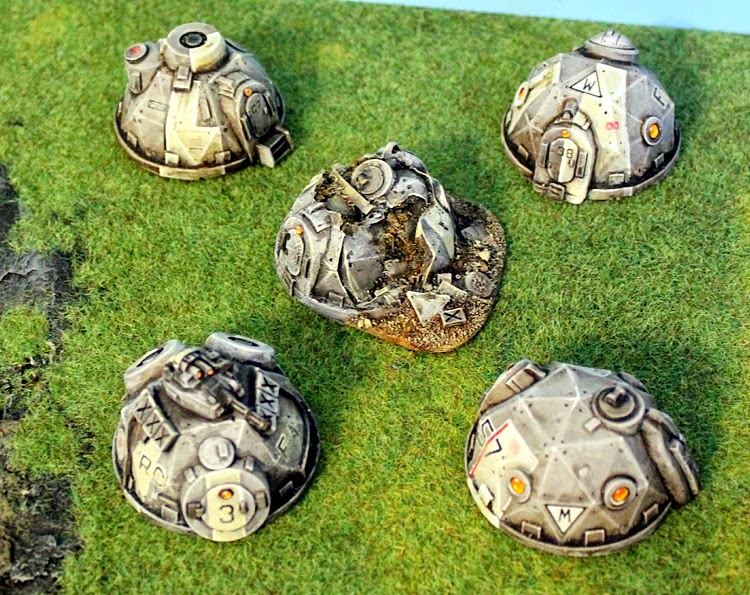 One Week to Go on Geo Shelter Offers!
Early Supporter Offers and this time we are going for an expansion on the most excellent Ion Age terrain range with the SEORC Geo Shelters. We had a sneak peek posting on these structures. We have a series of offers for you. Single purchase or small or bigger bundles as these are terrain items. Choose what you want from our website and you can get free items saving 5.00GBP or 15% off release price. A chance to assemble a settlement and save before release. The offers run until 21st August 2014.

The SEORC Geo Shelters are brand new 15mm scale resin buildings. Useful in many different settings from our own space opera to near future, post apocalypse, arctic survival, refugee camps and temporary command stations during zombie outbreaks plus many more. Go HERE.

Information Burst
We are now at the mid point of our birthday month and what an event its turning out to be. A rock solid month so far and it keeps getting better but now this is the high point for those wishing to place one order with us for maximum fun and value. Why is this? Well the Corbal is now out and released with an offer on it for one week. We are at the half way point with a week to go on the Early Support Offers and Bundles on the SEORC Geo Shelters. You get a free IMP12Starvaulter Instructor in every order worth 0.60GBP and you can get all of the previous monthly miniatures in the Year One Collection too. Lastly we are putting freebies into all orders to roughly ten percent of product value too. Just imagine...supporter offers, release discounts, free miniature, extra free goodies AND by placing an order with us you sign up for an account and earn points on all purchases which can be used later for discounts, special items and more. By the Princess that is some amount of awesome!