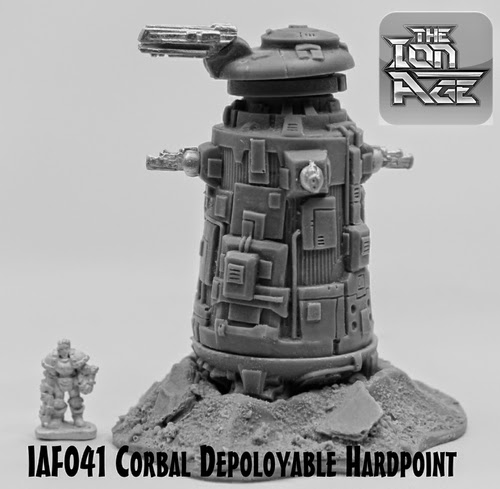 Coming your way with an introductory offer on Thursday 14th August 2014 the IAF041 Corbal Deployable Hardpoint is a resin and white metal 15mm scale science fiction wargaming kit.  It's more than a drop pod; but its not a drop ship.  Its a tower than comes down from orbit or from high altitude to make a real impression on the enemy.  On a column of fire it digs a crater into the ground and then settles atop it.  In this static position its weapons offer cover to nearby allies and secures the immediate area.  There it remains for the duration as a hard point of fortified resistance.

The Corbal kit is a fun number of pieces for an easy assembly wargame model that is really unique and useful.  The parts are as follows and refer to the numbers in the parts image.  Number One is the Corbal Crater in which sits the assembled Corbal Tower when it is in play.  It can also be used as a stand alone terrain piece in its own right which is great!  Number Two is the main body of the Corbal with a flat underside for the engine pod and a rotation mount on top for the turret; its covered in detailing and armour plating.  Number Three is the engine pod for placing beneath the Corbal body and fits snugly into the crater as well; it has main engines and guidance thrusters too.  Number Four is the underside of the turret which attaches to the top of the Corbal body and allows turret rotation in play if desired.  Number Five is the turret which has two mounting points for main weapons (the Corbal is supplied with two Fretan Rail Guns but can mount any turret weapon from our Adder vehicles).  Number Six composes four white metal ball mount Angis 12.5mm guns which attach to the four points on the Corbal body for anti-personnel fire power.  Number Seven is two Fretan Rail Guns for mounting into the main turret.  As we said any turret mounted weapon from the Adder Combat Vehicles will fit the Corbal too. 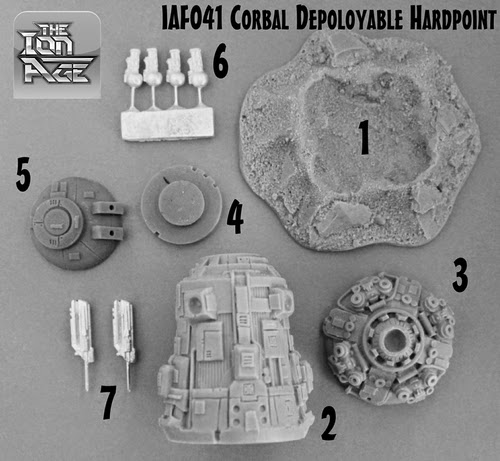 The top in this blog post shows you the impact that the Corbal can make on your wargaming table.  Assembled it stands a mighty 90mm tall from the bottom of the crater to the top of the turret.  It is 80mm wide at its widest point across the crater and the body of the Corbal is about 40mm wide.  In the image you can see the 15mm Noblesse miniature which is 17mm tall to top of head for scale.

We imagine that a Corbal Deployable Hardpoint is controlled by the Muster of the Prydian Army or the Marcher Barons.  It has a crew of two who are typically also in charge of the infantry carried by the tower.  Sitting in tight harnesses there are spaces for eight infantry which means a whole squad can be transported of ten soldiers.  Some Corbals are dropped into battle and then specialised Fortress Muster act in tandem with them in the ensuing fight.  Others carry normal Muster or even Retained Knights.  The placing of even one Corbal can readily affect the process of a conflict in progress.

This model will play a part in Patrol Angis in the second title of the series 'Khanate Returned' in which the Shia Khan Empire will be covered in all its evil glory but also additional rules for structures and weaponised structures among other things.  All building on the core book which I will be talking about in the next few weeks.  Thanks for your patience after the playtesting I am working hard almost every day and getting further and further with it.

As a personal point if you love the idea of the SEORC Geo Shelters early supporter offers but you fancy this brand new bit of awesome too I recommend that you place your order for both at the same time on the 14th or within a few days later.  That way you get the shelters, the Corbal, the monthly free IMP12 Starvaulter Instructor and freebies too!  Don't think you have to listen to me but again you will find me one of the friendliest fellows out there and it makes sense to me.

Thanks for Reading about our biggest, literally, coming release thus far in our birthday month August 2014.