When the Ion Age went live back in late August one of the first lots of wargamers requests we got went along the lines of 'please, please, please make female versions of your 15mm Retained Knights' oddly enough we were planning on doing this but we were going to begin with the Muster and work up to the power armoured Retained Knights of Prydia.  We are nothing if not flexible so we went back to the concept board and started work on that premise.

The Prydian Army and those of the Marcher Barons such as Yordan and Canlaster have a great many troops from the lowly to the exaulted.  But what gender are they?  Well unlike some other wargaming brands that make the future a male playground I am much more for equality.  After all with the right training women are in the armies of the present day so why not the future.  In the Prydian Precinct fighting skills and the following of the Code Gallant count for more than gender so female Retained are more than possible they are a certainty.  Depending on the Regiment or the Baron they could be a small percentage, an equal percentage or actually a majority or all of a force.  Put them alongside the male knights in the same roles.

Our lead designer Sam Croes imagined that Alwite (the powered armour worn by the Retained) worn by female Retained would have the same abilities and purpose but it would be refitted to better serve a different body shape and physical needs.  He imagined that a female shape would mean a slimmer waist, a vastly different upper chest area and different hips.  In 15mm scale the differences would be minimal for the legs and waist areas with only the upper body being significantly different so additional detailing for movement was put into the stomach and ribcage parts of the armour which would stand out even at a size of a few millimetres.

It was time for some full artwork so Sam Croes created this image which we are considering selling as a poster if people ask for it.  You can also check out Sam's posting about this image on his Deviant Art public profile.  She is Ylona of Prydia! With the concepting and lovely artwork done it was time to move onto the design stage and think about what 15mm miniatures were needed.  Sam and I wanted to integrate female knights straight into the existing and future male knights (no secrets on those getting spilled today!) so they would need several codes to get them up to speed.  A full IAF code of ten poses of female Retained, an IAF code lance command of five poses and also a special command IAF code of characters. 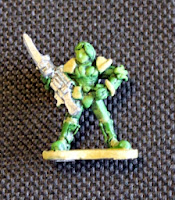 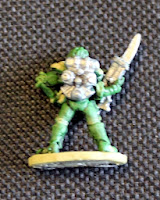 Above you can see two views of the first sculpt by Sam based on the concept art that topped this post.  A combination of 'green stuff' and 'milliput' along with the stock master white metal parts of the Angis Rifle and Back / Jet pack.  The differences in the armour require full modelling.

The final packs will feature Knights with Angis Rifles, Anvil 888, Moth Type 12, Tumbler SMG so a solid range of weapons and most will be bare headed to show that they are ladies.  On top of this we will have officers and specialists and also characters.  Personally I also want to pay tribute to the grand queen of science fiction female icons so expect a Pardoner Flame Projector and a bad attitude towards banana headed extra-terrestrials!

If all goes according to plan we expect to begin releasing these codes, beginning with the ten pose pack in late October with more codes following across weeks from then.

So we do listen and we welcome suggestions.  The Ion Age is expanding at a massive rate believe me not only at the rate of one release a week but sometimes more and also more than white metal miniatures...

Thanks for your time and attention.