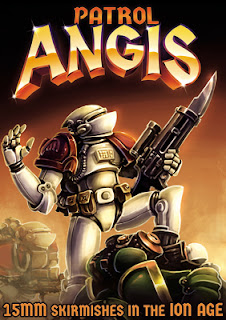 'Those Cannies are nearby.  Thermal is damp in this heat but they will have their chameleon circuits engaged so use visual spectrum scanning only.  Helms locked and secure, keep data burst to a minimum, command only from this moment in.'

The Prydian Army patrol moved into the thickening jungle with a practised loping gait that well suited their bright white and red Alwite powered armour.  They moved quietly despite it and the jungle floor.  As knights of the 512th Regiment they had seen a lot of action in the last three months on Jualdore IV.  A horridly hot world that was murderous on Muster troops and as a result most of the fighting outside of the main spaceports fell to the Retained whose Alwite could hold back the heat and allow the freeing of the world from the League of Canlaster.

Protect Life when Life needs be Protected was foremost among the guiding principles of the Code Gallant, the code by which all Prydian and a lot of rebelling Retained live and this meant warring on as limited a scale as possible.  It also secured the loyalty of the mass of people as well as when it was possible the war was kept away from them.  There was precious little prime real estate in the Precinct, even planets like Jualdore and to go around using nuclear seed and nano burst weapons would reduce it even further.  Soon in warring like that humanity in the Precinct would be reduced to scarred rock and sealed domes drinking sewage resyc water.  So this civil war was fought by men and women in the knowledge that they wanted a life after it was over.  Not that they were scared or weak far from it...it takes courage to raise a rifle and not press a button from orbit.

'Neuer take the safety off the Hermit and warm it up.  The Cannies are close; call it a hunch.  I want the plasma in play as soon as they open up.'

The patrol fanned out into four demi's of five knights and engaged their own chameleon circuits.  The circuit took a lot of power and even with it on they were far from invisible.  Dirt and dust and damage weakened its effect but used well it could make the difference between victory and death.  Holding back their Sarj activated his own circuit and made an active scanning pass over the area ahead looking for signatures.  His helm brought up pings in blue only a hundred metres ahead.  Camo on but the signature was strong.  Canlasterian Retained!

'Neuer!  A hundred out and thirty off to your left.  Hit them!'

With a thrum and then a sizzling roar the Hermit 44mm Plasma Rifle shot a sphere of blazing bright plasma at the target area and as one the patrol's helms auto-activated dampening in their visors to protect eyes.  Before the sphere covered half the distance there was a blur of movement as twenty or so enemy Retained spurred from statues into rapid action.  Without waiting for an order the Prydian's opened fire the thunder of 12.5mm AP Angis rounds filling the jungle air.

'This is the part I love.  Target free and then put holes in those Cannies.  For Cyon!'

A while ago on this blog I posted about 1 Hour Play and that The Ion Age would be working up towards its first 15mm scale skirmish wargames title and that it would be called Patrol Angis.  Well the time has now come for me to show you not only the stunning art for the book cover by Sam Croes but also to say that the time is near for play testing.

Patrol Angis focuses on one platoon of miniatures per force with a player controlling one or more forces in play.  Its fast and furious and rather different.  Easy to learn but tactically challenging.  A hint of space opera but also grounded in reality too.

Using the often overlooked D8, eight sided dice, the brand new engine that powers Patrol Angis has been tested out here but I am looking for a dozen or so keen wargamers to try it out themselves.  That is solo or with one or two others.  If you are interested in getting a PDF copy of the core mechanics by email and throwing the diamonds (cubes for D6's same idea!) for a few hours and telling me your thoughts on the questions provided then EMAIL me and I will let you know. I have three confirmed already (keen lads those!). All those selected who report back will get a mention in print and also a wee goody bag in the mail from me personally upon release.

I will follow up on this post with more information and play test period once we have everything sorted out.

PLEASE READ THIS
May 2019 and The Ion Age has been taken back into Alternative Armies.  It continues with new releases into the future!  Go to Alternative Armies for Ion Age pages of the 15mm Range the 15mm Terrain Range the 28mm Range the Publications range and the Free Downloads collection too for the latest.  All links to the ion age site are now defunct sorry!  If you wish to see something or ask a question email me on sales@alternative-armies.com.  GBS
Posted by Gavin Syme (GBS) at 18:16