“You want to get into the Patrol lad?  Well its not for everyone but lets see how you measure up eh.  Ok.  First off where you from and how long you been in?”

The gnarled Sarj looked the young Muster trooper up and down.  He noted the slight fade on the cloth of the trooper's uniform and the dents on the Aketon ribs  that protected  his torso from ballistic and blade based attacks.  The Sarj had been measuring troopers in all their dimensions for more than two decades and he was proud of his skill in picking those right for duties in the Patrol.

That got the Sarj's attention.  Not only that the trooper easily had the one year service in Muster ranks needed for application but that he was from the now destroyed moon of Rikergast.

“You got the time trooper.  Shame about your home though.  I been to R'gast back in 19' nice place.  So seen any active?”

The trooper's gaze hardened at this.  Not many had been to his home.  An out of the way place known for ore mining.  Or at least it had been until the League of Yordan had cratered the domes and vacced the whole place.

“I was on Hakke and I did a tour with the 903rd taking down the droid works at Farnborough VII.  So yeah, I seen some action.”

Nearly there though the Sarj.  The trooper had the time in service needed and he had seen a tour with combat.  That was two of the three requirements and now for the third and most over overlooked by those wishing to enter patrol service.

“You got the scars trooper.  How you feel about about leaving your friends in the ranks and going where it's sharpest?”

The trooper had been expecting this question.  If you joined the Patrol it was not only a way to leave all you ever knew as the Patrol were like the Retained and were sent any and everywhere but also a quick way to get dead.  The death rate in this arm of the Muster was higher than any other.  But there was no finer place for adventure, for potential rewards and also for advancement.  More than anything the trooper wanted to join the Retained as a Varlet and being in the Patrol was the best way to do it for him.

“Sharper the better Sarj.  Any time, any how, any where.  Sign me up.”

The Sarj gave a wide grin and lifted the data pad hooked to his belt.

“Put your mark here lad and its done.  You just did the best thinking of your days.”

IAF022 Muster 1st Patrol
This week sees the first of many planned releases into the most glamorous and dangerous arm of the Muster; The Patrol.  The Patrol is a vast number of regiments of troopers who all have time served combat experience and act as a front time aid to Retained Knights and also in their own right.  This squad of ten brand new white metal 15mm poses is composed of a low ranking officer with Moth Pistol, several poses of trooper with Moth Rifle, with Tumbler SMG and a couple of with heavier weapons the Anvil 888 and Charlatan 22mm Launcher.  Wearing Aketon armour and Patrol helmets this is a central squad for a patrol platoon.  As always this code can be bought as a pack or as single miniatures or select the three packs and save 10% option on the page.   Price 5.00GBP per pack.

This is our first Muster new release and its the first of several that will feature in the first quarter of 2014.  We plan on expanding the Muster Patrol with a command pack and other packs allowing an entire platoon's worth of miniatures all in unique poses.  If you have suggestions such as female Muster Patrol then drop us a line we would love to hear from you. 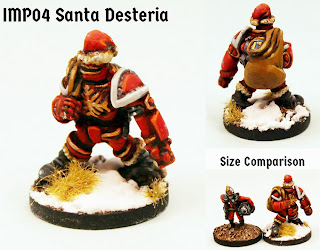 Information Burst!
This pack will be released on December 24th 2013 as part of our Xmas Releases and Special Offers set across four days (24th to 27th) at a 10% or 20% saving but unlike the special offers this pack will continue to be around forever after the event ends.  IMP04 Santa Desteria is around until 1st January 2014 before being retired and you get it free with any and all orders.  Remember when you place an order with us you will be prompted to join the loyalty scheme which will earn you Reward Points on all purchases which can, once accumulated, be redeemed for discounts and special miniatures.  This loyalty scheme is well worth joining and so far we have hundreds of customers and more than a hundred thousand points that have been redeemed.

May 2019 and The Ion Age has been taken back into Alternative Armies.  It continues with new releases into the future!  Go to Alternative Armies for Ion Age pages of the 15mm Range the 15mm Terrain Range the 28mm Range the Publications range and the Free Downloads collection too for the latest.  All links to the ion age site are now defunct sorry!  If you wish to see something or ask a question email me on sales@alternative-armies.com.  GBS
Posted by Gavin Syme (GBS) at 16:55