Perhaps history would have been different but for Hugo Sevaris.  He had opened the door, he had activated the Matter Gateway and he had passed through it.  He was the only man to have seen the world it connected to, perhaps the only man ever to see a Khanate world.  No one will ever know for the only part of him to return to the vast underground cavern was his head and along with it came the start of a seemingly endless invasion.

The sparkling connecting beam was cut more than halfway through when the head of Sevaris was thrown through the gateway to bounce and roll to the feet of the now cowed group of scientists and researchers.  They had already sent a runner with an urgent message to bring every soldier of the Camarthen Planetary Militia to the Belkus Grand crater and to destroy or otherwise seal up the now active matter gateway.  Those militia troops were now approaching from all over the planet aboard their grav platforms and the nearest were even entering the far end of the cavern as the severed head was propelled through.  It was less than a minute before more creatures followed the remains of Sevaris back through the gateway and into Prydian space.

Blinking into existence from the purple light of the gateway came ten figures dressed in shimmering red suits, their faces covered with helms and their hands holding vicious looking rifles and carbines.  Their suits flexed and glimmered in many shades of red as they moved almost as if it was their very skin.  One removed his helm with a hiss of broken pressure seals, its eye pieces changing from an illuminated yellow to a dead black as silken threads snapped apart.   Placing the helm in the crook of its arm the Khanate soldier simply looked at the cowering humans.  Its two eyes a vivid lilac and its ears peaking to points the soldier turned its gaze to the rest of the platform and the boundaries of the cavern that receded into the dim distance.  None of the aliens spoke and though humanoid in appearance they could not be men; their faces along the length of their arms and legs plus the curious grace with which they moved marked them out as something else altogether.

The gateway blinked once more and a group of short and evil looking creatures clutching pistols and stubby carbines emerged on to the platform.  Wearing some sort of quilted metallic jerkins their dark green skin made them look imposing even as their eyes gleamed with a fanatical zeal.  These things also were alien they had a foul smell and spat continually onto the black surface of the platform.  They gibbered to each other in a tongue that make no sense to human ears and waved their weapons in the direction of the researchers.  A single look from the graceful alien who had removed his helm brought them to instant silence and order.

A third and final flash from the gateway brought forth one more alien creature.  A giant, fully over three metres tall.  Its whole body humanoid in appearance but even under the same sort of shimmering suit the graceful aliens wore the humans could see great bunches of muscle driving it forward.  Each step sounded with a thump as it advanced away from the purple sphere of whirling energy.  As it moved it swept a very large nine barrelled weapon in front of it.  Stopping to the right of the still silent helmet less alien there was not a sound to be hear other than the eerie crackling of the active matter gateway.

Silence fell over this meeting of two civilisations, but only for merest moment.  The alien soldiers in red open fire with bolts of blue laser fire upon the cutting laser that was working furiously to sever the connecting beam that kept the gateway active.  It exploded into a myriad of fragments leaving the beam intact and the gateway open.  The giant stepped forward and the barrels of its weapon began to spin.  The researchers screamed and scattered just as the first salvo of Anvil 888 rounds from the Camarthen Militia lobbed from the edge of the platform impacted all around them and the Khanate soldiers.  With a sound like a demon being tortured the multi-barrelled weapon fired; its muzzle flash more than two meters long.  The researchers died and many of the rounds crossed the cavern and impacted on the far wall where more than a dozen platoons of Planetary Militia were passing through the door while others desperately tried to close it.

Extract from 'The Khanate Return' by Gavin Syme GBS for publication in 2014.

PIA02 Matter Gateway Nox
Its been some six weeks since we released our first post print of artwork from The Ion Age and as we said then, and its been proved with some very happy customers, wargamers want good posters for their walls. We present our second poster print by Sam Croes of a Nox Trooper emerging from a Matter Gateway. Printed on high grade 190gsm poster paper with rich inks here in Scotland each poster is just over A3 in format with a white border. Perfect for your wargaming walls or office.

The Matter Gateway Nox was inspired by the story of the the traitor Hugo Sevaris in the history of The Ion Age.  Each Poster Print is 5.00GBP and as always we offer a 10% discount for three purchased at the same time plus as a special treat you can get them signed by the artist too!

If you would like to see the first Ion Age Poster Print PIA001 Ylona of Prydia you can see it HERE on the Ion Age website.  Its proved rather popular so far.

We are not having an Early Supporter Offer this month instead we are having new releases and some super special offers on some codes too.  More on this next week but for the moment we are offering 10% off the Nox miniatures on the website.  So until the 12th December the discount is applied on the page, just add to your cart and yes this is applied on top of the normal 10% off for three pack purchase.  Awesome!  Perfect with the new poster print. 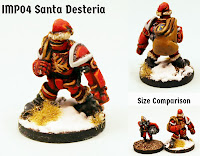 Information Burst!
The Knight of the Dead is gone and while it was our most popular free miniature so far it is now the time of IMP04 Santa Desteria.  This adorable armour plated gift giver is free in all orders until 1st January 2014 when it will be retired and replaced.  We will not be having Early Supporter Offers (ESO) this month but rather some specials on existing and new releases the first of which is on The Nox as explained for one week.  We will be continuing the release schedule as normal with only a small break in late December for Chrisrmas and a few days rest for us all. Remember when you place an order with us you will be prompted to join the loyalty scheme which will earn you Reward Points on all purchases which can, once accumulated, be redeemed for discounts and special miniatures.

Ion Access Port
The fiirst article in the Ion Access Port will be appearing once I have it ready.  Due to work commitments for Alternative Armies its not quite ready yet. 'Fabricators in the Ion Age' will be followed up with a concepting post on the pride of the Retained...the Duxis Battlesuit.  The article will be published to the blog so make sure you bookmark or follow it.

PLEASE READ THIS
May 2019 and The Ion Age has been taken back into Alternative Armies.  It continues with new releases into the future!  Go to Alternative Armies for Ion Age pages of the 15mm Range the 15mm Terrain Range the 28mm Range the Publications range and the Free Downloads collection too for the latest.  All links to the ion age site are now defunct sorry!  If you wish to see something or ask a question email me on sales@alternative-armies.com.  GBS
Posted by Gavin Syme (GBS) at 12:13