IMP03 Knight of the Dead as Baron Samedi 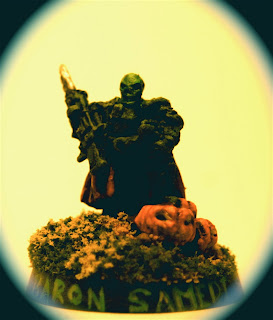 I got an email from Chad Thorson this morning with a link to his blog.  As an IonFan he got a casting of the free IMP03 Knight of the Dead during November 2013 in his order and he has gotten around to painting, picturing and writing about it online.   Here is an extract from his posting to go with the above image.

Rumor has it that his flagship Surtur space fold system failed and ended up bouncing ship and crew through a hellish gateway.  Forever altering Samedi's body giving him the grim glowing green skull face, striking terror in his enemies.  It's also known that the Black Watch Knights that accompanied the Baron on the Surtur were forever sealed inside of their armor.  Nobody knows how they eat or live but some supernatural force has given them powers unknown to humans.

If you have pictures or fiction about Ion Age products then drop me a line I would love to see what you have been up to and I know others would too.