The Lance is the backbone of a Retained Regiment whilst it is among the stars and while it is couched amid the crenellations of its home Cassillis.  A tightly bound armour knot capable of performing any deed assigned to it.  While it is true that a Varlet can come from the common folk; in the main the sons and daughters of the nobles provide the ranks of the Retained. While they do not aspire to the lofty idealism of the Starvaulters the Retained adhere to the Code Gallant at all times. Unlike the platoons of the Muster or the planet bound defence force platoons the Lance carries its own weight without others to aid.  Able to deal with almost anything the Precinct can array against it the Lance makes use of the trusted Angis 12.5mm AP Rifle with attached bayonet as well as the  Anvil 888 multi-load launcher and many other arms of war.  Taking on three times their own number or more with lesser foes the knights of a Lance will deal death to alien threats and those of the Marcher Barons alike.

Twenty Two Varlets, Esquires and Jupons are couched in a Lance and from there it is the Knight in command to makes the choice of their roles.  In the course of normal battle the Lance will split into four Demi's of five with a command element allowing for maximum balance between spread of troops and fire power.  Against mightier foes such as battlesuits or vehicles two Posts of ten are formed reducing coverage but increasing fire power backed by two in a command element.  For sweeping away remnants the Lance will break up into Mina's of two giving away concentration but gaining the ability to search everywhere as it advances.  While most Lances will learn to fight together and remain as an entity there will always be replacements for those who fall in the fight.  As well as replacements there is the clause in the Code Gallant which demands a knight offer those upon a Quest or seeking the Truth a place amid his or her ranks.  It is not unusual to find a Knight Errant or a Banneret as a temporary member of a Lance.

Trust to the Lance.  Learn to wield it and to have it reach out and strike down the enemy.  Your Lance will be one among many or even hundreds committed to the cause in hand but it is yours to balance and poise.  Look to it and attend to those in it.  By the Code and by the Lance!
Academy Auto-Trainer Series 52, New Glastonbury, 4335IC 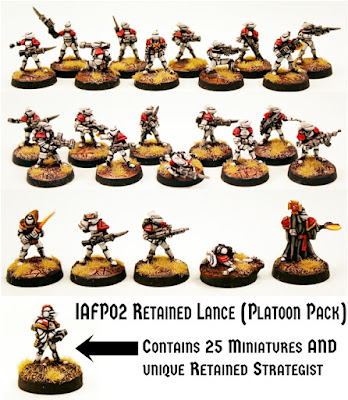 Its summer time and the air is ripe for 12.5mm AP rounds all around you.  That's right its the first of our two weeks of releases for July (next week for Troop Element Trays and Bases) and its one which supports our skirmish level wargaming title Patrol Angis with a complete force to use on the table at great value.  Build your collection around it. Plus its got a unique miniature in it which is a free bonus!  IonFans let me present to you...IAFP02 Retained Lance!

IAFP02 Retained Lance
This pack gives you a full Lance (platoon) of power armoured Retained Knights as well as a unique miniature only found in this code.  If you want to field a full force suitable for skirmishing then this is the code for you.  Twenty five different miniatures which are IAF001 Retained Post Alpha, IAF002 Retained Post Beta and IAF004 Retained Lance Command Alpha. On top of this you get the unique miniature which is a specially trained Retained Knight who wears the helm and carries the data pad of the Strategist, which is found only in this pack and what's more its free within the pack.  Excellent! As always this code can be bought as a pack or select the three packs and save 10% option on the page.  Go HERE.  Price 12.50GBP per pack.

Interested in the Retained?  Space Opera Knights of our far future...course you are!

Information Burst
This is the first of our two weeks of releases in July 2015 and next week we will be releasing all of the resin Troop Element Movement Trays for use in Patrol Angis as well as two packs of resin bases suitable for use in the game system and with our miniatures too.  It seems the IMP23 Vending Bot has been a real hit with new customers coming in to pick up half a dozen at a time plus of course they get their free one on top of that.  Additionally if you have not already signed up for our Mailchimp mailing list you should (its the top right box on our blog home page and its free) as loyal IonFans who are on the list now have access to a monthly deal only seen there and its proving popular.  As we are nearing the end of Year Two (yes already!) for The Ion Age we will be pre-viewing the Year Two Collection soon on our blog.  This is a set just like the Year One Collection which allows you to purchase all or just singles of the previous year's free monthly miniatures if you want more of them or just missed them the first time around.  Following up on the excellent free PDF for the Planetary Militia in Patrol Angis last month we will be having another free PDF this month...on the Shia Khan Empire.  Thanks for your custom and for the kind words about our products we do appreciate it.  We work hard and we want you all to have fun with your wargaming in our space opera setting.  Finally remember that by placing an order with us you will sign up for an account with the website and that means you get Reward Points in all purchases and the free monthly miniature too.  These points can be used any time to get free products and discounts on orders.