"A matter gateway is active on Camarthen IV. Losses are mounting, send everything; everyone.
Send them now.  The Khanate have returned."

It has been a quiet month here at The Ion Age.  In fact the quietest month since we began this new space opera adventure...at least to all of you out there in the world.  While our blog and our website have been silent since the first days of December we have been busy working away at what will be coming your way in the first months of 2017.  With Patrol Angis and Callsign Taranis both released in print and as digital downloads for wargamers we are working on the third book in the One Hour Series.  We are working on...The Khanate Return! 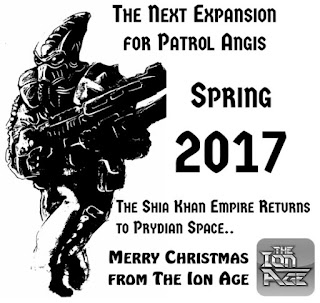 The image here is a teaser, a taster.  In fact a concept sketch from back when we released the first new 15mm Shia Khan codes back in our first year.  Codes such as IAF018 Legionaries along with an entire Legionary Ordos (platoon) and the same for the Malig Space Goblins and the Nox power armoured troops.  We added Warlords and we put in the crazy Infernus Ball Tank too.  Enough for a flavour, for IonFans to get a feel for the Shia Khan Empire.  Next year we will go much, much further than this.

Building up to a new book in print and as a digital download we will be releasing new deeper Shia Khan codes.  We will show you parts of the book and we will show off concepts too.  Beginning in January there will be more infantry and infantry sized vehicles before we move onto portable weapons and special units too.  The Khanate will have their own vehicles with their own design ethos.  Your Taranis Tanks and your Duxis Battlesuits will find foes of an alien nature!

The Khanate Return book will take in not only the expansion rules for all Empire forces in Patrol Angis but also the forces of the Planetary Militia as well as the campaign for control of the Camarthen star system and the battles for the Matter Gateway and Pelacan City.  A desperate last stand against hopeless odds...

It is going to be excellent fun!

Remember all orders this month get IMP40 Rudolph the Reindeerbot free automatically (Festive Insanity eh!) plus our current special offer is 25% off Espaten Portable Weapon Platforms all variants. 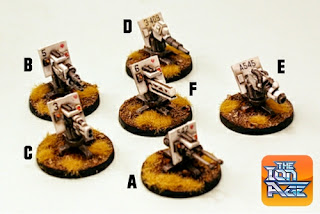 Both of these stop come 1st January when we welcome the new annum and the cold of winter true...

Merry Christmas and all the best for the New Year too!

IMP40 Rudolph the Reindeerbot free for all December 2016!

“Welcome to festive time!  The last month of the year and as we go towards Christmas and the only time we take a full week off it gives me awesome wargame pleasure to present the next festive themed monthly free miniature.  Santa Desteria and his sweet friend Missiletoe Claus along with the Chrimbot are now joined by Rudolph the Reindeerbot!  Those who have been IonFans since we began have been asking increasingly what the theme months will bring and I don't like to spoil surprises so in adding to the 15mm oddness we have our fortieth month and forth Xmas mini and it is a robot red nose which will fit in well with your other Christmas miniatures and in any more mad scenarios you wish to run.  Merry Christmas everyone from here in Scotland!”

Each December we release a fun festive miniature (January sees deep cold theme) so welcome to the 40th month and our new 15mm robot.  It is free in every order every time all month before being retired. This miniature is automatically put into every order at the rate of one per order regardless of order value. It can also be bought in any amount on the monthly IMP page of the website for this month only too before being withdrawn on the first of next month. We are into Year Four now and if you missed it you can see the Year Three Collection on the website. 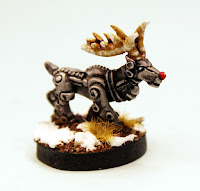 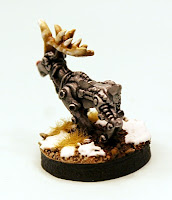 This month's miniature is a superb character robot by Sam Croes.  Standing 16mm to the eye line it is a titanium skeleton with sharp antlers and a ruby nose. There is a growing page on the Ion Age website where the current and all former IMP series free miniatures are shown so that you can see what came before. Enjoy looking at what came before.

Above you can see the now online IMPS03 Chrimbo Set which has all four Christmas themed miniatures in one code.

We ask you to sign up for a website account with us on your first order. Why? For one reason only. Not to send you emails (we never will. If you want our emails sign up for our Mailchimp list on the right top of the blog home page) or to pester you; but only to keep track of the Reward Points that all orders with us earn. Reward Points through our online partner Sloyalty which can be used once accumulated to get discounts or free stuff at any point in the future. Learn more about this HERE. Every order earns Reward Points! Yes free extra value. Part of our promise to keep the fun in wargaming.

Information Burst!
December is our quiet month of the year and we do not have any releases beyond what you see in this article this month.  I want to thank everyone who took us up on the Four Day Awesome Offer end of last month we now have to actually replace the molds for the IAF30 Duxis Battlesuits which was something you really all enjoyed with last month's special offer (we have a new one see below). Work is continuing between myself and Sam Croes upon the third book in the Patrol Angis series and the miniatures too for the whole Shia Khan Army building upon what we already have.  More on this in the new year; it is going to be ruddy epic! 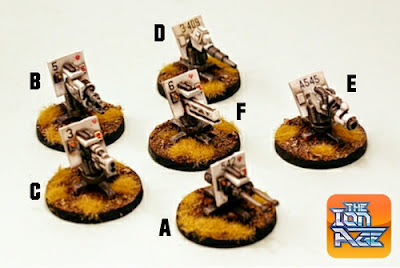 Lastly we have a new month long special offer...this time to get your infantry some sweet portable back up in the field.  All the six variants of the IAF046 Espaten Portable Weapon Platforms are 25% off list price.  Remember you can also get Repulsar and Tracked propulsion units for your Espaten too.  We have a Retained Knight and a Muster crew packs for them as well.  Click on the links to learn more. 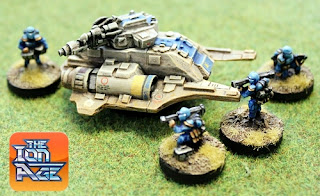 As always if you are reading this bulletin later in the month or further into the future please do have a look at our blog and use it as a time machine to read all the excellent content that is there going right back to our start. Try August 2015 for instance when the SuperBlue came forth!

Thanks for your support and for enjoying The Ion Age...let it snow, let it snow....