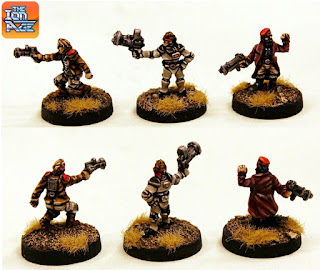 There will be a new talent coming into the space opera universe of The Ion Age next month. Dave Foley is a new designer from the United States of America who was so impressed with the idea of a new science fiction setting that offers something different as well as a soul and rewards its supporters that he pitched us an idea. An idea for a whole new range within the 15mm ranks of The Ion Age. Once he had explained it and shown us some concept sketches we were very happy and I am sure that once you hear what Mr Foley will be sculpting that you will be too.

Our lead designer Sam Croes has given Dave Foley a free hand to create those miniatures which are not of the Prydian Army, not of the Marcher Barons and not of any Condot mercenary force. In short the non-military. The civilians, adventurers, law enforcement and more of the Prydian Precinct. Humans and perhaps more including robots that will be releasing as themed small packs with single miniature option for purchase. 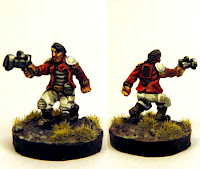 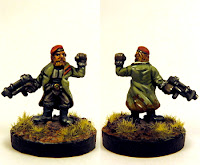 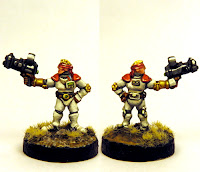 The non-military range will be on its own page of the website beginning in November 2015. We aim to release a new pack into the range every month and we will be beginning with two packs to mark the start of the range and these will be 'Adventurers and Rogues I' and 'Starport Staff'. All complete original sculpts by Dave Foley in 15mm scale and suitable for all science fiction settings. Questions and comments are welcome to info@theionage.com.  Images in this article are all from the first pack of Adventurers with the header image painted by Sam Croes and the single images painted by Dave Foley himself.