“What I remember were her eyes.  Not her height nor her blood red armour.  Not even the brilliant white of her hair tied up upon her head and the points of her ears.  I saw her for but a moment but it is burned into my mind just as the screams of my fellow knights are in the midst of that battle.  We had cleared the area and had in fact swept it twice but the glimmer suite of the Segmentum armour and the skill of our foes had kept them hidden from us until we through ourselves safe.  Beams and blasts shattered my lance and I fell wounded in both legs.  They must have thought me dead for I thought it myself when the Nox stood over me and removed her helm.  Her eyes violet and black and without compassion or pity.  Perhaps she honoured me, perhaps time was short, perhaps she just wanted to see the sky after days closed up.  I know not.  Beauty.  Beauty and Death are the Nox.”
Jupon Tarl Manelle, 68th Regiment, Ignut Refinery Complex, Camarthen Prime, 4331IC.

Welcome to the month that promises to be a total score for fans of the Ion Age and of damn fine 15mm armour in the form of main battle tanks as well.  October 2015 for us presents the next of our monthly free miniatures IMP26 Female Nox Trooper. For the whole of October this 15mm miniature is automatically put into every order at the rate of one per order regardless of order value.  It can also be bought in any amount on the monthly IMP page of the website for this month only too before being withdrawn on the first of next month.

The Nox are the heavy hitters of the Shia Khan Empire's infantry and are more than a match for a Retained Knight on a one to one basis.  Given the job of smashing a hole in the formations of enemies across the galaxy the Nox carry weapons to use that are typically the support role of two Legionaries with one acting as the gunner and the other as the loader or energy pack carrier.  We have three packs of Nox two of troopers and a command pack too.  You can see them HERE.  This free miniature makes a perfect addition to them. Wearing Segmentum powered armour this female alien trooper has a Hydra Laser Shotgun and her helm under her arm.  The miniature is one piece in white metal and stands approx 19mm tall. A great leader for your force or character. 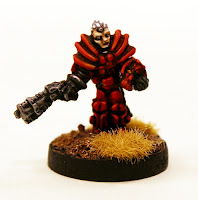 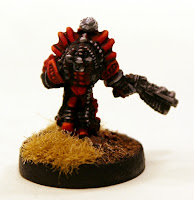 We look back at what was going out free this time last year and now also in our first year too.  In October 2014 it was IMP14 Female Retained Veteran and in October 2014 it was IMP02 Retained Knight with Power Fist.  You can get them in the Year Collections of formally free on our website HERE but if you click on the links over the codes you can see the blog post from that month and year and see what else we were up to at that time.  Time flies and sometimes we forget and I always enjoy the new month update and to look back at last year and further...so much done and so much still to do! 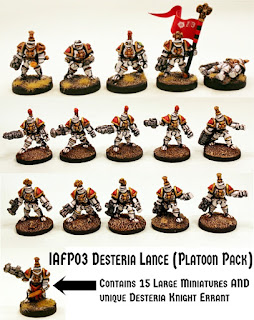 September had two salient points which had IonFans talking.  The first was the release of a command pack (IAF075) and platoon pack for the mighty (IAFP03) Desteria Knights which saw these walking weapon platforms raised to a full force.  The second was of course the articles on the coming of Bob Naismith's awesome Taranis main battle tanks.  There are still a couple of these to come but October will see an Early Supporter Offer (ESO) on Taranis happening in the first week of the month! 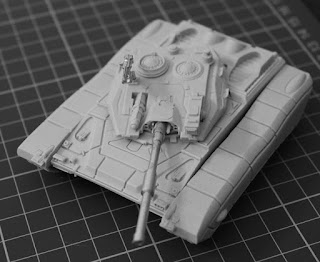 Full details to come of course but the Early Supporter Offers will feature a choice of levels along with savings and also free items too.  Excellent!  The ESO's will end before the end of the month with all orders placed for them shipped out worldwide at the end of the promotion period.  Watch this spot!