“Put him down or put him out of his misery Donovan, we got places to be man!”

The barrel of the Valerin laser cannon on the arm of Donovan's Havelock type 57 battlesuit glowed a dull red in the early morning light. It had been firing almost constantly for fifteen minutes and was near its tolerance levels. Held in the massive fist at the end of the battlesuit's other arm a Desteria Knight hung limply the green and yellow noblesse powered armour crushed by the pressure of the grip. Sarj Guyan Donovan had picked the armoured man up and shook him like a rag doll.

“Sure thing. Just getting us some payback for Ipsen Field. Where next?”

Ipsen Field, a battle fought less than a week ago between the 503rd Muster Regiment of the Prydian Army and the knightly retinue of Baron Devlan Hugonan of Yordan had been a defeat for the soldiers of the Addan. Baron Hugonan had sprung his surprise in the midst of the fray revealing several lances of heavily armoured Desteria Knights with firepower that the Prydian Muster had trouble stopping. By the end of that day thousands were dead and those loyal to the throne had been thrown back in disarray.

But the Addan Council had a surprise of their own and had lured the Yordist Desteria back to battle this morning. Instead of lightly equipped Muster the knights had found waiting for them a dozen of the brand new Havelock battlesuits piloted by the best that the academy back on New Glastonbury could offer. Courage had turned to terror as the Desteria realised that their own firepower was now not top of line. The Yordists had managed to bring down one of the battlesuits but it had cost them their lives and only a few had escaped the trap.

“Not so tough now are you. See how you like being the little guy for a change.”

Donovan tossed the Desteria Knight away like a discarded Happy Burger carton and checked the dropping heat levels on his laser cannon. The weapon had proved its worth melting through the titanium skin of the noblesse armour with ease. He had not even had to use his top mounted missile pod yet.

Off in the distance the stomp of heavy footsteps spoke of a campaign being lost by the League of Yordan.


The IAF020 Havelock Type 57 Battlesuit comes in several variants and it takes The Ion Age into the realm of small vehicles. The 'Big and Tall' IAF020 stands legs splayed, without the optional missile pod attached at 30mm tall. It has a separate arm mount for a heavy weapon. Cast in white metal it requires some assembly. Great value at only 5.00GBP per kit and all variants can be bought as a single pack or select the three packs and save 10% option on the page.  Plus a weapons pack option too.

Here are the different varients:

IAF020A Havelock Type57A 'Anti-Infantry'
This code contains one white metal battlesuit kit supplied with a Moth 88 Rotary Cannon and an optional Anda Missile Pod for arm and back mounts.

IAF020D Havelock Type57D ' Anti-Vehicle'
This code contains one white metal battlesuit kit supplied with a Fretan II Rail Gun and an optional Anda Missile Pod for arm and back mounts.

IAF020E Havelock Type57E 'Knightmare'
This code contains one white metal battlesuit kit supplied with a Angis 25mm AP Cannon and an optional Anda Missile Pod for arm and back mounts.


IAF023 Fallen Havelock
Even the 'Big and Tall' has off days and its on one of those days for the Havelock that we present to you the IAF023 Fallen Havelock. Cast in high quality grey tone resin this one piece model is highly detailed and depicts a Havelock Battlesuit destroyed in combat. Against the Marcher Barons or the Khanate Empire who knows either way it lays upon its back, cockpit smashed and arm severed amid the torn metal and displaced soil of the battlefield. Useful as a casualty marker in play or a scenic objective in its own right this great model is about 40mm across at its widest point.

Suitable for use in any science fiction setting as well as The Ion Age. As always this code can be bought as a pack or as a single or select the three packs and save 10% option on the page. 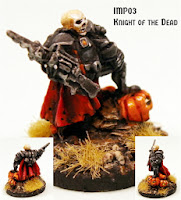 Information Burst!
At the end of the two week early support offer on the Havelock Battlesuit we have reached its release day. All order are being dispatched today across the world and we expect package delivery in a couple of days to a week plus depending on where you are. Thanks everyone! Those who are keen figure painters should look to our blog for the first Croes Nest article on painting Prydian Army Retained Assaulters is there. We are are the half way point of the month for IMP03 Knight of the Dead and its proving a good talking point with many asking us what the Knight actually is and if he is part of the Ion Age background. Remember when you place an order with us you will be prompted to join the loyalty scheme which will earn you Reward Points on all purchases which can, once accumulated, be redeemed for discounts and special miniatures.

May 2019 and The Ion Age has been taken back into Alternative Armies.  It continues with new releases into the future!  Go to Alternative Armies for Ion Age pages of the 15mm Range the 15mm Terrain Range the 28mm Range the Publications range and the Free Downloads collection too for the latest.  All links to the ion age site are now defunct sorry!  If you wish to see something or ask a question email me on sales@alternative-armies.com.  GBS
Posted by Gavin Syme (GBS) at 10:03