As announced on the 1st of August 2017 we are entering the leading edge of the second phase for The Ion Age and my own contribution to this will be the forth book for Patrol Angis.  If you missed this important article you can read it on our BLOG.  The forth title will be a setting book which will be of interest not only to players of Patrol Angis but also any of the other Ion Age game systems past, present and future.  It will be called 'Baron' and it is the story of the Prydian Civil War. 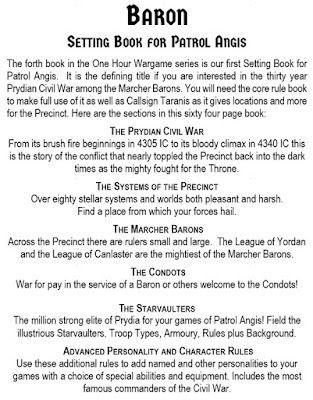 As you can see there will be a lot packed into the sixty four pages of Baron.  The tale of the more than thirty years of the Civil War from the death of King Cyon at Fenway Prime to the climatic defeat of the League of Yordan led by Reckhart Nevall at Lundwick III.  The star systems of the Precinct will give you details and events for all of the important places during the Civil War as well as their uniforms, tactics and more.  Marcher Barons are the powerful leaders and lords of the systems and this book will explain the League of Canlaster, the League of Yordan as well as other baronial forces large and small. Condots are knights and muster who sell their swords to the highest bidder and you will learn about the infamous among them such as the Quarrel Company of the legendary Diodine Sparrow.

There are also two sections of the Baron book which will bring new rules and statistics along with troops and characters to Patrol Angis.  These are the introduction of the illustrious Starvaulters...yes...the golden haired rock gods of space opera...million strong and the best warriors in the Precinct.  A full account of their armour, weapons, troop types, vehicles as well as lance organisation and the Code Gallant.  Secondly advanced character and personality rules.  These will add right onto the ones found in the core Patrol Angis book with points costs and will give more customisation of your miniatures.  There will also be some of the most important characters along with their rules in play such as Edmund Bluefort, Reckhart Nevall, Diodine Sparrow, Marcus Flame and Thomas de Lancey.

(Above is the only current 15mm Starvaulter and it is a one off sculpt..for now.
You can find it in the Year One Collection)

The creation of this book is currently under way among my work upon Flintloque and upon Valon, upon Darkhelm and other projects too.  I am aiming for publication later this year and hope to get Sam Croes to create another epic piece of cover art for the book too.  But before that I would like to point you towards the Alternative Armies Tabletop Gaming Group which is where I hang out on Facebook answering questions and talking gaming.  I am putting a thread up asking for input on Baron such as which new skills, abilities, objects and more you would like to see in the advanced rules.  There are dozens of players of Patrol Angis in the group and all who chip in with suggestions on the thread will get a credit in the book.  If you are not a member then please do apply to join and I will let you in. It is a lovely small group and very friendly.

If you want to email me direct then do so with your input to info@theionage.com or comment on the blog post.