Four years ago The Ion  Age began anew with its website, its rewards programme and its 15mm pledge to action along with a vision for the space opera future and a free miniature in every single package going out the door.  In that first month we gave away IMP01 Retained Knight Kneeling in Cloak free with every order.  In the four years since until August 2017 we have created forty eight free monthly unique 15mm miniatures and many thousands of them have gone out across the world.  We now present to you the last free monthly miniature; IMP48  A special lady indeed as she featured as our introductory artwork for The Ion Age back in 2013.   Yes the last one. IMP48 Baroness Julanne of Canlaster is free in every order this month.  Read on for details of this month and where we are now heading with the completion of Year Four this month and the end of the monthly programme.

Free in every order every time all month. This miniature is automatically put into every order at the rate of one per order regardless of order value. It can also be bought in any amount on the monthly IMP page of the website for this month only too before being withdrawn on the first of September. You can see the Year Three Collection on the website.  The Year Four Collection will be released later in August and will mark the end of the monthly free programme at that time; there will be no more monthly miniatures after IMP48. 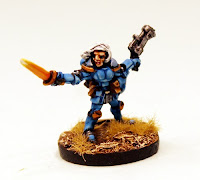 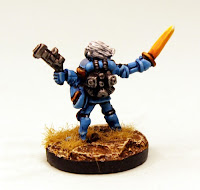 Standing 17mm tall Baroness Julanne is a great female character in personalised Alwite Powered Armour with an Octa Sword who can lead your Marcher Baron forces or be part of the Prydian Army.  She is the female figure head for our website and when we began and now she is a miniature! There is a complete page on the Ion Age website where all of the forty right IMP series free miniatures are shown so that you can see what came before.  They all feature in the Year Collections (1,2,3 and soon 4 and the total set too) if you wish to get any you missed. This miniature is worth 0.60GBP. Later this month we will release the Year Four Collection and the full IMP Collection of all 48 miniatures.

The end of the IMP monthly free miniature.
So I guess many of you will be wondering why we have chosen to end the free miniature project with the forty eighth miniature.  When I began this new Ion Age I was not sure it would succeed and in fact some even told me not to go for it  But it has grown and evolved and I am very proud to have achieved the first stage of my vision for The Ion Age in just under four years on my own terms.  It was my intent to get a game system created and to populate it with 15mm miniatures building upon a small starting block.  Patrol Angis along with Callsign Taranis and The Khanate Return achieved this and every miniature ever spoken about in The Ion Age originally now exists in 15mm scale both Human and Khanate.  Four years and forty eight free miniatures it is time to stop and re-focus efforts to the second stage of the vision.  We have so many ideas we want to get into metal and resin and there have been many changes in four years too.  As you will know 15mmcouk merged back into Alternative Armies and The Ion Age is linked to that.  As a total company we are busier than ever and this has altered our focus.  I have kept the Rewards Programme just as it is.  The programme has some five million points accrued with in it and a thousand rewards claimed. We will continue to do promotional and special miniatures with the seasons and for chuckles too.  With this turn of focus and other ideas to pursue it was time to end IMP.

I do not want to leave you here without giving you some hint of what will begin our next phase at The Ion Age.  From September 2017 we will be expanding upon the design work and books which your faith in us has allowed us to do so far.  Wider ground and what else is within and without the Prydian Precinct will see a new book and a lot of new miniature and other releases of a scope not yet experienced.  Read on. 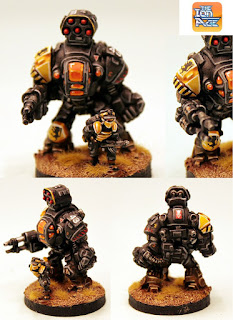 The forth book in the Patrol Angis series will concern itself with the Marcher Barons, the Civil War and the conflicts among the stellar systems of the Precinct as well as details of those systems there will be a new faction long awaited...The Starvaulters!  New skills, abilities and equipment as well as characters like Diodine Sparrow of the Quarrel Company.  A definitive setting for war between knights and muster as Prydia Burns!  More of this as we near it and yes there will be a full range of miniatures for the Starvaulters the million strong elite of our space opera future.  That is the new project in The Ion Age for me in the form of book four. 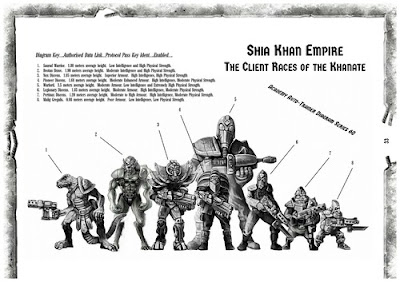 Miniatures are what it is all about and 15mm goodness shall come forth in a massive expansion of the Shia Khan Empire and the Planetary Militia all from the hands of Sam Croes.  An expansion on a order of magnitude not yet seen from us and much larger than most Kickstarter campaigns too.  We will be adding every single one of the client races detailed in The Khanate Return at full Ordos (platoon) level which means around one hundred and sixty new 15mm Khanate from the Pertinax and Saurod to the Beotans and Betrayers as well as portable weapons crews for each of them.  Infantry Size Vehicles for each of these client races too!  As well as this nearly sixty new Planetary Militia with Cold Climes and Hot Climes as well as Infantry Sized Vehicles for them too. Lastly the Starvaulters at a full force too including their unique Infantry Sized Vehicles.  All in all this means in total more than 250 brand new 15mm miniatures from us from September on! That is the first goal for the second phase of the vision for The Ion Age. 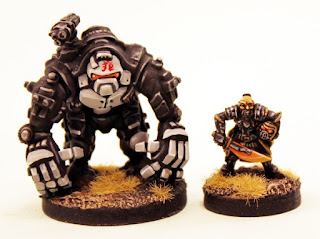 During August we will have new vehicle releases and we will be taking part in an event with Alternative Armies plus we will be releasing the Year Four Collection of twelve miniatures and the total collection IMP of forty eight miniatures.  Our month long offer is 20% off the fantastic Jade Ape Battlesuit which is now a resin and white metal kit.  Go HERE for these with offer ending 1st September.

I hope you have enjoyed this article and that you like the last monthly free miniature.  Ain't she a beauty! Feel free to ask any questions you might have on our blog or by email to info@theionage.com.