Before we begin in earnest with the awesome I want to tell you all about this festive season for us. As you might know The Ion Age is one part of a bigger family that also includes the mighty www.alternative-armies.com and the hugely popular www.15mm.co.uk. Its been a busy year for us; increasingly so.  In fact we have all been working six or even six and a half days a week since the late summer and now we have taken on more staff too.  We have experienced a surge in demand for everything that we make from miniatures in 15mm scale to miniatures in 28mm scale as well as resin vehicles and terrain, pro-painted miniatures and armies and also books.  As a result we had been a little behind on shipping out orders (normally we ship our four or five days week).  We are taking a break for a few days for Christmas and the seasonal closure of the freight companies and the post office but deliveries will commence once more as soon as things return to normal.  Let me take this chance to thank you all for your support this year and always.  2015 is going to be an epic year and for us at The Ion Age we want to commence with rounding up this annum and a pat on the back...read on.

What a Year 2014 Has Been....
We took a few hours off from the constant work that has been our duty for this month and decided to take a series of photographs of our display scenery set up with virtually every code in our 15mm scale range.  Why?  Well We wanted to show you compared to this time last year, here is the link to the Round Up 2013 posting on our blog, how much we had grown and in how many directions.  To that end each of these photos has a caption telling you what it is showing.  The display itself is some three and a half feet wide and we filled it!

In 2014 we have released another twelve monthly free miniatures in the IMP series, we have expanded from some ninety miniatures to over one hundred and fifty.  From a few Battlesuits and Bikes we now have over a dozen vehicles from the small to the medium including the Adder series and the Mullo as well as the Skylark.  We had our Hab Dome but now we have some twenty different pieces of terrain which are able to create a whole Hab Complex.  We have met our expansion goal for 2014 for the Prydian Army.

The next year will bring lots more and in several directions of releases too.  It is our plan to finish the creation of all of the original 28mm Ion Age miniatures into 15mm scale with the Planetary Militia.  This will be a force with its own infantry, its own battlesuits and vehicles suitable not only for our own space opera setting but also near future as it represents the defence forces of a planet rather than galaxy fairing knights.  With that achieved we will enter my own goal for the next year which is to take The Ion Age in new directions with miniatures with two new factions entering the fray that are totally new.  Each will have its own infantry, vehicles and so on.  I can confirm here that the first faction will be far future Chinese style Zin who are traders and explorers.  Concept art exists now for this range and its looking really fine with unique ideas and style.  Jade Ape Battlesuits anyone?  The second faction is not yet finalised but it will not be Human and will be a foil for not only the Prydian Army but also the Khanate Empire too.  The first look and news at the Planetary Militia is in early January.

The awesome nature of the miniatures is down to our team of designers led by Sam Croes but my own commitment to The Ion Age has been in the realms of fiction and communication and in one aspect of this...I failed.  Why you ask?  Well the answer is Patrol Angis.  I had hoped to get the first book out already but that has not happened so I estimate first quarter 2015 for it. Patrol Angis is a skirmish focused rules set for one platoon or so a side so it can be played in less than an hour.  It can go bigger though and the play testing was carried out by more than twenty hard core 15mm science fiction wargamers over six weeks.  Its a 15mm scale game and its initial book release will focus on infantry actions with Battlesuit and Portable Weapon support during the Prydian Civil War.  That is the Prydian Army against Marcher Barons so you can use all of the core Prydian Army miniatures with it.  About twenty miniatures a side and we will be selling complete platoon or lance packs each with a unique miniature in it.  Its focus is what happens when one recon force encounters another in open ground.  Its a starting place and it mattered to me that my own sons could play it with not much study.  Its low intensity and easy to get into.  I want a game system that has not only great and fun rules (which they are, they work really well) but also a damn good read too with a compelling back story and that takes time to do.  We have just been too busy.

We had such an epic response to the Habitation Colony range back in November that it out shone the original Hab Dome that kicked it off.  Its our plan to move into buildings and such that would be 'small town' as well as our existing outpost or moon base type items.  All of this year we have been training up and ramping up our resin production plant and we plan to create more medium and perhaps even heavy vehicles in 2015.  Perhaps even things on legs not tracks; you will have to wait and see.  If anyone wants to keep up with what we are doing on a week by week basis with The Ion Age I recommend sticking with this blog as it is where the gossip and news is.

I am confident that when we look back to this posting in a year the change will be even greater than in the last twelve months.  Thank you all for your support, for your faith in us and for wanting a wargaming style and setting that is more than the usual thing.  We will not let you down!

Festive Season Offers during December 2014
We are taking a few weeks off making new releases (one per week for a year is very impressive I am sure you will agree) but we have a few offers for you too that will last until the end of the month while IMP16 Chrimbot is the free miniature in every order automatically.  Here are the details, prices already changed on the website no code needed, and remember there are no more releases until January:

All of these offers are on our Early Supporter Page.  Treat yourself during your December order with us until months end.

Information Burst
Beep Beep!  I am a robot.  Well not really but it seems you all dig our festive fellow the current monthly free miniature IMP16 Crimbo Bot sculpted by Sam Croes.  Lovely is it not.  Makes you want to destroy all Humans. You can also buy it on its own too during this month.  Removed on 1st January 2015 there is one free automatically in every order placed with us.  There is no other news just now apart from the work we are doing on the upcoming Planetary Militia range.  This is the last part of our Prydian Army structure before we bring in the new factions in 2015 and its nearly ready.  There will be a detailed post about this on our blog in the new year but as a wee reward for reading this far I will tell you that there will be several new vehicles and a battlesuit the primary vehicle being a six wheeled APC called the Colobreta.  Its near future but its got a hint of off world and colony to it as well; perhaps even the most mega of cities as well. Here is a wee picture to enjoy for the moment. 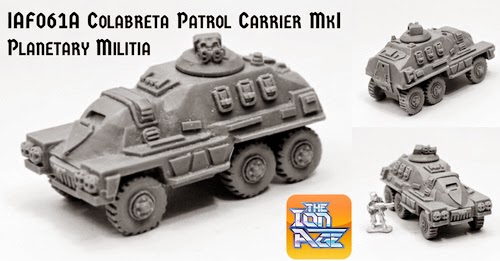 Finally remember that by placing an order with us you will sign up for an account with the website and that means you get Reward Points in all purchases (plus the monthly free miniature).  These points can be used any time to get free products and discounts on orders.

So as we say here in Scotland “Hae yersel a merry Christmas an a guid new Year”!!!
See you all 2015!