Castellan Taranis APC from the collection of Sam Croes 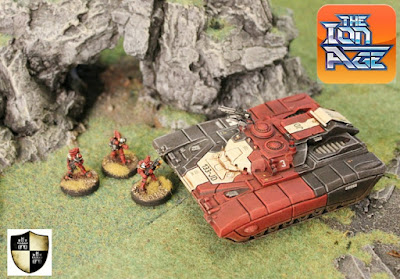 “My fellow nobles I put it to you that among our allies there are few kinder than Baroness Maud who gave her knights and their blood to throw back the Canlastrians.  We owe her a debt and this we can pay by the supply of that most mighty of war machines.  Castella needs Taranis Tanks and we will make sure they have them!”
Princess Cyon, New Glastonbury Tor to the Adden Council, 4330IC

Sam Croes is the lead designer of The Ion Age and he is a very talented artist and figure painter as well as sculptor and to that end we wanted to share with you an item for his collection that he was kind enough to let me photograph. This is Sam Croes own IAF100E Taranis Tracked APC painted up in the colours of his own Marcher Baron force; Castella.

Castella is a small one star system Barony allied loosely to Prydia and an enemy of both Canlaster and Yordan.  There is one inhabitable planet in the system ruled over by the great aged Baroness Maud who takes to the field in a suit of highly customised Desteria powered armour.  Castellan knights are well trained and have seen action in many campaigns and recently a fabricators right was given to Castella to make its own battlesuits and indeed even smaller vehicles on Prydian patterns.  An agreement was struck with New Glastonbury for the delivery of several thousand Taranis main battle tanks mainly of the tracked variants.   You will see more of Castella in the future as it is the force that Sam intends to make his own in our own wargaming. 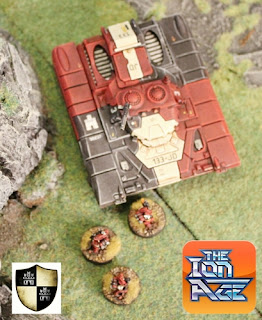 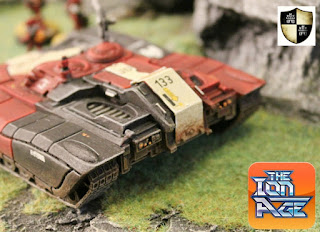 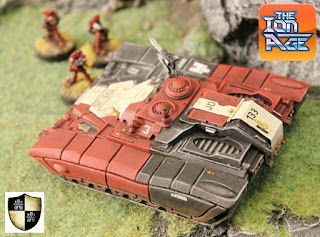 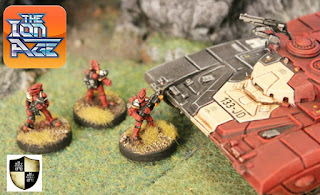 You can see that Castella favours a black and red uniform that is rather distinctive when compared to the other Prydian Army and Leagues colour schemes.  In the pictures the APC is detailed with these colours and a small number of Castellan Retained Knights too.  Its a fairly easy colour scheme to make use of.  As a treat here is the pauldron motto and seal of Castella as an image so that you can get a good look at it. 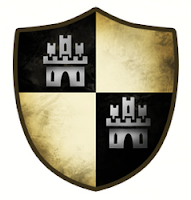 If you are interested in the miniatures shown here they are: 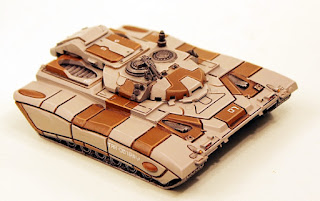