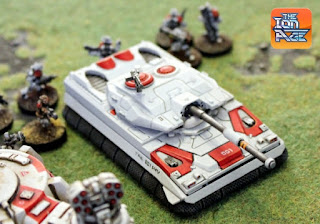 With what we know now the loss of the Brightening Star should not have happened but then we were only beginning once more to face an enemy that our long dead forefathers had through banished forever.  The Fleet did not arrive in Camarthen space for many months after the loss of the Belkus Labyrinth.  It took time to gather the knights and their musters while thinking always of the threat posed by the Marcher Barons.  But we did not stand idle.  Perhaps we should have though.  Lectus Bowar led his retinue of a hundred Starvaulters and fifty thousand troops of Prydia on a rapid strike again the then fledgling Khanate presence.  The Brightening Star was one of forty Cassillis class Portable Castles that landed in the vicinity of the by then ruins of Pelcan city.   She was not the only one lost but she was prime in the failure of the containment campaign and her fate sealed that of Bowars small force.

The few survivors of Bower's task force that were still conducting hit and run operations when the Fleet arrived in system tell of the Brightening Star being taken by surprise by elements of the Styx Legion.   Several Tesserans of Canthus pattern monocycles powered straight up the Star's foremost sallying ramp and into her belly soon after landing.  Most were obliterated by Angis fire but one must have reached the fore Hurwent generator and detonated against it.  Cowardly but it worked.  The Brightening Star became her very name for an instant as the generator went critical.  Only those outside scouting survived the blast.  Bowar vanished along with his flagship and it set the campaign back badly.

Those Retained and their vehicles that had already disembarked under fire from the Brightening Star were of the 407th Regiment of Prydia.  A regiment whose main distinction at that time, it has subsequently out of necessity been reformed from ashes, was its insistence upon its Alwite armour pattern colours being replicated upon all of its vehicles too.  This was and still is very rare for the Prydian Army as vehicle commanders adhere to a different interpretation of the Code Gallant and thus do not use the white and red as troops on foot do.  All of the Adders, Mullos, Skylarks and of course Taranis of the 407th were a brilliant white with red paldron detailing.  According to a survivor of the 407th the last heavy asset that the regiment had after the loss of the Brightening Star to Khanate action was a single Taranis Model 9 Lifter Type A  mounting a Bodkin AP 130mm Cannon.  The tank had suffered damage to its GroatVey MkX HeavyIon Reasc Fusion Reactor meaning its mobility was nearly zero and it made a heroic last stand fifteen miles from the blast crater left by the Brightening Star alongside two lances of knights and the last members of a trader crew who had fled Pelcan City when the Khanate appeared.  The survivor claims that this last stand against a full twenty Tesserans with armoured support from the Styx Legion lasted only minutes but the last to fall was the single brilliant white Taranis tank that used its last Phelot Ex22 AP round to destroy a Pugnus tank mounting a Banshee class Atomic Destabiliser as its armour slagged away from the enemies fire.

With the massive ecological and geographical change and destruction that Camarthen Prime has undergone it is impossible now to find any trace of this last stand or indeed the craters left by the Cassillis portable castles of the task force.  But we choose to believe it occurred.  We will emulate the bravery of Lectus Bower and of the 407th Regiment.
Knight General Obermann.  Fleet Command.  4331IC 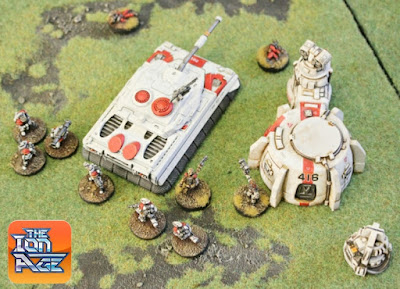 Following up on last week's article all about Sam Croes own Barony of Castella and his Taranis Tracked APC I was asked if I we had another version of Taranis that we could share.  I knew that we did and the result is this short article all about the last white Taranis Lifter of the doomed Brightening Star.  While we are still some way off seeing the campaign for Camarthen Prime and the war against the Shia Khan Empire we have been hinting at it since near the inception of this new Ion Age.  The tale above was written during the design process Bob Naismith undertook to create the Lifter (Hover) variants of the Taranis Tanks that we have.  You can learn about the IAF102 models HERE on our blog. 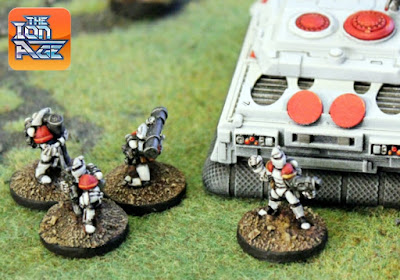 The Taranis Model 9 Type A does look radically different painted in brilliant white with red details.  Not an easy colour scheme to do by any means but I wanted to try it out to see what the heroic last stand from the story extract would look like.  I have to say that it looks superb but its not the colour scheme I have chosen for my own Condot force that I am slowly building up (I am very taken with the Quarrel Company, the mercenary Condots led by the infamous Diodine Sparrow) and while the white and red suits infantry brilliantly for our space opera setting its not the natural shade for the mighty Taranis.  At least not to me.

You can see around the doomed Taranis in the pictures a Hab Dome with attached Anda Missile Pod mount turret as well as a few Retained Knights (taken from code IAF008) who are racing to set up their Anvil 888 Launchers before more alien legionaries arrive.  Those who are eagle eyed will also spot the two legionary casualties...something for 2016 there. 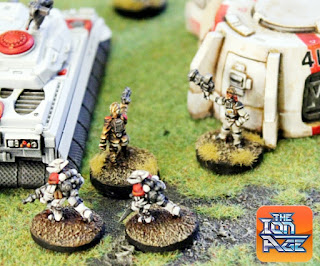 Back when I created the story that you have read above the trader crew were there but we had no miniatures for them but when it came to taking these pictures now I was lucky enough to be able to use the brand new IAF104 Precinct Adventurers miniatures released this month sculpted by Dave Foley.  You can learn more about them HERE.  The scene was set up with no reference to Patrol Angis or the draft of rules for its vehicle and structure expansion Callsign Taranis which is being worked on now but it looks superb I think.  Like a snap shot of a moment just before the bullets and beams begin to fly.

I hope you have enjoyed my little tale about the last brilliant white Taranis and its fate.