IAF082 Taranis Repulsar Drones will be free in Taranis ESO's!

We previously released IAF081 Taranis Running Drones and you can see these HERE.  In December we will be releasing a follow up pack of drones designed by Bob Naismith and these are to be IAF082 Taranis Repulsar (Anti Gravity) Drones.  These will be released as pack but first they will feature in the December ESO's on the IAF103 Taranis Repulsar Tanks as a FREE PACK of five (worth 5.00GBP) with every tank pre-ordered. Superb value and excellent with ant-gravity tanks.  After that they will be released as a normal code as a pack of five, choice of singles or buy three packs and save 10% as part of The Ion Age 15mm range.  This article gives you the first proper look at the drones all painted up and finished and ain't they just lovely!

There are five different drones all supplied in two white metal parts with a repulsar lower body and a different upper body which sits naturally into a bowl mount at the waist allowing upper body posing.  Each drone has a different function in the protection and repair of a Taranis tank. From left to right these are as follows: 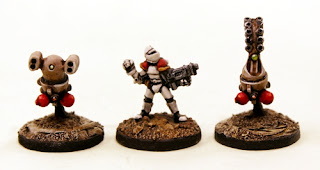 Above is a scale photo showing a Retained Knight from IAF008 Retained Post Charlie.  A typical Human miniature it is 17mm tall and shows the Missile Pod Drone and Particle Dispersal Drone on either side.  The Drones assembled stand between typically 15mm tall and 22mm tall for the tallest. This scales them perfectly in 15mm and also makes them waist height for a 28mm miniature too. Scale variable.

So.  The Early Supporter Offers will give you a pack of five worth 5.00GBP free with every IAF103 Taranis Tank you pre-order purchase.  After all every main battle tank needs a little love!