It is well known to the regiments of the Prydian Army that while Retained Knights armed with the superb Angis 12.5mm AP Rifle can inflict serious harm upon any opponent there is a limit to their ability to bring down larger targets or suppress areas of a battlefield.  This applies particularly in open ground rather than in intense urban environments and also against battlesuits such as the Havelock and the Duxis types.  Even with Alwite powered armour larger weapons cannot be easily transported and used in hand.  No experienced commander expects his troops to be able to stand against these kinds of threats without appropriate support.  This was known before the outbreak of the Civil War and the solution to providing this support to infantry was taken from surviving records from the time of the Ban of Prejudice.  A project to bring the 'Espaten' series of Portable Weapon Platforms into service was begun and was a great success. A success beyond all expectations.

Beginning in earnest in 4320IC with forty newly fabricated Espaten being fielded during an activation crisis in the Gurtan system these portable weapons mounted a Moth 88 automatic two barrel cannon and performed excellently against the rampant droids.  With an ability to mount a support weapon in the same power scale as a battlesuit and be controlled by a team of two gunners Espaten's could be deployed at the Platoon or Lance level easily.  A far lower fabrication cost has also contributed to the rapid uptake of portable weapons as a regimental staple.   Portable Weapons are just that.  With a lot of fire power and easy to move from threat to threat they work well with troopers who cannot expect vehicle protection.

There are Espaten Portable Weapon platforms in service throughout the Prydian Army and also with the Marcher Barons in alliance with the League of Yordan and the League of Canlaster as well as with mercenaries and also some wealthier civilian organisations.  They come in many forms and are often adapted to suit planetary conditions or the challenges of certain enemies.  Weapon systems favoured by Espatans are variants of those used by the Havelock Battlesuit and include the following.  The Moth Type 88 rotary cannon, the Angis 25mm AP Cannon, the Fretan II Rail Gun, the Valerin 15MW Laser Cannon and the Bodkin Howitzer all used for fire support both short and longer ranged.  There is one notable exception and that is the Moth 88 twin long barrelled cannon variant which is primarily used against enemy air vehicles such as Skylarks but can be used against ground targets also.   The weapon platform itself is static on four titanium alloy struts with an integral titanium gun shield and it can be equipped with two kinds of motive systems.  Used by the Muster is the type 38 quad tracked Espaten Motive System which can keep pace with most infantry and used by the Retained is the MkXI Repuslar Motive System which holds the portable weapon just above ground level in a steady hover.

Espaten Portable Weapons have gone from a relic of a bygone age to a core part of campaigning all across the Prydian Precinct.  They have earned their nicknames 'the spitters of death' on dozens of worlds. 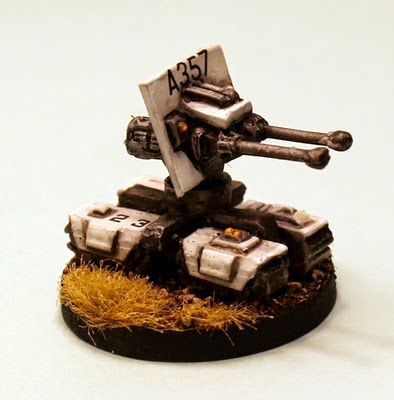 On October 23rd we at The Ion Age will be releasing the range of Espaten Portable Weapons along with two packs of gunner crew for them.  This Sneak Peek is an overview of just what you can expect from these white metal 15mm scale models.  It is also in place of a weekly release from us and instead of our typical monthly Early Supporter Offer which would have begun at this time.  What's more we will be having a release offer on all of these codes for a week after release saving you 15% off the regular prices.  What could be more awesome than that eh!

The core pieces are the four legged stand, the housing block and the gun shield.  These are the same in all variants and onto this is mounted one weapon.  The options here are Moth 88 twin long barreled cannon (A), Moth 88 rotary cannon (B), Angis AP Cannon (C), Bodkin Howizter (D), Valerin Laser Cannon (E) and the Fretan Rail Gun (F).  Weapons mount one of two ways with the gun shield fitted over them or around them.  Here is an image of all the variants assembled and painted up in Prydian Army colours.  Lovely! 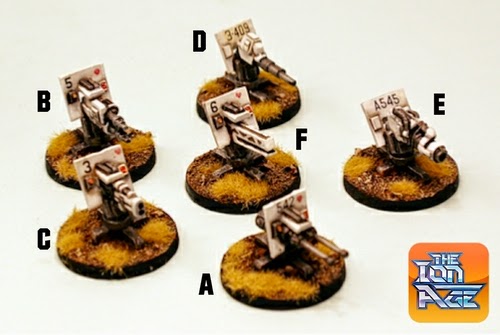 You can get an idea of the size of the finished portable weapon by noting that each of them is standing on a 30mm round base (their basing size for Patrol Angis) and again they are labelled with the letter corresponding to their variant weapon.  Each pack will contain one portable weapon kit and you can choose your variant on the website. As always these variant codes can be bought as a pack or select the three packs and save 10% option on the page. Price per pack 2.00GBP

Moving on Up!
While it is perfectly fitting to have your Espaten Portable Weapons static on the battlefield giving fire support or acting in a defensive and dug in formation you might want some pace to them and a way to get them around during the heat of battle.  To that end we are also releasing two packs of motive systems suitable for all variants of the IAF046 portable weapon.  For use by the Muster or other lower technology forces there is the IAF065 Espaten Tracked Propulsion Units and for the Retained or other higher technology forces there is IAF066 Espaten Anti-Gravity Propulsion Units.  Here are images of the two. 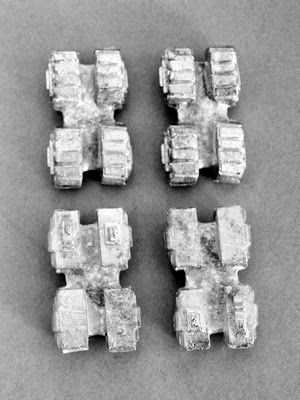 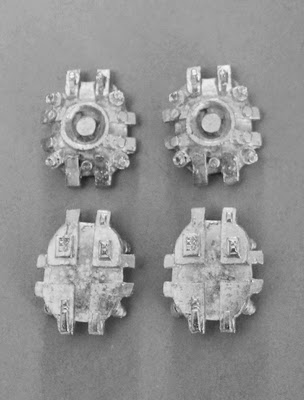 We are placing four identical units in every pack with a price per pack of 5.00GBP.  These propulsion units give your portable weapons the ability to be truly portable and they just ooze space opera.  Below are two all angle images of an IAF046A Moth 88 twin long barrelled Espaten fitted to the tracked and also the anti-gravity propulsion units.  Combining up the two gives more meaning and more durability to your collection. As always this code can be bought as a pack or as singles or select the three packs and save 10% option on the page. 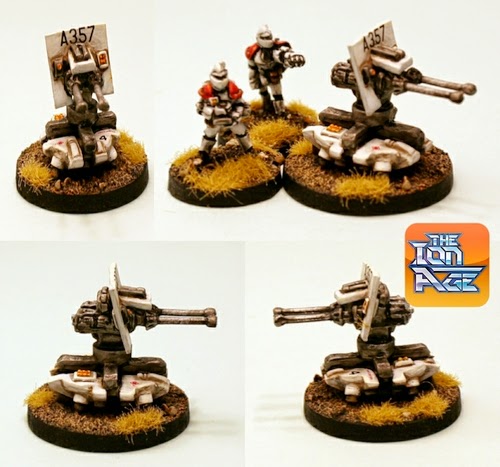 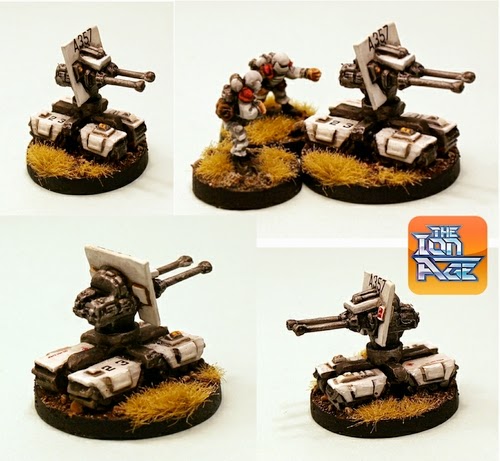 Gunners for the Guns!
We will be releasing two new codes of Espaten Gunners as well as the weapons themselves.  One of Muster Troopers and one of Retained Knights meaning your can place Espaten Portable Weapons into your Platoons or Lances in the upcoming Patrol Angis (where a portable weapon has two crew) or any other space opera wargame system you prefer.  These are codes.

IAF055 Retained Espaten Crew
This pack contains two 15mm scale white metal miniatures in different poses.  Two Retained Knights in Alwite Powered Armour with the first holding the remote control interface for a portable weapon and the second with arm raised checking ranges.  As always this code can be bought as a pack or as single miniatures or select the three packs and save 10% option on the page. Price 1.00GBP per pack.

IAF056 Muster Espaten Crew
This pack contains two 15mm scale white metal miniatures in different poses.  Two Muster Troopers in Aketon armour with the first holding the remote control interface for a portable weapon and the second with arm raised checking ranges.  As always this code can be bought as a pack or as single miniatures or select the three packs and save 10% option on the page. Price 1.00GBP per pack.

So there you have it.  Next week all of these codes will go online with a one week offer placed on their new release of 15% off the regular prices and of course you will get the current IMP14 Female Retained Knight monthly miniature FREE in all orders as well.

We do hope you liked this sneak peek and that you also like our portable weapons too.  All of us here at The Ion Age spent a lot of time thinking over the concepts and ideas for the Espaten and I personally feel that its come out excellently.  All comments are welcome and suggestions for additional variants too if you wish to tell us by email or comments.