One of the innovations that the very beginning of the Prydian Army made in the year before the battle of Fenway Prime was to bring back ancient military designs that had been brought to the Precinct by those first long forgotten Humans fleeing the anarchy of the species home world. While the powered armour and energised weapons were inventions from the Ban of Prejudice a thousand years earlier the patterns for what would become the Havelock and Duxis battlesuits were taken from this ancient knowledge. The Prydian Army had no ground transport for its Muster. Ground transport that could bring the soldiers to the battle but also support them while they were in combat. The answer came from this same source and became the Adder Combat Car series.

In the Resource Wars of the 21st Century before the time of the Ark Ships and mankind taking to the stars a similar style of warfare combined with a lack of raw material existed. The solution of the time for the bulk of infantry was the Combat Car. Easy to produce, easy to maintain and made from simple parts and well tested technology they were cheaper than any other vehicle of the time overall. They could carry a four man fire-team or they could act in a support role with mounted weapons in the same range as those used by crewed weapons or battlesuits. A modular hull meant that often only the turret and some internal systems had to be changed over to create a new model in the series. Fitting new power systems and drives and moving away from the fossil fuels of the twenty first century meant that Reckart Nevall and the weakened Aeddan Council on the New Glastonbury Tor now had the Adder.

Adder Combat Cars come in many types within the series including newer different drive systems but the bulk of them are four wheeled. With an average weight of just over five and a half tons and roughly sixteen feet in length that Adder is not a combat heavy weight like the Taranis. A colour coding system is in use to make Adders easy to assign to Regiments (and indeed the Marcher Barons use the same system) and to allow Muster who can sometimes not be as used to war as a Retained Knight a simple recognition method. The Red Adder is the standard Combat Car with space for four and mounting a turret with a Moth 88 Rotary Cannon. The Yellow Adder is the fire support car and has two crew along with a turret with an Anda 60mm Missile Pod. The Black Adder acts as an armoured punch giving the Muster the ability to knock out battlesuits and other smaller tough targets with two crew and a turret mounted Fretan Rail Gun. Less common is the Orange Adder which is infantry support mounting a specialised turret with a Moth 30 automatic 50mm Grenade Launcher which is a recent introduction to the series. Dedicated Adders include the Green Adder which is a command and control car at the battalion level and the White Adder for medical teams and battlefield triage. The 'Battle Taxi' type Grey Adder is heavily modified and can carry two fire-teams or a squad at a real squeeze. There are also some very specialised Adders too for purposes such as Blue Adder, the Brown Adder and the Purple Adder. Every Muster Regiment is in possession of hundreds of Adders across the spectrum for all its roles and since they are so easy to fabricate and to maintain they are making a real impact in the ongoing Civil War and in the Camarthen Star System too.
---

What a lark we had last time with our Early Supporter Offers we have decided to do it again this month and this time its our first wheeled ground vehicle; the Adder series Combat Cars. Our first wheeled ground vehicles which we sneak peeked at last week. We have a bundle offer for you on the Adder the standard light combat car used by the Muster in the Ion Age. Adders come in coloured variants and this bundle concerns the Red, Yellow, Orange and Black Adders. Here are the details of the bundle which runs from 5th June to 19th June.

In the bundle you get all the parts needed to make Five Adders. Composing of five Adder bodies, one Yellow Adder Missile Pod Turret, one Moth Launcher Turret (Orange Adder) and three standard turrets along with six weapon choices for them (six Red Adder chain guns and six Black adder rail guns) meaning you can make one Orange Adder, one Yellow Adder and your choice of three Red Adders or three Black Adders or a mix of the two with spare weapons left over for other uses. Also the terrain piece or marker for a destroyed vehicle the Smashed Adder. Excellent value and a whole platoon of light vehicles for use in our own or just about any 15mm science fiction wargame from the present day to near future and space opera too. Here are the codes contained in the bundle which will be on general release from the 19th June 2014 at normal retail price:

An Adder kit once assembled is approx 45mm long, 35mm wide and about 25mm tall. All Adders are supplied with a one piece hull including wheels and with a separate turret with integrated weapon all in resin or a separate white metal weapon to add to the turret. Typically only two or three pieces which are very easy to assemble. The Smashed Adder is approx 60mm wide and 35mm tall in one piece of resin. It can be used in your games as a terrain marker, a scenario objective or a casualty of an Adder in play.

The Adder Combat Cars and their supporting codes along with all of the 15mm white metal Muster miniatures are all working towards the release of Patrol Angis our 15mm skirmish science fiction rules system. In the vehicles expansion of the game the Adder will join the Skylark in performing duties such as combat support, troop transport, precision armour killer and general artillery call downs with more to come later. Here is a picture of all the Adder Combat Car variants on a typical road surface: 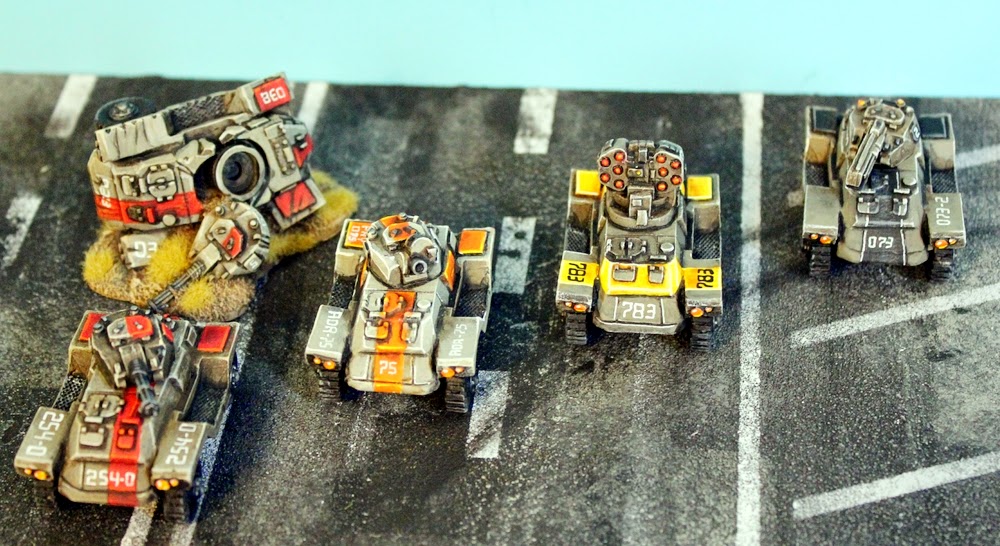 Here are the scale shots with our 15mm miniatures from the sneak peek last week: 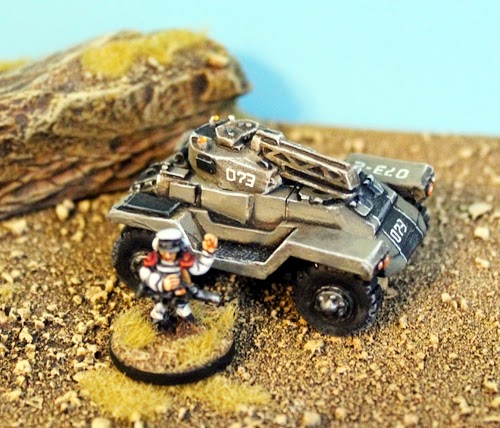 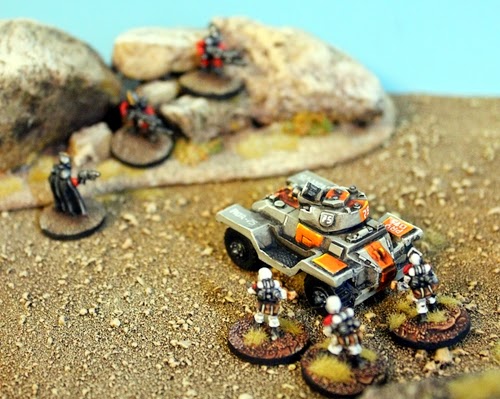 We think that the Adder Combat Cars are great light vehicles and we hope that you do too. Excellent Value and very useful. Thank you for your support of all of us here at The Ion Age in allowing us to pursue our dream of a space opera future that is wholly its own.