From the era of the Ban of Prejudice and before that the long vanished Resource Wars it is my delight to present a historical document for use with Patrol Angis.  A Khanate terror machine used in ancient times which has appeared once more in the Second Khanate War in 4330 IC.  Written by Aris Kolehmainen this article gives introduction and rules for the Metaborg which you can get HERE on the website and stands 60mm tall (HOF16 and HOF17).  Pictured with the 15mm scale Psycoborg to the left and a Warlord to the right and in front 15mm scale Legionary and Pioneer (16mm tall) from the author's own Medusa Legion.  Enjoy!  GBS 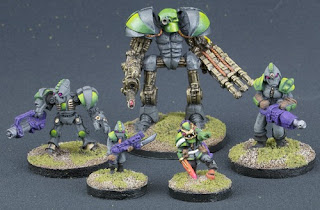 With the honor and glory of the spearhead of the invasion having been granted to the Styx Legion, other legions were charged with establishing a forward base in the ruins of Camarthen IV. It would be the Medusa Legion that first discovered the long hibernating Metaborg Proauctors, having been charged to seek out any resources that might still be useful to the Shia Khan. Pertinax crews got to work, quickly waking the ancient AIs form their millennial slumber to reestablish themselves to their role as lords of death and terror on the battlefield. While many of these AI had become corrupted or had simply ceased to function, many were able to be awoken and distributed among the Legions by the time of the Prydian counter attack.

The Proauctors proved to be more fragile than their current counterparts, however, they made up for that fragility with long forgotten experimental technology known as “Drivers”. Drivers are, at their most base level, AI enhancers. They allow the Metaborg to make tactical decisions much faster and more efficiently than even the current Metaborg variants, however, these come with frustrating drawbacks. On the battlefield, Perfects often complain that the Proactors will move out of position or overload their weapons when they are not instructed to do so, sometimes resulting in the loss of battlefield assets. Off the field, many whisper about what the enhancements to the AI might have done, especially over such a long period of time.

Rumors have begun amongst the Maligs, that some of their ilk have gone missing when hanging around the repair cradles of the Proauctors. Though laughed at by Legionnaires and Pioneers as the deranged thoughts of weaker minds, they were also apt to notice that the Beotan make a warding gesture in the presence of a Proauctor, and that Pertinax crews never seem to work on one in groups less than three. They, themselves, often find they are walking a little quicker around a resting Proauctor, and the feeling of being watched by its gigantic, eyeless visage isn’t spoken of, but felt by all… 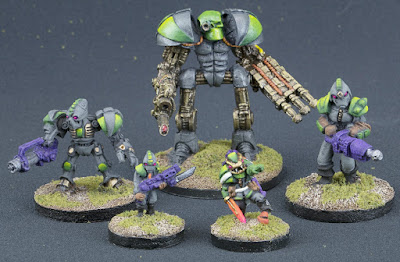 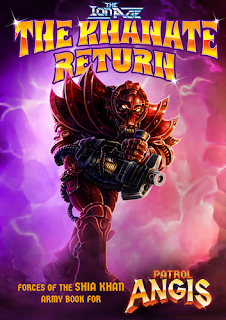 Krakos Mk.I Energy Overkill Driver
The weapons of the Proauctor Dysforia are enhanced by a complex and once experimental power boosting system. When the Dysforia AI finds it appropriate, it can over charge its energy weapons, enabling it to utilize a much more powerful attack. However, these systems were not designed to handle such raw power, and the weapons must spend time in a period of “cool down” to prevent the weapon itself from melting.

When you attack, any roll of 8 grants that hit +4 strength. However, this forces the system to go into “cool down” mode at the end of combat. One activation must be spent to bring the weapon back online before it can fire again.

Note: If both of the weapons are in cool down mode, you need to use one activation for EACH weapon to use it again. You CAN choose to only reactivate one weapon and leave the other shut down if you wish, but you MUST spend an activation to bring it back online.

Telos Mk.I (a) Reaper Collateral Driver
The Proauctor Nekros are enhanced with a special AI driver that reviews target data from three independent drivers before cycling though to the decision cortex of the Nekros AI. The result of this is that the Nekros tends to spread it’s damage much more efficiently, at the cost of sometimes moving itself out of position to ensure the kill.

The Telos Mk.I (a) adds +1 to the Nekros AOE and Impact Gauntlet hits, however sometimes the driver compels the Metaborg out of position to attain a better shot, or to move into close combat. After you declare your intent to fire a weapon, roll a D8. On an 8, the Nekros moves 11cm in a direct line towards the closest enemy unit, (taking into account difficult and impassible terrain as if it had made a regular movement action). If this brings it into base contact with that unit, it is considered to have changed and may initiate close combat as per normal.

Relic of the Past

Metaborg Proauctors are ancient in the extreme, and while expressly deadly, are also prone to failure due to their age and rushed repair.  If a Proauctor takes 6 damage or more in a single round of combat (ranged or close combat), roll a D8. On an 8, there is a critical system failure and the Metaborg goes completely offline. Treat this unit as destroyed.
Posted by Gavin Syme (GBS) at 07:15