We are delighted at The Ion Age to now carry the two packs of Sandworms sculpted by Kieran Billings from Alternative Armies on our website too!  We have a pack of five Sandworms in five different poses and we have a single Greater Sandworm too (VNT codes).  They are resin single piece miniatures and we have an offer on them of 10% off normal price until the end of this month!  Lastly read on for details and for a link to the website plus a free article for playing them in Patrol Angis too.  Go HERE. 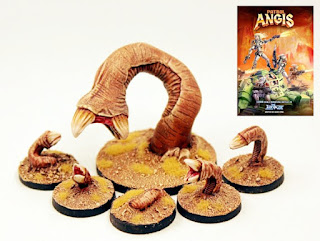 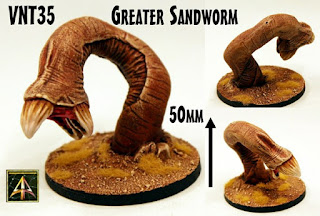 VNT35 Greater Sandworm
Seen in stories and legends across the globe you must be fearful when the soil under your feet shivers at its approach.  The Greater Sandworm. This pack contains a single one piece high quality grey tone resin miniature which is around 50mm tall and works in multiple scales for any game setting. Supplied unpainted and without a base (shown on a 40mm round base) with no assembly required. Go HERE.  4.00GBP 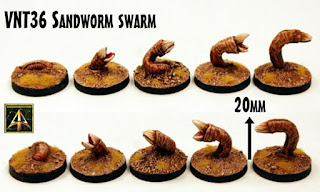 VNT36 Sandworm Swarm
The brood, the young or just the typical these Sandworms hunt prey through the sands and dry river beds seeking by the vibration of footsteps.  This pack contains five different one piece high quality grey tone resin miniatures which are between 5mm and 20mm tall.  They are emerging from the soil and then attacking.  Supplied unpainted and without bases (shown on a 20mm round base) with no assembly required.  Go HERE.  5.00GBP 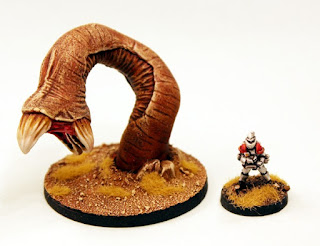 If you are a fan of Patrol Angis you are in for a treat now.  A new official free article for using the Sandworms in your games.  Click on the article to download from our website.  I had great fun writing it.  Enjoy! 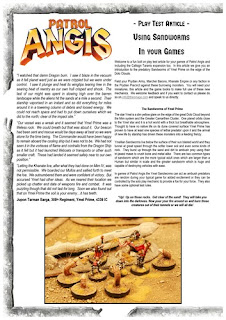 On the edge of the Dolo Clouds beyond the Mim stellar system sits the dim star called Ymel around which circles one hot planet; Ymel Prime.  Chasing a solitary Dragon Ship a small contingent of Prydian Army troops crashes on the planet after successfully shooting down the Khanate enemy. Both sides are now trapped on Ymel Prime in the blazing sun.  A dead world...or is it?  Add Sandworms to Patrol Angis with prey seeking mechanics and random appearances.  Download now HERE. 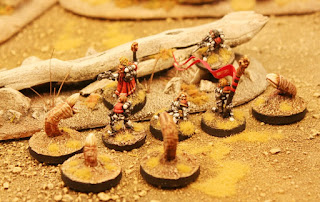 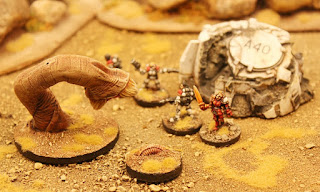 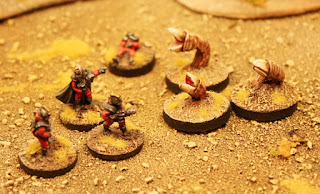 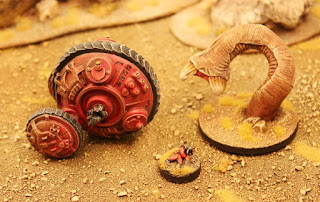 Above are the four pictures which were taken in playtesting.  We played twice.  Once with Prydian Army Retained Knights and once with a mixed Khanate Force of a Pugnus and some Legionaries. Great fun!