Our anniversary month is now over and as the autumn begins to haul itself once more towards Scotland we are delighted to move into September and to tell you that this month is all about the Prang!  Yes, new Prang designed by Eli Arndt and for the first time a Prang free monthly miniature sculpted by Sam Croes.

“Following on the coat tails of the devastating incursions by Prang Raiders onto the surface of Faercycle II the military infrastructure upon the cold but valuable planet was increased.  This was in 4326 IC and the re-enforced Planetary Militia under General Canvarus held the line with the assistance of a small force of Retained Knights of the 157th Regiment.  Orbital space was not compromised and the aliens were wiped out after refusing to surrender when they could not get uplift from the surface.  The processing of titanium continued for the war effort.  It was not long after this that initial contact was made with the Prang proper rather than the raiders whom up to that point were the only representatives of the race encountered.  A peaceful delegation of two small Ancep Drive equipped starships landed at Ismere starport and were received by a planetary delegation rather than a military escort as a sign of our intention to avoid conflict.

It took two days and a lot of head scratching but eventually a means of communication was established using a combination of sign language and object comparison.  Shortly after this General Canvarus met with the planetary governor and a Prang named Throag.  Throag would be the ambassador to Prydian Space and to Humankind.   I will admit that strolling around Ismere with an alien some three times the bulk of a man did raise some interesting situations.  But we made efforts and so did the aliens to make peace with the people of Faercycle II and Throag made what amends he could for the raiders actions with apologies, promises and gifts of luxuries and clothing as was the Prang custom.  We did turn to the core of the arrangement after that which was simply put that the Prydian Army and the Prang team up to foil and then destroy the raiders upon their next incursion.

Ambassador Throag shared the knowledge that the lush farming world of Myrdan III would be the next target with the aim of carrying off people and crops.  A task force was organised and dispatched to the nearby Myrdan stellar system.  This was in 4328 IC and the raid was countered and for the first time we saw the regular Prang Army take on rogue members of their own kind.  Caught in a pincer on the ground and in local space all three of the raider ships were destroyed and the threat removed.  After this and a period of time touring that star cluster and other minor skirmishes the Ambassador was conveyed to the New Glastonbury system in 4330 IC and became the first alien to set foot upon the Tor in at least a thousand years.

Thanks in large part to the allied defence of Myrdan III and the good works of Ambassador Throag the Prang have now begun sending troops and vehicles to aid us in the growing war against the Shia Khan Empire in Camarthen space.  We need all the help we can get.
Governor Aldo Lefarge of Faercyle II.  4331 IC 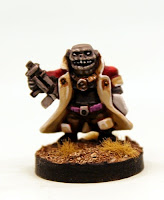 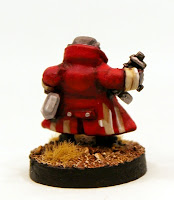 Say hello to Ambassador Throag of the Prang who is the thirty seventh free monthly miniature.  A 15mm alien character which is free in every order every time all month before being retired. This miniature is automatically put into every order at the rate of one per order regardless of order value.  It can also be bought in any amount on the monthly IMP page of the website for this month only too before being withdrawn on the first of next month.  We are into Year Four now and if you missed it you can see the Year Three Collection on the website.

IMP37 Prang Ambassador is a fantastic character in its own right for any science fiction setting but his real place is alongside Prydian forces or Prang Army fighting against Prang Raiders or the Shia Khan Empire. This miniature is in one piece and stands approx 20mm tall and is armed with a Tumbler SMG.  There is a growing page on the Ion Age website where the current and all former IMP series free miniatures are shown so that you can see what came before.  Enjoy looking at what came before. 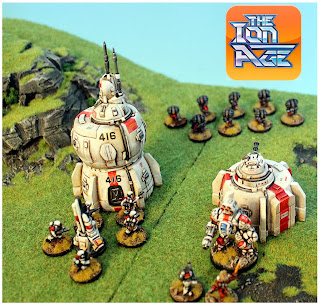 We ask you to sign up for a website account with us on your first order.  Why?  For one reason only. Not to send you emails (we never will.  If you want our emails sign up for our Mailchimp list on the right top of the blog) or to pester you; but only to keep track of the Reward Points that all orders with us earn.  Reward Points through our online partner Sloyalty which can be used once accumulated to get discounts or free stuff at any point in the future.  Learn more about this HERE. Every order earns Reward Points!  Yes free extra value.  Part of our promise to keep the fun in wargaming.

This is our first bulletin of the month and I want now to give you a little bit more on what you can expect during September 2016.  As you may have guessed we have new regular Prang army miniatures by Eli Arndt which will be released in the first half of September.  The tip of the spear for the Prang Army!  The article for the release of these will feature a lot of images and also come concept sketches too.  You can see all the current Prang on their page of the website.  We will then have a free PDF for Patrol Angis with stats for the use of the new miniatures in the game.  You can see the free PDF for the Prang Raiders on our blog HERE.  Another two items this month following up on Aris's excellent Uniforms of the Prydian Precinct we will be presenting the cover art of both the new Patrol Angis and Callsign Taranis books as art prints for purchase!  Lastly we have a new monthly special...this time on one of the favourite packs..in a new guise...we have 25% off the new resin Havelock Battlesuit for the whole month.  The offer is live and an article will appear about it in more detail. 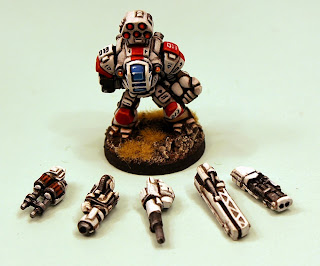 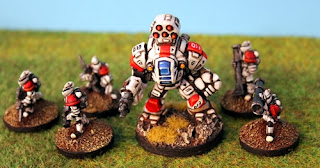 As always if you are reading this bulletin later in the month or further into the future please do have a look at our blog and use it as a time machine to read all the excellent content that is there going right back to our start.   Try September 2014 for instance!