The Shia Khan uses technology that is more advanced that our own, that is sure.  Though many of its troops are apparently slaves and are relatively poorly armoured and armed with Malig and Betrayers being more in common with our Planetary Militia and Muster regiments and their Legionaries a match for our Muster and Retained ranks there are troops evidently which are not expendable slaves.  We speak here of the elite formations of a Legion and more specifically the Nox.  The technology involved in the Jupiter series of plasmastic weapons is in our estimate a century or so beyond our own best efforts (see Academy Auto-Trainer Series 16) but the design contained within the Nox Segmentum pattern powered armour is much beyond that.  Other Khanate Troops use the weapons that Nox carry though they operate in teams of two rather than a Nox which can wield the weapon alone.  However within the sphere of the Legion itself and not speaking of Psychoborgs and other specialised threats it is the  Segmentum pattern armour which has baffled us.  Only a handful of Nox have been captured and none of them alive due to what we think is a flesh dissolving gas which is triggered if their armour is opened without the right seal codes.  This gas also corrodes the internal fittings of the armour to the point that only rudimentary inspections can be made.  In fact we have lost three expert fabricators to booby trapped Segmentum suits with imploder bombs.  Information that is known consists of the following.  Firstly the alloys used in the Segmentum's construction cannot be determined but do contain titanium as a stabiliser with a resulting hardness some third better than Alwite and on par with Noblesse series used by Desteria Knights despite being thinner.  Secondly the internal power system of Segmentum is much more efficient as the self fuelling batteries use technology similar to ours but are nearly half the size and also provide the charge for carried weapons such as plasma and laser system whereas our own Alwite powered armour cannot do this.  Thirdly the armour seems to fill with a thick black liquid when sealed which cushions impacts and trauma more effectively that the padding and gel layers in Alwite.  Lastly and most troubling are the seemingly standardised Cynue ports in the neck and chest sections of Segmentum powered armour.  While such technology is rightly banned in the Prydian Precinct after the tragedy of the Gurtan Activation the Khanate seem to give artificial intelligence assistance to Nox in combat.  Research continues and we do hope a break through will be reached.
Academy Auto-Trainer Series 17, New Glastonbury, 4332IC

IAF062 Nox Command Demos
Those who lead the elite infantry of a Shia Khan Legion are put into the command of the Nox formations.  Our third brand new pack is meant to lead the others into battle. This pack contains give white metal miniatures depicting Nox in command and special poses a senior Officer with twin weapons (Porus Rifle and Cupid Pistol), a banner bearer, a lesser officer with Flora Grenade Gun, a comms specialist kneeling with Hydra Laser Shotgun and a casualty pose (even Nox can die in combat).  Nox miniatures are about 18mm tall and broad across the shoulders. This code can be bought as a pack of five miniatures or as single poses or three packs saving 10%.  Price 5.00GBP per pack.  Go HERE.

There are the other Nox codes from the Shia Khan Empire in 15mm scale.  IAF052 Nox Demos with Jupiter Plasma Rifles and IAF051 Nox Demos with Janus Blastguns.  We are having a special offer until the end of September.  The prices of these packs (packs and single miniatures within them) is reduced 10% from normal.  I's already on screen so just add them to your cart for the saving. HERE for the Khanate Army page.

IAF052 Nox Demos (Jupiter Plasma Rifles)
This pack contains five white metal miniatures depicting Nox armed with Jupiter 46mm Plasma Rifles in various poses including a minor officer in command helmet.  Nox miniatures are about 18mm tall and broad across the shoulders. This code can be bought as a pack of five miniatures or as single poses or three packs saving 10%.

IAF051 Nox Demos (Janus Blastguns)
This pack contains five white metal miniatures depicting Nox armed with Janus 47mm Grenade Blast Guns in various poses including a minor officer in command helmet.  Nox miniatures are about 18mm tall and broad across the shoulders. This code can be bought as a pack of five miniatures or as single poses or three packs saving 10%. 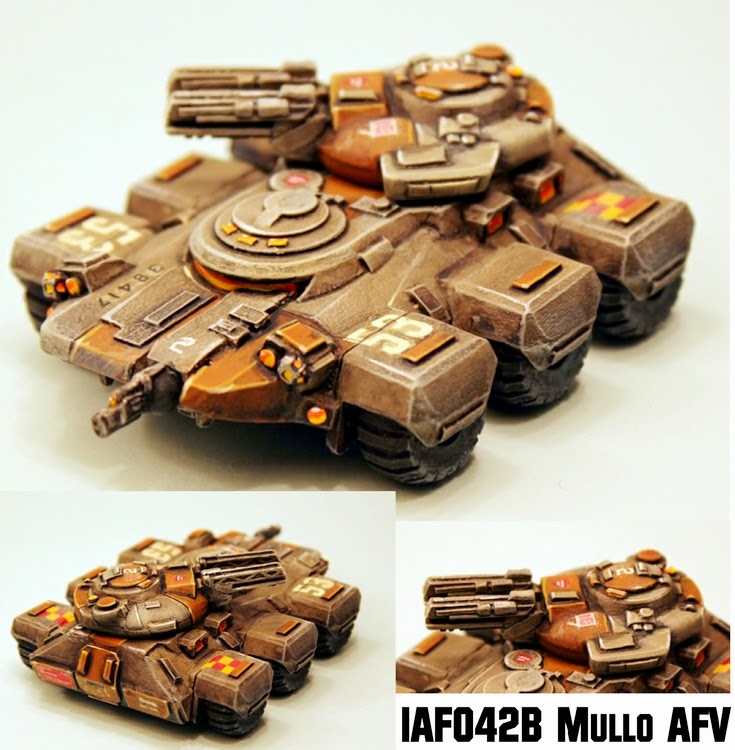 Mullo AFV Early Support Offers end on 30th September!
The IAF042 Mullo AFV is now online in our latest Early Supporter Offers (ESO's) and its a great chance to get yourself a medium science fiction space opera vehicle unlike almost any other.  You can read more information and see parts images in our Sneak Peek Mullo posting by clicking through.  The Mullo is the medium size of vehicle in our range in 15mm scale which is ideal for Retained Knights and virtually any other space opera force.  Bigger than the Adder series of Combat Cars this is the wheeled variant of the model to which others will follow in coming months.  A Mullo is an Armoured Fighting Vehicle meaning that it fills a variety of roles from gunnery support to troop transport and strong point defence; tasks it is well suited to.  Once assembled the Mullo AFV wheeled measures some 80mm in length with a width of 70mm and a height to top of turret of 30mm. You have only a few days left.

Information Burst
We are a week off the end of September and for us this month has just vanished in smoke we have been so busy on design work that will appear for our Christmas Season.  That being said its a big week this week for the following reasons.  You have only a few days to get in on the Mullo AFV offers, to save on Nox codes and to get IMP013 Alouten Veteran free in your order.  This is our last release and offer promotion of the month.  This aside we did put up a first look blog post about the coming soon squad pack of Female Muster in 15mm scale.  Its well worth a look and a read.   We are also opening up a dialogue with our agents and biggest personal customers on the frequency of our releases and if we should move to fortnightly releases rather than weekly.  If you have some input on this please do contact me by email or comment.  Lastly remember that by placing an order with us you will sign up for an account with the website and that means you get Reward Points in all purchases (plus the monthly free miniature).  These points can be used any time to get free products and discounts on orders.