On more Worlds than the Arks ever saw!
Its so good you will wear out your jaw!
Its the taste that gives you the finest feeling!
Stop on by for a Smile and some good taste meal eating!
We love to fill you up so...look no further than Happy Burger!

In the Prydian Precinct there are guilds which span whole worlds and while most of these are governmental and financial as well as military there are others which are devoted to a purely commercial end.  As the Ancep Drive began to spread the news of the Code Gallant and the glue that would bind the worlds of the precinct to New Glastonbury and the Tor another idea travelled with these pioneers.  From New Glastonbury a cook and former soldier Jedard Eackson took his idea of a take away eating house that would cater to those on a modest income who wanted taste more than the nutrition of a basic diet.  Happy Burger was birthed on this notion and on every world, colony, settlement, asteroid any and all meat and other protein based animals of any kind allowable were turned into patties and then blasted with super strong spices.  This gave a universal taste.  A Happy Burger meal is the same everywhere.  By the time of his death Eackson at the ripe old age of one hundred and sixty had introduced robotic staff into his eating houses mainly due to the high turnover of Human staff whose noses could only take so much.  Happy Burger Bots are pre-programmed to be cooks, waiters and more.  As the Prydian Civil War has spread many outlets of Happy Burger have been abandoned but their bot staff continue with their tasks attempting to serve empty meal boxes to passing League and Prydian Army soldiers.
Academy Auto-Trainer Series 61, New Glastonbury, 4337IC

The IMP19 Happy Burger Bot is March 2015's free 15mm scale miniature for the month which is automatically put into every order at the rate of one per order regardless of order value.  It can also be bought in any amount on the monthly IMP page of the website.  A pre-programmed robot which carries out the orders of service given to it by its branded bosses at Happy Burger this is a characterful miniature with its ball shaped head and friendly face has a lot of possible uses.  Why did we create it?  Its not part of any army but it gives you a taste of the wider Ion Age setting.  Carrying a tray and with the HB logo emblazoned upon its chest the Bot stands 17mm tall and is a one piece white metal miniature.

Here are some views of the miniature from different angles: 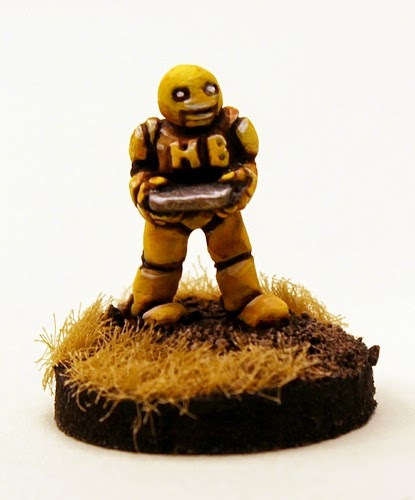 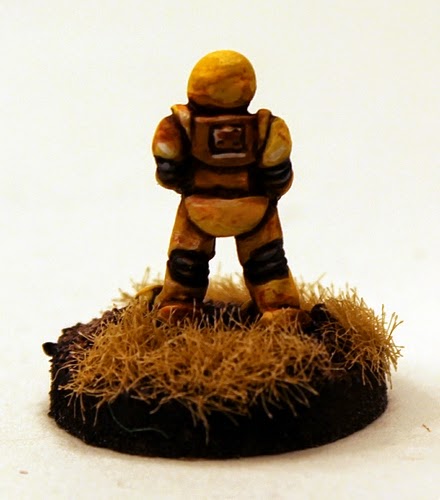 This month we have a fun free miniature as March will see us getting our first 15mm wargame title up for pre-order as a book but also as a game pack too.  Its going to be a month of some releases and some looks at things which are coming soon.  Did I mention it was Patrol Angis and that there would be a unique miniature in the game pack...well that is for later.