“Move up slow.  Nice and slow.  Watch your fronts.  No reports of enemies near us but that ain't no reason to get sloppy.  We all want to go home in one piece.”

The ten members of 4th Squad advanced in three elements with a fire team of four to either side, the command stick in the centre, their rifles ready and readouts in their helm visors.  An hour earlier the Vicar close support artillery deployed from the 334th Regiment's base Cassilis portable castle had swept a near company worth of Maligs and Legionaries out of this small settlement.  Artillery was rarely used in this way but against the alien Khanate and without a civilian population it was done with little hesitation.  Hyper velocity shells had pounded a quarter of Fergusville into ruins impacting with so much force that little remained.  That was the problem with the big guns they left nothing for the victors. But then no one thought that Camarthen would ever be anyone's ever again; it was too far gone after so much fighting.

Ahead of them was a typical SEORC type Habitation Dome or at least what was left of one.  Private Racknell let out a low whistle.  The domes were known for being vacuum rated and with their buttresses and superior quality rubbacrete construction it took a lot to utterly destroy one.  This dome had evidently  been crater by a direct hit from a Vicar shell.  Its walls were nearly reduced to ground level and only the stump of one buttress remained upright like a tooth in a rotten skull.  Titanium struts ringed the blackened rubbacrete edges torn like paper.  Personal effects including cindered clothing and info pads were scattered around the smashed control console that were a feature of most SEORC buildings.

“Can that Racknell.  Ain't pretty but least no one was in there.  Move up.”

At a slow walk the squad passed the cratered dome and one by one their attention fell away from it and back to the rubble strewn path ahead deeper into Fergusville.  The artillery strikes had left the middle of the settlement untouched and the enemy were still there no doubt.  Last to pass was Private Racknell who peered into the blown out structure.  Perhaps he was looking for something of value a spot of brightness indicating coins but the only brightness was the neon pink of a child's sandal melted into the strutted floor of the dome.  Racknell trotted to catch up with the rest of the squad.  Best not to think about who that sandal once belonged to and where that child was now. 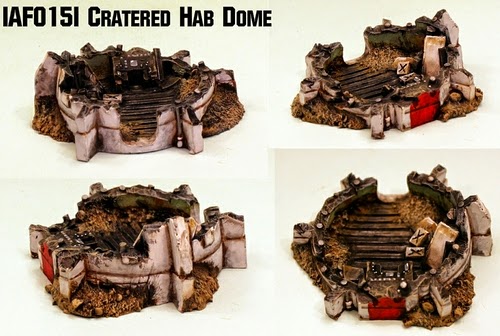 IAF015I Cratered Hab Dome
Hab Domes are tough.  They need to be.  But sometimes that tough exterior comes up against something so lethal that it leaves the Hab Dome a totally ruined shell of what it used to gloriously be.  Since we began our terrain range we have had requests for damaged and destroyed structures and after some hard work we can give you just that in the form of the Cratered Hab Dome.  A high quality grey tone resin one piece casting which is 65mm wide and 10mm to 25mm tall with a high degree of external and internal detailing.  It fits in well with the rest of the terrain range such as the Hab Dome and Block House.

Suitable for use in any science fiction setting as well as The Ion Age.  Decorate your wargame table.  As always this code can be bought as a pack or as a single or select the three packs and save 10% option on the page.  Go HERE.  Price 4.00GBP. 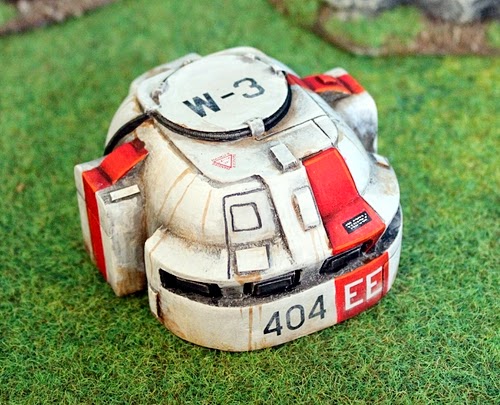 IAF040 Block House
The Block House is a thickly walled structure made to take a real pounding in far future combat protecting colonists and troops alike.  It is a high quality grey tone resin one piece casting which is 70mm long, 65mm wide and 35mm tall at its furthest points.  It has a lot of external detailing on all sides and roof including the universal mount used on the Hab Dome and four firing slots on the front.  It also has a rear airlock door and two side blank mounting points.  Suitable for use in any science fiction setting.  You will be able to make a whole settlement including strong points to keep your settlement safe.  You can add any of the IAF015 Top Mounts or the IAF015 Tower Module to the top of the Block House and the locks and points line up for side mounting Hab Domes or other Block Houses. Decorate your wargame table.  As always this code can be bought as a pack or as a single or select the three packs and save 10% option on the page.  Go HERE. Price 9.00GBP. 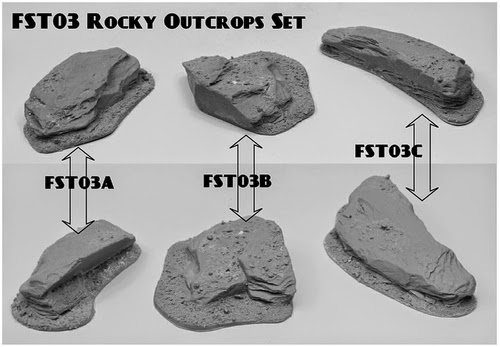 FMS03 Rocky Outcrops (in stock from 15mm.co.uk this week!)
On our website from our sister brand 15mm.co.uk. This pack comes with three different highly detailed polyurethane resin terrain pieces depicting large several levelled outcroppings of stone or rock.  The three pieces are as follows.  Firstly (FMS03A) the medium sized 90mm by 50mm and 20mm tall rock with a recessing rear side, secondly (FMS03B) a larger rock with a sheer rear and small area to the front sized as 85mm by 75mm and up to 25mm tall and lastly the wall like rock (FMS03C) the largest at 115mm long, 45mm wide and 25mm tall. 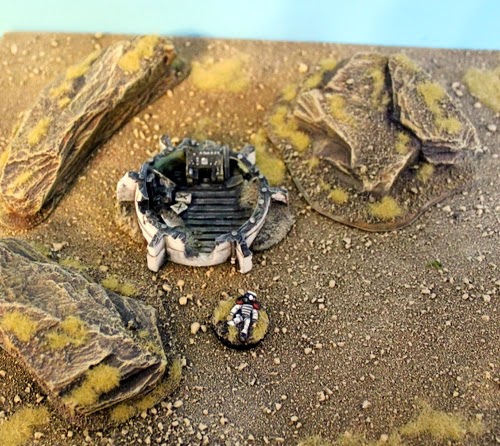 Versatile and you can buy the set or buy three sets and save 10% along with a choice also of purchasing single rocky outcrops as well.  Price per set is 8.00GBP.  Go HERE. 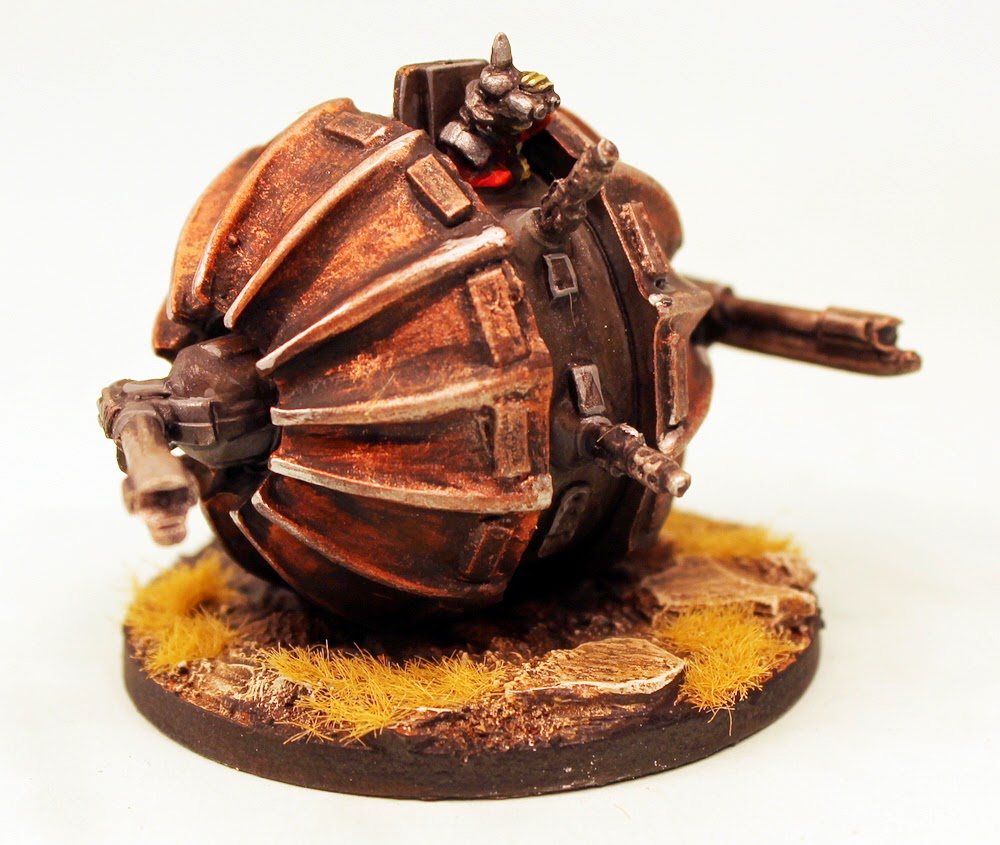 Last Week for IMP10 Malig Tank Ace free and Infernus Tank Offer!
On the 1st of July we will have a new free miniature so if you are keen on getting the IMP10 Malig Tank Ace for free at the rate of one per order (plus you can also purchase him as normal too and get one free extra!) then now it is the time. See the current IMP Miniature HERE.  On popular request we have also made the following offer which is valid until 1st July also.  We are offering 10% off  the crazy IAF046 Infernus Tank.  This rolling ball of death is down to 7.20GBP and you can get it HERE.

Information Burst
Busy week this week as we enter the last few days for the current IMP free miniature in June.  Those who have already gotten the Malig Tank Ace have sent me emails and messages about just how useful and unique the little metal fellow is.  Enjoy him and the special offer if you are in a mind for Space Goblins.  I can confirm we will have a new Early Supporter Offer (ESO) set in July and it will be on another group of Prydian vehicle codes.  This week also sees a first for us in the form of stocking a terrain code from our sister brand 15mm.co.uk.  Normally we do not do this but the Rocky Outcrops are featuring in our photos so it seemed a good idea.  Pick up a set if you are keen.  Our lead designer Sam Croes spent a lot of time creating this week's release with a massive amount of work upon his original Hab Dome to create the cratered version which as it turned out is almost entirely an original design its so altered.  We have a blog post about the League of Canlaster and showing photos of their Msuter and Adder painted in their schemes for you to look at HERE as well.  Lastly remember that by placing an order with us you will sign up for an account with the website and that means you get Reward Points in all purchases (plus a free miniature).  These points can be used any time to get free products and discounts on orders.