The Autumn is here!  October will see an Early Supporter Offer with a brand new and frankly awesome addition to The Ion Age from a new designer as well as some news and a new month long offer on a core code from the range at twenty percent off.  Awesome!  Visit us HERE or read on for more and thank you for your support of our space opera setting.  Oh and if you like the image below it is part of one of our posters. 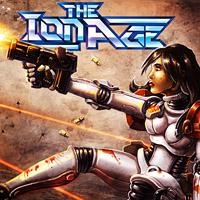 There was a smooth hum and vibration that began as Kimball pressed the start up sequence into the battlesuit's raised front plate. Transmission systems started up and the power core cycled at a low rate. One by one the displays on the inside of the front plate began to wink into life showing reds that flowed to amber and then into green ready status. Kimball settled himself into the padded pilots frame of the Steornede and placed his feet onto the grippers that quickly molded themselves to his bare flesh making themselves an extension of his legs. He reached out and flicked the primary switch that brought the front plate down. As it locked into place the titanium alloy clamps around the plate clunked home sealing it airtight and the displays were now at eye level. Each of Kimball's arms sat at his side with a control stick and buttons for the weapon systems in the arms of the battlesuit. He had been the pilot of PC119STR for two years but to him the machine was simply called 'Beth'. The real Beth had left him a year ago for a guy that worked for Maudlin in a high rise block in down town Pelcan City. More money but less fun. Still his Beth was purring now and would do as he told her. Around him the five other battlesuits in his platoon were showing ready status. He ran a check on the twin Moth 88 cannons which were his Steornede's primary weapons and they showed armed with twelve thousands case less rounds loaded. Kimball was ready.

It would not be a long walk from the barracks to the combat zone. Not now. His Beth had been in action twice already against the aliens and the second time he had been lucky to get out alive. On the outskirts of the city they had been encircled as the barricades had fallen. He had been rescued with a magnetic lock from a dropped line that had lifted his Steornede up and out of harms way. Damn lucky that grav platform had seen him as it floated over, his ammunition was expended and Beth just could not run like those fancy Havelocks. This time the enemy was only a few streets away and Kimball doubted he would ever breath fresh air again so the smell of Beth would be last in his nostrils. He would die inside the battlesuit. He would die to give the people time to escape the city. Kimball wondered if the real Beth was still alive. Was she dead or had she got out already? Part of him really hoped she had.

Using the platoon comm he signalled the order to move out. Up the ramp and into the street. His legs moved and the Steornede amplified it and stomped forward into a fight against an alien enemy that seemingly could not be stopped.
Captain Frederick Kimball, Pelcan City, Camarthen Prime, 4334IC - From The Khanate Return

The Twenty Percenter!
This month you can get 20% off another code in the range to expand your collection and this time it is the mainstay of the Planetary Militia defence force battlesuits! Go HERE for it.

IAF072A Steornede Battlesuit with Twin Missile Pods
The defence forces of the Prydian Precinct have their own battlesuit to put them on an equal footing with those who would invade or insurrection their homes. The Steornede is that battlesuit and this is the first variant made for short range anti-vehicle and artillery use. This code comprises a highly detailed 15mm scale miniature which is approx 30mm tall supplied as a one piece resin body and two separate white metal arms mounting Anda 60mm missile pods.

IAF072B Steornede Battlesuit with Twin Moth 88 Cannons
The defence forces of the Prydian Precinct have their own battlesuit to put them on an equal footing with those who would invade or insurrection their homes. The Steornede is that battlesuit and this is the second variant made for short to medium range anti-infantry use. This code comprises a highly detailed 15mm scale miniature which is approx 30mm tall supplied as a one piece resin body and two separate white metal arms mounting twin barrel Moth 88 Cannons.

Reward Points with your Account!
Enjoy the special offer and remember that when you order from us you set up an account with the website.  Log in each time you order for your points total.  See the little box at the bottom of the website home page. Why?  Not for emails, we have Mailchimp for that, but rather that you may get the Reward Points which each order earns that you can trade in later for discounts and free things such as Commander Murdo's Taranis Tank.  Extra value from The Ion Age. Excellent! 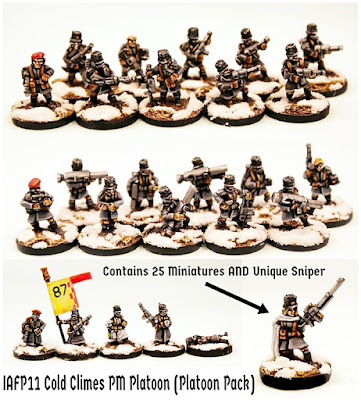 Data Pulse!
With the Cold Climes Militia platoon and packs now released we are into the next phase of releases and during October we will be backing them up with an Early Supporter Offer mid month.  This offer will be on a new large vehicle and an extra pack of miniatures for the Cold Climes and will give you the chance for single saving and a motor pool level of saving.  More details and such on this nearer the time and the molds are being made up soon!  As well as this we will have an alteration to platoon packs which will suit the IonFans who are now onto their five hundredth plus miniature and want to personalise a little more.  This and a story with new pictures about this month's offer code and a free Patrol Angis PDF with new official rules which is linked to the upcoming Early Supporter Offer.  We will have Update and Snippet Two on Baron as well which will give you a bit more on the book as creation continues.  A busy month indeed.