Baron Book update and snippet one

The month is drawing to a close and The Ion Age ends it with a short update on the progress of the fourth book for Patrol Angis namely Baron. Baron was outlined HERE on the blog in an article and this month I have been attending to several parts of the build of the book. This included assembling the play test results of exotic weapons and new equipment as well as organising the feedback from the Alternative Armies Tabletop Wargaming Group on Facebook where we had been chatting it over with IonFans. The selection process for which star systems will be detailed in the book is over and the selection of which Condot Mercenaries will feature is done too. Notes have expanded to form in the story of the Civil War and lastly some very over powered mechanics for the Starvaulters were rejected! Starvaulters are the best of the best but one versus a Battlesuit was a little much.

I want to share with you a little snippet...from the exotic weapons and equipment section which is part of the advanced rules in 'Baron'. Here are the first few hundred words.... 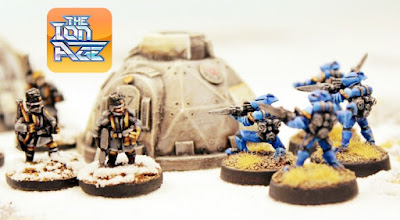 “You want this little sparkling box? You want to try and take it from me? Don't even think about it. My father gave me this when I joined up. Told me to use it when the time came. It’ll turn you into a wet stain on this grey dirt before you even get your rifle up. It's my box of tricks.”
Private Ricky Falacan, 403rd Regiment, Fulton Prime. 4322 IC

There are places in the Prydian Precinct which were never the remit of Humanity. Places where other creatures ruled and something of their technology remains behind them. Sometimes such things are unearthed or relics from the dim past of the Ban of Prejudice are found. Many of these rare weapons and items of equipment find their way into the hands of far traders, rich nobles or sons and daughters of the original locator. A lot of them are located to the edge of the Precinct that leads to the Galactic Core. Cost in points is given and follow the special rules as laid out.

Note: If you wish to add any of these items to an existing template type of infantry, infantry scale vehicle or vehicle you can do so using the rules for them if allowed. Simply remove a weapon and its points cost and replace it with your choice modifying the points cost total appropriately.

Clade Dancers: Often coming up illegally among Far Traders for sale these large slab like objects are too heavy for ten men to lift and are thought to have originated in one now totally ruined and abandoned temple complex on Clade Prime where they were its floor tiles. They are inert and can be fitted into structures or larger vehicles. They have no effect upon machines but they tamper with the complex minds of Humans. When one is nearby to people they describe strange visions of dancing shapes which grow stronger with proximity with an influence much like excessive alcohol when very close. They can be destroyed and are so when the structure (a Hab Dome) or large vehicle (like a Mullo or Taranis) is destroyed. When one is in play there is a chance of losing Activation Tokens during the Initiative Phase......

I intend another update on the book at the end of October with another snippet but I hope you enjoyed the above and the pictures too...man I had some fun with the new Cold Climes planetary militia. They use the exact same rules as the typical Planetary Militia which are in The Khanate Return but geared up for Arctic conditions. I want to thank everyone for their support of The Ion Age and my living from it.

We will be back on the 1st of October with more new awesome and a new month long offer too. Until then check out what we were talking about over the last few weeks namely IAF102F Taranis Lifter MBT Laser Turret and the Valerin Laser system plus all the free files for Patrol Angis as well as Ymel Sandworms in Patrol Angis free article plus those codes too and the big release of the Cold Climes platoon and packs as well