This month at The Ion Age our twenty percent off deal lasting for all of September is on a main battle tank in 15mm scale.  We call them lifters, but Hover or Blower or any other term for a hoverskirt will suit the IAF102F Taranis Lifter MBT Valrerin Laser Turret.  A superb vehicle in three resin pieces designed by Bob Naismith and Sam Croes.  Click through to see it or read on to learn about the Valerin weapon system (an extract from the book 'Baron' which is in the works right now) and see more. 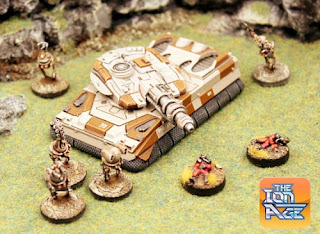 Valerin Laser Weapon System
Recognised as one of the most familiar weapon system families used throughout the Prydian Precinct the Valerin sits alongside the Angis, the Moth and the Anda as being in service in one form or another with almost all troops.  It is the primary light amplification by stimulated emission of radiation, focused light or laser weapon system varying in size from a hand gun to rifle and support as well as light vehicle all the way up to super heavy vehicle and fortification grades.  Among the Muster and Retained most Valerin lasers are of the 3Mw Rifle or the 15Mw Cannon which are used at a platoon or lance level and for Espaten portable platforms and are rarer when compared to projectile type weapon systems.  The only infantry who make extensive use of Valerin are the Starvaulters who each carry a 3Mw or a 9Mw rifle as well as a 2Mw pistol preferring the range and hitting power of a laser against select targets to the more brutal close range armaments of the Retained.  It is the Valerin 15Mw Laser Cannon which features on the Havelock and Duxis battlesuits as well as being the normal load out of the up armoured SuperBlue Adder and Afrara Strider variants.  There are two models of Valerin lasers which are found on heavier ground vehicles such as the Taranis main battle tank and the Magog.  These are the more typical Valerin 50Mw Laser Cannon which has superb range and pinpoint accuracy with no degradation of effectiveness in low gravity or outra-atmos battle environments.  The 'Eage' is a super laser cannon and at 85Mw it is the most powerful Valerin found on the battlefield.  It can be centrally mounted into Taranis hulls but more often this is the usual anti-armour turret on Cassillis and Moat portable castles.  Beyond this and ground warfare the Valerin 900Mw turret can be used against starships at effective ranges of up to one light minute for intercept or a million kilometres for direct line.  Characterised by long armoured barrels with stubby flanged cowls Valerin weapons all have a similar look.  The 50Mw Laser Cannon has these features as well as some not found in the smaller variants namely the Layton 07 argon cooling system which prevents overheating and allows the cannon to fire continually while sighting targets.  The Valerin is fabricated on three dozen worlds in tremendous numbers and while there are planetary differences in finer finishing the general reliability of these lasers is excellent.
Academy Auto-Trainer Series 52, New Glastonbury, 4335 IC 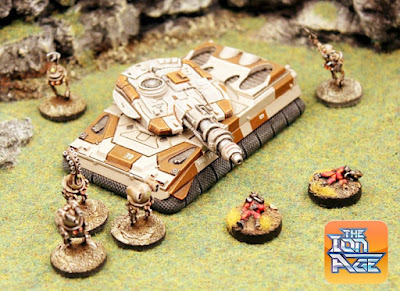 The Taranis is a god of war and at The Ion Age we have more than twenty 15mm kits with four different means of propulsion and different functions and turret main guns.  See them all HERE on the website.  In the above picture you can see our Valerin armed Taranis preparing to fire its main gun at a distant target while dead Legionaries give testament to a recently won encounter (from IAF123) and a small team of Taranis Runner Drones (IAF081)give protection to the tank as well as counter measures and small repairs.  Below it is the Retained Knights of Prydia who now benefit from the protection of Taranis in a scene which suggests battle is far away.  A strategist (the free special miniature from IAFP02) examines data behind the tank while a Noblesse (IAF057) takes a walk into caves which may never have seen Human steps before. 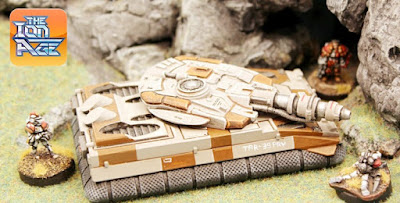 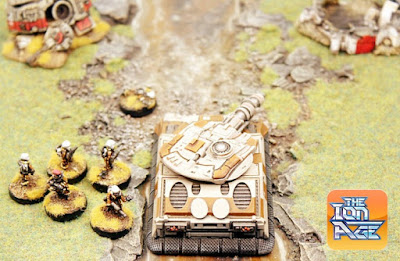 The third picture sees the Planetary Militia get backed up by the mighty Taranis which is using its lifter skirts to traverse a shallow but fast flowing stream.  There is trouble ahead as the troopers (from IAFP07) can see signs of enemy fire with a smashed Adder Combat Car (IAF037) and a cratered Hab Dome (IAF015I) being now nothing but destroyed litter upon the ground. 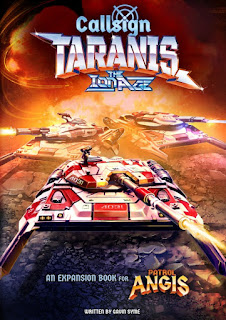 If you like the look of this month's special then have a gander at Callsign Taranis the expansion to Patrol Angis where you can learn all about the bigger vehicles.

Enjoy the special offer and remember that when you order from us you set up an account with the website.  Not for emails but rather that you may get the Reward Points which each order earns that you can trade in later for discounts and free things.  Extra value from The Ion Age. Excellent!