Do you want to use your IAF146 Tohlic Armoured Crawler in games of Patrol Angis?  Great!  Now you can with this free download article which is hosted on our website.  Get your copy now and have a read.  Go HERE or read on for more. 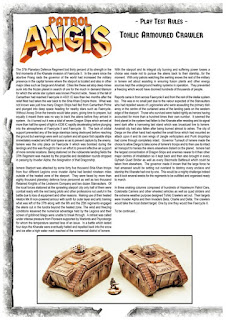 Using the Tohlic Crawler in Patrol Angis
A five page article containing both parts of the Faercycle II invasion story as well as an introduction to the Tohlic and its statistics and rules in play and where that bolts onto the Planetary Militia force builder mechanics in IAB03 The Khanate Return.  There is also a listing of all the codes we have for Planetary Militia and a short weapons table as well with the Urgan combat shotgun.  The article also has many photographs of the Tohlic and other codes plus scale shots showing you the new vehicle next to other vehicles and structures of The Ion Age.  Download it HERE.

The Early Supporter Offers are live until the early hours of the 30th October for IAF146 Tohlic Armoured Crawler where you can get savings plus free vehicles as well as free Cold Climes Veterans and free shipping on two of the bundles.  Go HERE for the offers. 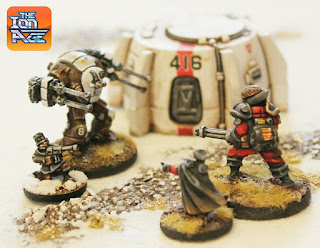 Our month long offer of twenty percent off during October on one code is on a stalwart favourite the weapons platform battlesuit IAF072 Steornede Battlesuit both variants designed by Sam Croes. It is a great looking infantry sized vehicle for a single pilot and supports your Planetary Militia forces. Go HERE for it or click HERE for an article showing you more and featuring a short tale of two brothers which carries on from the fall of Camarthen Prime.