The activation of the long buried Matter Gateway on Camarthan Prime saw the return of the Shia Khan Empire to the Precinct and initially the Prydian Army was caught off guard.  This was to be expected and despite the heroic efforts of the small garrison of the planet the Khanate forces soon overran them and spread out across the continent.  Fortune was on our side though as the aliens lacked air transport and mercifully space transport as well though they did seize several shuttles and cargo haulers which they boosted off world.  To this end the government of Camarthen Prime put in to effect a mass levy of its adult population and in the weeks before it was neutralised by enemy action and the situation became beyond tenable one of the rapidly formed planetary defence forces in recent times was assembled.  The quick fabrication of Aketon MkIII armour along with Moth Type 6 and Bodkin AP Rifles allowed for deployments though the lack of training, sometimes no more than a day or two, did mean appalling rates of casualty.  The PM Troopers were able to hold their own again rampaging Maligs and at a ratio of two or three to one a line could be held again Legionaries though against Nox and Psychoborgs resistance was futile.  As the Khanate brought more and more troops through the Matter Gateway and eventually whole Legions the situation became hopeless and only the intervention of a fleet dispatched from New Glastonbury kept the aliens contained to the Camarthan system.
Academy Auto-Trainer Series 59, New Glastonbury, 4334IC 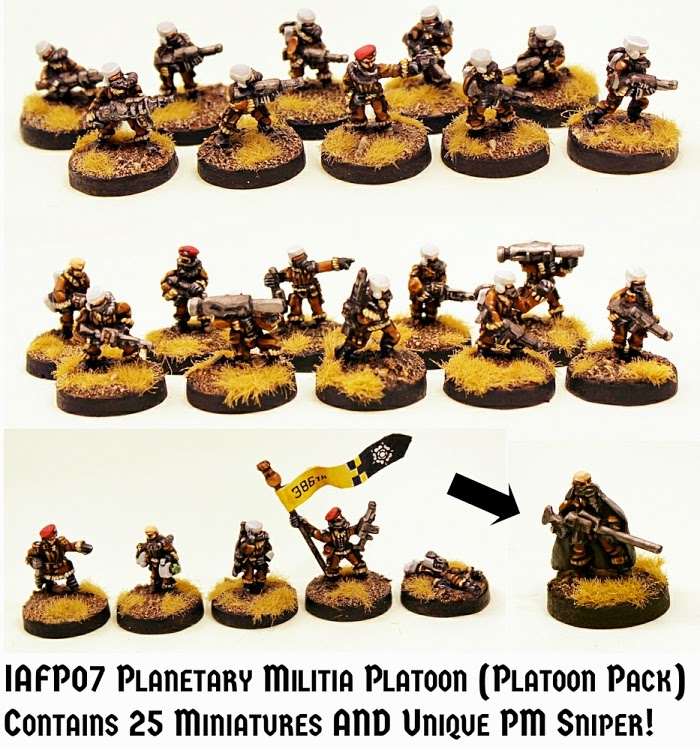 Was it only last week that we gave you all the Planetary Militia Sneak Peek posting where we explained what this new part of The Ion Age would look like and what its ethos was and what to expect?  Well it was and the last seven days have just flown by.  So now its time and we are proud to release three new pack codes and a platoon pack with a unique miniature in it all sculpted by Sam Croes the lead designer for The Ion Age.  Read on for details and if you have not already read the sneak peek post then its well worth a few minutes of your time.

IAF067 Planetary Militia 1st Squad
Our first code of brand new 15mm defence force miniatures!  Code IAF067 is a Rifle Squad, its the core pack for your PM forces.  This pack contains ten different 15mm scale white metal miniatures including seven varied poses armed with a Moth Type 6 Rifle, a lesser officer with a Moth Type 8 Pistol as well as a trooper with a Ron 32mm Hi-Ex Launcher and a Moth Type 12 Multi-Launcher.  These are 15mm versions of our 28mm range which have been requested right since our start and here they are!  As always this code can be bought as a pack or as single miniatures or select the three packs and save 10% option on the page.  Go HERE.  Price 5.00GBP per pack.

IAF068 Planetary Militia 2nd Squad
This is a Support Squad and it expands your core pack for your PM forces.  This pack contains ten different 15mm scale white metal miniatures several are armed with the Charlatan 22mm Launcher Rifle which is a common defence force weapon and others armed with Moth Type 6 Rifles who can act as loaders during battle.  There is a lesser officer armed with a Tumbler Mpi and two troopers with the shoulder held anti-armour Bodkin AP Rifle for dealing with enemy Battlesuits or Desteria Knights. As always this code can be bought as a pack or as single miniatures or select the three packs and save 10% option on the page.  Go HERE.  Price 5.00GBP per pack.

IAF069 Planetary Militia 1st Platoon Command
This is the Command Element for your PM forces.  This pack contains five different specialised poses which are as follows.  A platoon level officer armed with a Tumbler SMG, a Medic carrying his helmet under his arm, a Comms Trooper with Moth Type 6 Rifle slung, a Banner Bearer in beret with Moth Type 6 Rifle and finally a Trooper who has had a bad day and is now a face down casualty.  As always this code can be bought as a pack or as single miniatures or select the three packs and save 10% option on the page.  Go HERE.  Price 2.50GBP per pack. 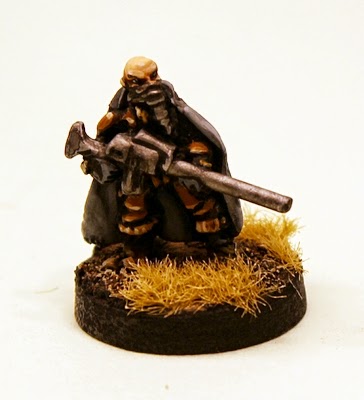 On top of this you get the unique miniature which is a PM Sniper with a modified Moth Type 6 Rifle in cloak which is found only in this pack and what's more its free within the pack.  Excellent!  As always this code can be bought as a pack or as single miniatures or select the three packs and save 10% option on the page.  Go HERE.  Price 12.50GBP per pack.

Information Burst
We are at the middle point of February 2015 and this year is going in fast.  While there will be more excitement which might overload your never endings there will be details of this nearer the time but I will say that you will be seeing not only news on Patrol Angis but also a page from the book and a look at the unique miniature it will be packaged with in the skirmish game set for the rules.

That and more information about the Xin Trade Fleet.  Remember that the free miniature in all orders this month is the IMP18 Female Youxia a lovely and special looking miniature which will get you started with the Xin in fine form. We have two weeks of releases this month and that is today and next week on the 18th February so its your choice when to order.  Next week we are releasing the Hazelwurm MkII Patrol Car, the Colabreta Patrol Carrier MkI and the Colabreta Patrol Command MkIII vehicles which go with the Planetary Militia infantry codes. There is a lot going on. If you have any questions or comments we always welcome them and are happy to help so say hello.   Finally remember that by placing an order with us you will sign up for an account with the website and that means you get Reward Points in all purchases and the free monthly miniature too.  These points can be used any time to get free products and discounts on orders.