It is my great pleasure to present to all of you IonFans the new artwork of a fellow who has gotten into the setting of the Prydian Civil War in a big way.  A person of sketch excellence I give you four pieces by Nic Evans.  Go along to the Alternative Armies Tabletop Gaming group on Facebook and join up if you want to see where he hangs out talking Patrol Angis. 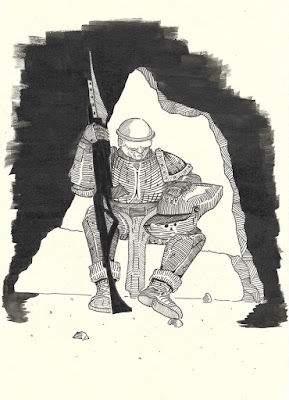 A Knight at Rest.  This Retained Knight has removed the helm of his Alwite Powered Armour and is deep in contemplation.  Perhaps he is considering the actions of the day and how they compared to the ideal nature of the Code Gallant or perhaps he is nearing the time to begin a campaign and is readying himself for war.  Either way this art captures the weight upon his shoulders. 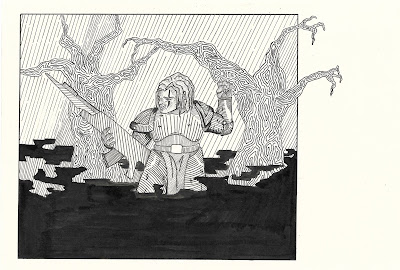 Patrolling the Swamp.  His arm raised to call a halt to an unseen advance this Retained Knight has grown out his hair and been on campaign for many weeks.  In the Swamps of an unknown world the enemy lurks...but where? 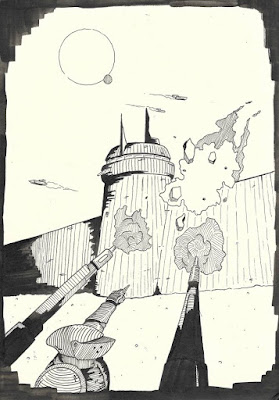 The Bombardment.  A wall stands before the advance of the liberating Prydian Army and it falls to this master of the artillery to direct guns in an effort to hammer down the barrier.  Long Barrelled Angis 25mm cannons fire their high explosive rounds to the parapet to begin the felling. 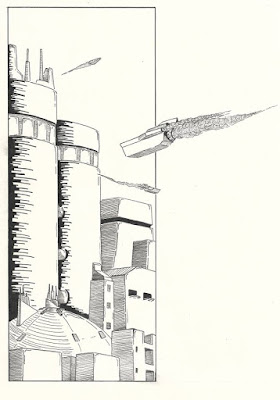 Bustle and Hustle.  This could be any one of thousands of cities across the Prydian Precinct where peace from the civil war is a fortunate reality.  Personal shuttles and repulsar transits buzz around and between the rubbacrete and golglass towers.

So there you have it. Excellent work Nic!  I love the retro style of these almost wood cuts which reminds me so much of the classic artwork of the 1970's when sci-fi was weird and alien with all manner of possibilities. 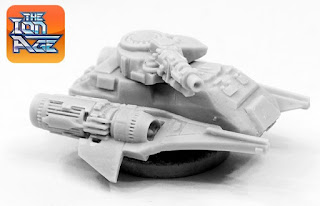 Later this week we will be returning with another IonFan blog post and then the last release of the month the SuperBlue 2.0...tank killer Adder!  The SuperBlue is a lean mean death machine designed by the madly talented Sam Croes.  It will be supplied with a free IAF160 Anti-Gravity Base too.