“The Shia Khan thought they could take what they wanted from the isolated Badlands of Cahokia Prime. They thought the Piasa had abandoned their ancient lands. They're about to be proven wrong...”

Following up on yesterday where we presented new artwork by an IonFan we now have a veteran wargamer in the scale and genre of 15mm science fiction being kind enough to show off his Tohlic Armoured Crawler before it sees battle (and paint) in the Prydian Precinct.  Larry Boester often makes me laugh with his comments and ideas as he expands his collection of 15mm scale miniatures and vehicles and while he loves Lifter (Hover) type propulsion the most he is also partial to tracks from time to time.

“The Tohlic Crawler is a beautiful beast. I just love that it LOOKS like it's a home to an entire platoon of boots or a trio of walkers.” 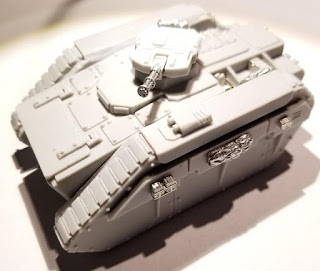 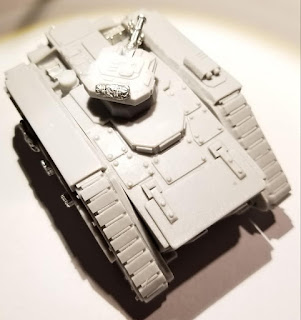 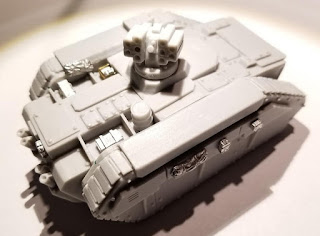 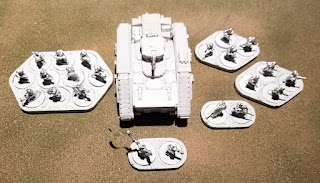 As you can see the Tohlic really appeals for the reason that Larry puts forward himself.  It has real presence upon the gaming table and it looks like it really could hold an entire Cold Climes Planetary Militia Platoon transporting it to battle.  That indeed is partly shown in the last picture with a Planetary Militia Platoon on Movement Trays arranged around the monster.  Thanks Larry for permitting this share of your pictures.

If you are keen on learning more about our largest vehicle kit here are its details.  We also have stowage and bolt on pieces along the lines of those shown in Larry's pictures in IAF065 Adder Conversion Kit; you can get a pack or single pieces from it. 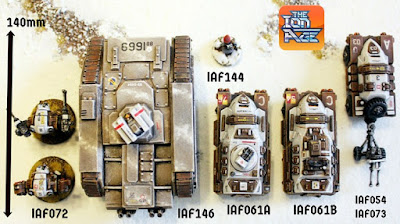 IAF146 Tohlic Armoured Crawler
This code contains all the parts required to assemble one large 15mm scale long distance armoured personnel carrier. Used for deep recon it can carry an entire platoon of troops or three battlesuits or combinations thereof operating for weeks away from base. Favoured by Planetary Defence forces but also used by Muster and Retained on suitably frozen worlds the Tohlic is composed of nine parts cast in high quality grey tone resin and white metal. 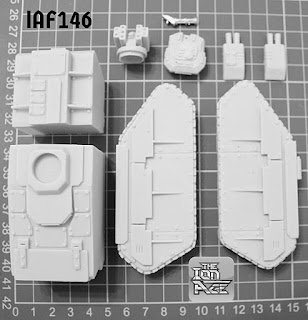 These are the forward hull, the rear hull, the left track unit, the right track unit, exhaust mount 1, exhaust mount 2, Turret 1 (Anda Missile Pod) and Turret 2 (Moth Rotary Cannon). Supplied with two different turrets to use and since they use the standard turret ring they will also fit onto other Ion Age vehicles and structures. This kit is easy to assemble and durable for use on table. When assembled the Tohlic is approx 105mm long and 40mm tall; it is a large vehicle.  Go HERE. 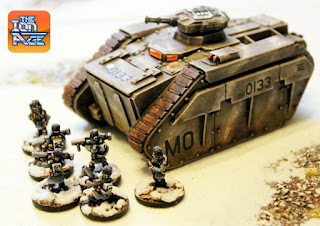 Thanks for Reading and see you soon for the new Superblue tank killer variant Adder!