As we outlined after the release of The Khanate Return the third book in the Patrol Angis series of titles we would be expanding the Shia Khan Legion forces.  We are delighted to make our November 2017 release with the first pack of a brand new client race; the Beotans. Sculpted by Sam Croes these lycanthropes are fearsome enemies who love short range and close combat.  Go HERE or read on for more information. 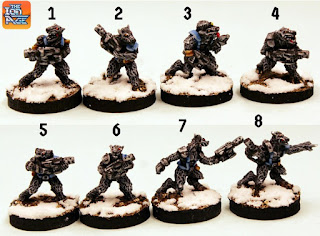 The Lycanthrope Beotans
Once the Matter Gateway was secure under the control of the Shia Khan Empire the battle for Camarthen Prime began in earnest. Digging to the surface and then unleashing a sustained campaign of conquest some of the battles were to capture installations and the secondary smaller starport of the planet located in the snowy north. This task was given in main part to the Beotans who were well suited to this kind of warfare. Humans have known of this species by hereditary legend and memory for millennia and initial contact with Beotans were greeted with shock. Beotans are Lycanthropes, otherwise named Werewolves!

Around the height a Human a Beotan is bestial in appearance with thick black or brown fur and long claw like nails on feet and hands. Their mouths are filled with vicious teeth and their eyes are well capable of seeing in low light situations. They operate in Tesserans and Ordo formations just like Legionaries and make use of the same weapons systems. They eschew the wearing of any kind of armour instead favouring a harness upon which they hang all their needed gear as well as gruesome trophies of combat. Beotans are often just called Lycanthropes by their enemies and do not tend to mix with other Khanate client races. They do work with Psycoborgs or Warlords in urban combat missions.
IAB03 The Khanate Return page 30.

IAF148 Beotan 2nd Tesseran
This pack contains eight different poses of 15mm scale white metal miniatures.  Beotans are Werewolves who dress in a combat harness and are used in cold climes and urban warfare.  The second Tesseran is armed with Mia 9.2mm Mpi close range weapons and is composed of troopers and a low level officer.  It is one of four Tesserans which make up a Beotan Ordos or platoon.  Covered in fur and with reversed knee they lope at high speed into battle and stand a little taller than a Human (17mm tall).  You have the option of purchasing a pack or three packs saving 10% or single poses from the pack for your collection.  Go HERE.  Price 6.00GBP per pack. 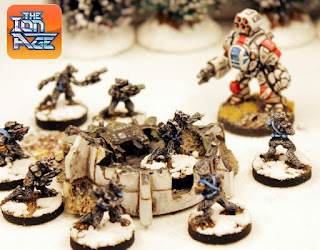 Above are two scenic shots from our own play of Patrol Angis and two scale shots of a Cold Climes trooper next to a Beotan and a Psycoborg and Legionary next to a Beotan.

Though this is the second Tesseran it is the first of this new client race released and we will be following up with more next month and after that too as our next expansion continues.  In Patrol Angis the Beotans are just about the fastest infantry on foot in the game at nearly twice the pace of a Pioneer Legionary!  We wanted to give you the smell of prey in November with this first pack. 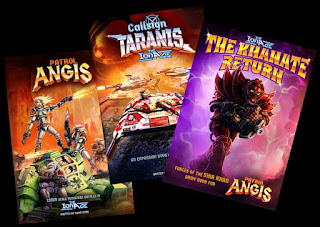 Aris just had his great five page free article on force building in Patrol Angis, download it HERE, and it is a great read. 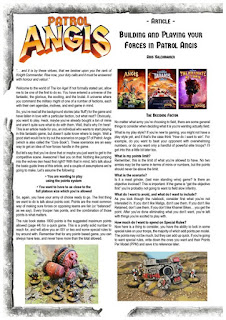 Go along to our 15mm Publications page for lots more for free and for the three books in the series.  The game statistics and more for the new Werewolves are to be found in The Khanate Return.  If you want to get into the game we recommend the excellent value Patrol Angis game pack or the digital downloads of the books. 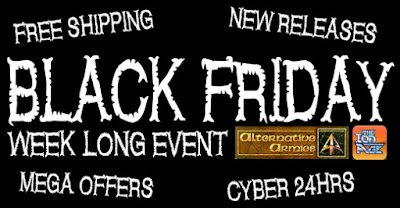 Our Black Friday Event is underway with free postage and other deals and special offers.  Read about it on our BLOG and as well as the new Beotans we have the popular Havelock Battlesuit bundle back just for this period until 27th November plus 25% off the Hab Dome this month!  Read the blog post for all of this and the coming Cyber Monday mega 24hr deal or go HERE.  Thanks.

We hope you like our new release for this month and that you get your claws on it soon!