"While part of the military ranks of the Prydian Army the honoured role of a Knight Errant is often aloof from the mainstay of its ranks.  There have been many text written on the reasons for taking up the sword and armour of the Knight Errant discussing why a man or a woman who has served many campaigns in the Retained feels the urge to leave their fellows and begin the Quest.  The quest is among the most daring exploit that a Knight can undertake an it takes many forms.  Reasons given are personal valour, personal loyalty, personal betrayal as well as love and adventure.  This can cause Regiments a staffing problem but it is generally looked upon favourably by commanders who will, once the quest is proven, aid the Knight in its starting stages of undertaking.  While many Knight Errants will leave the front lines and travel alone or in small groups some remain and continue to lead Lances and Banners in battle while the goal of their quest is in conjunction with the goal of the Regiment.  Knight Errants have typical combat gear and armour but often are more experienced in the arts of war and are certainly more driven by their desire to complete their quest.  It is not unknown for Knight Errants to be found on remote worlds and colonies aiding local Planetary Militia troops with their own conflicts while upon the quest.  A few Knight Errants of exceptional bravery and fame will be invited to join the ranks of the Starvaulters and to take part in their Great Quests.  The auto-trainer series has many thousands of recorded quests which the student can access upon request.”
Academy Auto-Trainer Series 05, New Glastonbury, 4322IC

The summer is here...well in Scotland the rain is now warm which is the same thing.  The Ion Age continues its journey this month with a superb female knight errant for free and also two fantastic releases later in the month which will bring the weight to your Khanate armoured platoons in Patrol Angis.  Working up to the Year Four Collection the tenth miniature of the year (ending in August 2017) IMP46 is one of the best looking female miniatures I personally have ever seen.  Our special offer for the month is 25% off the pack of Knight Errants of Prydia along with a new image of this much favoured pack.  The releases will be the Pugnus Light Tank and the Mannus APC which face off against Adders and Mullos in the ranks of the Prydian Army.  Both these alien vehicles are featured in IAB03 The Khanate Return and indeed if you are fortunate enough to own a copy of the book you will have already seen these weird Khanate wheeled vehicles in its pages. 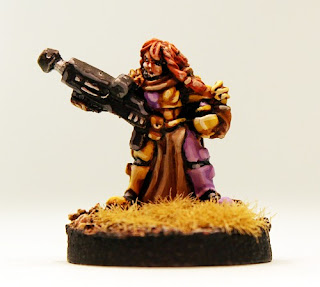 Free in every order, every time, all month. This miniature is automatically put into every order at the rate of one per order regardless of order value. It can also be bought in any amount on the monthly IMP page of the website for this month only too before being withdrawn on the first of next month. You can see the Year Three Collection on the website.  The Year Four Collection will be released in August and will mark the end of the monthly free programme at that time. 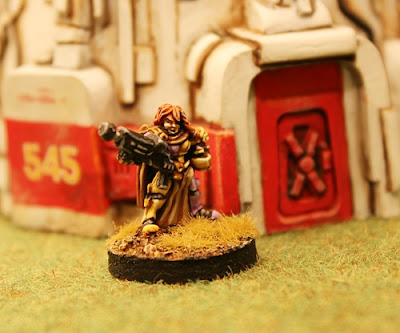 Standing 17mm tall and bare headed with her long hair falling across her Alwite powered armour the knight errant is armed with a Valerin Laser Rifle and wears a cloak. She is great for a character or leader of a lance. The painted example is a character called Briona Sullivan of the Barony of Messena (see it as Number 19 on the Uniforms of Prydia poster) who has an interesting story which will become clear later in June. There is a growing page on the Ion Age website where the current and all former IMP series free miniatures are shown so that you can see what came before. This miniature is worth 1.00GBP. 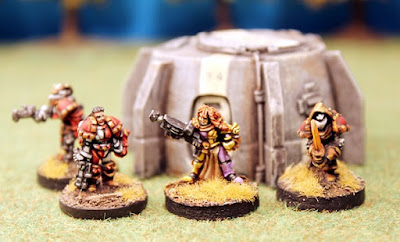 This month we have 25% off the great pack IAF057 Knight Errants of Prydia.  This offer ends on 1st July.  Just add to cart and it is the pack plus single poses from it to which the discount has been applied.

IAF057 Knight Errants of Prydia
Our first code of noble knights for commanding your forces!  While they are of Prydia with a different uniform they could be any of the numerous Marcher Barons too.  Code IAF057 contains three unique miniatures dressed in Alwite powered armour. The female Noblesse who is bare headed and armed with a Carnwennan Pistol (there are many hundreds of her already out in the word due to the IAF015 Hab Dome!) a noble Knight Errant with cowl and Octa powered sword and lastly a noble with twin Carnwennan Pistols.  These are 15mm scale versions of 28mm code IB32 Knight Errants which were requested right from the off for us.  As always this code can be bought as a pack or as single miniatures or select the three packs and save 10% option on the page.  Go HERE.  Price 3.00GBP per pack.

We ask you to sign up for a website account with us on your first order. Why? For one reason only. Not to send you emails (we never will. If you want our emails sign up for our Mailchimp list on the right top of the blog home page) or to pester you; but only to keep track of the Reward Points that all orders with us earn. Reward Points through our online partner Sloyalty which can be used once accumulated to get discounts or free stuff at any point in the future. Learn more about this HERE. Every order earns Reward Points! Yes free extra value. Part of our promise to keep the fun in wargaming.

Thanks for your support and for enjoying The Ion Age!