The biggest and most bad ass armoured infantry of the Shia Khan Empire now have their own 'Ordos', a platoon pack, which contains a full force of these miniatures!  Each Nox stands about 20mm tall and the platoon pack contains fifteen figures and an extra special Nox which is only in the pack and is added free!  Go HERE or read on for more information. 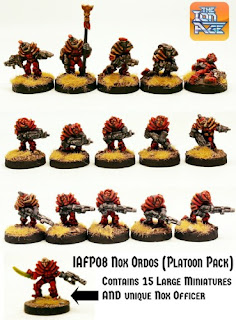 The Shia Khan uses technology that is more advanced that our own, that is sure.  Though many of its troops are apparently slaves and are relatively poorly armoured and armed with Malig and Betrayers being more in common with our Planetary Militia and Muster regiments and their Legionaries a match for our Muster and Retained ranks there are troops evidently which are not expendable slaves.  We speak here of the elite formations of a Legion and more specifically the Nox.  The technology involved in the Jupiter series of plasmastic weapons is in our estimate a century or so beyond our own best efforts (see Academy Auto-Trainer Series 16) but the design contained within the Nox Segmentum pattern powered armour is much beyond that.  Other Khanate Troops use the weapons that Nox carry though they operate in teams of two rather than a Nox which can wield the weapon alone.  However within the sphere of the Legion itself and not speaking of Psychoborgs and other specialised threats it is the Segmentum pattern armour which has baffled us.  Only a handful of Nox have been captured and none of them alive due to what we think is a flesh dissolving gas which is triggered if their armour is opened without the right seal codes.  This gas also corrodes the internal fittings of the armour to the point that only rudimentary inspections can be made.  In fact we have lost three expert fabricators to booby trapped Segmentum suits with imploder bombs.  Information that is known consists of the following.  Firstly the alloys used in the Segmentum's construction cannot be determined but do contain titanium as a stabiliser with a resulting hardness some third better than Alwite and on par with Noblesse series used by Desteria Knights despite being thinner.  Secondly the internal power system of Segmentum is much more efficient as the self fuelling batteries use technology similar to ours but are nearly half the size and also provide the charge for carried weapons such as plasma and laser system whereas our own Alwite powered armour cannot do this.  Thirdly the armour seems to fill with a thick black liquid when sealed which cushions impacts and trauma more effectively that the padding and gel layers in Alwite.  Lastly and most troubling are the seemingly standardised Cynue ports in the neck and chest sections of Segmentum powered armour. While such technology is rightly banned in the Prydian Precinct after the tragedy of the Gurtan Activation the Khanate seem to give artificial intelligence assistance to Nox in combat.  Research continues and we do hope a break through will be reached.
Academy Auto-Trainer Series 17, New Glastonbury, 4332IC 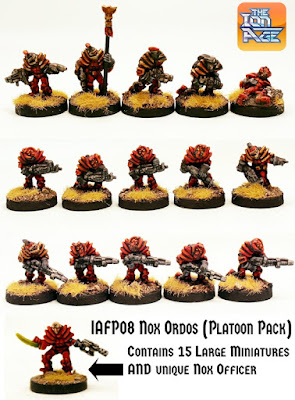 IAFP08 Nox Ordos
This platoon pack gives you a full Ordos (a platoon or force in Patrol Angis) of the heaviest power armoured warriors of the Khanate as well as a unique miniature only found in this code.  Fifteen different poses of miniature which are taken from these pack codes:  IAF052 Nox Demos (Jupiter Plasma Rifles), IAF051 Nox Demos (Janus Blastguns) and IAF062 Nox Command Demos.  On top of this you get the unique miniature which is a Nox lesser officer bare headed with a powered blade and Maia Mpi.  This miniature is found only in this platoon pack and what is more its totally free as part of the pack.  Excellent!   As always this code can be bought as a pack or select the three packs and save 10% option on the page. Price 15.00GBP per pack.  Go HERE.

You can find the rest of the Khanate Empire in 15mm scale on our website HERE including other Nox, the Legionaries, Warlords and of course the verminous Malig Space Goblins too.  Players of Patrol Angis can download a free PDF for using the Khanate in the game from our Drop Box by clicking HERE.  To see all articles on the great free resource that is The Ion Age blog click HERE to go to a refined post search for Nox on the blog. 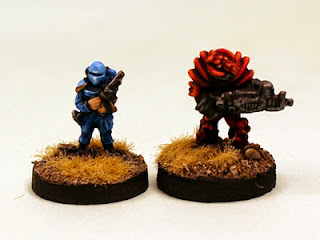 As you can see Nox are much larger and bulkier than Muster (next to a Canlastrian Musterman above) or Retained Knights.  They are on a size parallel to Desteria Knights the largest Human knights of Prydia and they are very tough indeed. Each miniature is about 20mm tall. 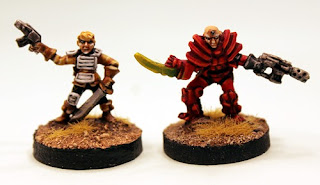 Now I know many of you already own our 15mm Nox and because of that there is an offer this month where when you place an order for any products if you wish to get the unique Nox Officer from the platoon pack INSTEAD of your free IMP38 Male Adventurer you can!  Just email info@theionage.com title it with your order number and then 'please give me Nox Officer rather than IMP38' and we will do the rest.  Excellent!

Information Burst!
This month every order gets IMP38 Male Adventurer free automatically. He is a very versatile character who fits into any setting as a bounty hunter, a mercenary, a guard or anything else you would like.  Standing 16mm tall and wearing rigid body armour while holding a large calibre semi-automatic Tumbler machine pistol and a sword he is a capable fellow.  Withdrawn when the month ends and replaced (he will appear next summer once more as part of the Year Four collection).   A big event will happen in the middle of the month with the release of Patrol Angis and Callsign Taranis as paid for PDF download books on our website!  Full news on this at the time. Our other and last release of the month will be a civilian pack into the Ion Age Universe range later in October.

Lastly we have a new monthly special...this time on one of the supporting packs for our mighty Taranis tanks..drones...we have 25% off the IAF082 Taranis Repulsar Drones for the whole month. The offer is now live and you can see more of these human sized robots by clicking through.