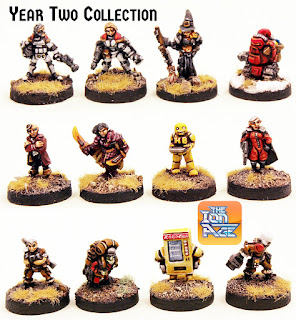 Year Three Begins!  Now that our second year of The Ion Age is at a close its time to release the twelve monthly free miniatures as set which can be bought as a set or as singles.  From September 2014 to August 2015 each of the IMF code monthly free's were given away with all orders month by month.  So if you missed any or want more just check out the Year Two Collection now.  Its been added to a new page that also has the Year One Collection upon it as well as the current month's free miniature keeping the 'years collections' all in one place.

Its been a fast second year for me and for the small team (really just myself and the awesome Sam Croes most of the time) who bring you The Ion Age.  Some of you think we are far bigger, some of you think we are American and a few of you think we are cool young guys.  Well you are right on the last one!  A small team here in Scotland that works hard following its own path for a massive vision of a far future space opera setting.  All of the money you spend with us creates honestly priced new miniatures from a team that loves wargaming.  That now said the 15mm range has just over three hundred different sculpts spread across Retained, Desteria, Muster and Planetary Militia along with Shia Khan Legion, Nox, Pioneers, Maligs and Nox.  We have about thirty different vehicles (not counting sub variants) and a range of buildings with two dozen different pieces.  Not bad in two years eh!  The next year...well we are going to get bigger and bigger and introduce things beyond the current scope of the website as well as more books. 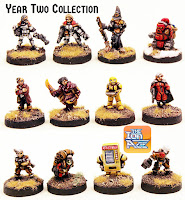 So what is the Year Two Collection?  You can see it HERE. Here is a list of the miniatures by month in this collection:

Each miniature is 0.60GBP or the whole set for 7.00GBP or you can purchase three sets and save 10% by selecting that option on the drop down product menu.  That is a very diverse collection of characters and fun 15mm miniatures.  Roll on Year Three!

If you have not yet signed up for our Mailchimp emails then I suggest that you do. The link is on the top of the right hand column of the Ion Age blog for you to sign up. As well as getting the latest news and information and releases you will also get the exclusive down low on the email only special offer each month where one of our codes is 25% to 50% off regular price.