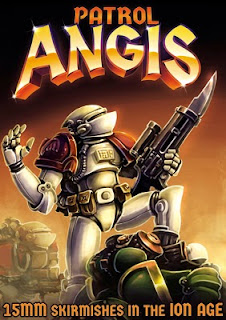 In the book you will find the full skirmishing rules along with solo play, part one of the Prydian Civil War background, game tables and statistics, troops and armoury of the Civil War, the Dando II Campaign and three introductory scenarios set within it and an article on just what is The Ion Age. A lot to read in a packed sixty four pages! Go HERE. 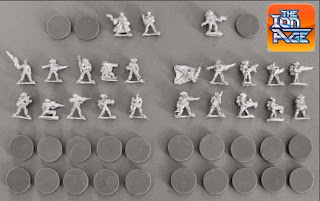 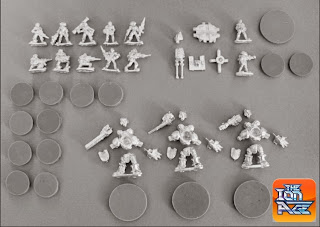 As well as a packed book you can purchase for wargaming we also offer Patrol Angis as a boxed set with two forces of miniatures to get you started and to play out the starter scenarios. Here is what is contained in the Game Pack and if you take the time to total it up compared to retail price you will see its a deal before any other offers are added.

The miniatures in the game pack are all supplied with our round resin bases as used in all our photographs of miniatures. Extra Value! 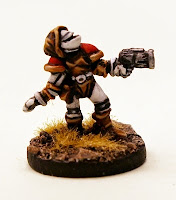 We are running a pre-order offer. Early Supporters of this new game can place their orders for it at 15% off release price on the book and the game pack options. This offer runs from today until about 9am GMT on June 1st 2015 when the month switches over for us and the new monthly free miniature appears. All orders containing Patrol Angis codes will ship from 1st June worldwide.

Remember not only will you get Reward Points (if you have Reward Points by all means use them to save more on this offer!) with your account for an order but you will also automatically get IMP021 Planetary Militia Drill Sergeant (worth 0.60GBP) which is May 2015's free miniature as well! Plus the unique Patrol Angis miniature as well. Go HERE.

All orders not containing these pre-order items will ship worldwide as normal. Please note we will have no further releases in May only this offer.
Free Files Coming Soon!
There are more materials coming for Patrol Angis for free. A folder of free PDF files to download that contains not only an additional starter scenario to those in the book but also counters to print out and a quick reference sheet. Bonus fun! More on this soon.

Calling Patrol Angis Playtesters!
Lastly there are sixteen named playtesters in the book and as per our agreement during playtesting in 2013 (yes that long ago!) every one of these wargamers is entitled to rewards. On top of your names being in print in the book you get free stuff! When you place your order for the book or game set you will get the offers as everyone else does but at that point email me on info(at)theionage.com with your order number and items will be added to your order for free. I will inform you of what they are by reply email. Excellent!

I know its been a long wait for this title but its worth it and it marks the full fledge launch of my own dream of space opera wargaming.  A cloud lifted from my brow as it were. There is a lot more to come. Thank you in advance for your orders and for your support. We all appreciate it.