The standard formation Muster Platoon is a very fluid and task possible entity. This has been proved in dozens of localised conflicts and also in the Civil War too. While we are not born to the noble ranks of the Retained or the lofty idealism of the Starvaulters we have our own elan, our own pride in our skills and our martial prowess. During your training you will learn this well. After you have earned your place in the ranks you will be assigned to a Platoon within your Regiment. Why a Platoon and not a Squad? The Platoon is the instrument of our war and our way of winning that war whither its against Yordan or Canlaster or if you are unlucky the alien horde. Our armour gives us some protection, certainly more than the low impact armour of the planet bound militia's, but not enough to slug it out with knights. The Platoon gets us around this and means that your Moth 6 Rifles and Anvil 888's can deal out some real damage.

Twenty two soldiers in a Platoon and from there its up to your Majoris how they use you. Against tough enemies the Platoon would divide into two squads of ten and a command stick of two. Able to deliver concentrated fire power on a target and secure in numbers. When facing weaker foes the Platoon might well divide into five fire-teams of four each and a command stick of two. Spread out and able to cover a lot of angles at the same time. But in some cases, in places where assault from much heavier forces is expected the Platoon can become a 'Pyre' breaking up into eleven sticks of two ready to light it up from anywhere.

So the Platoon is your best friend, your mother, your home. You will be one platoon among a hundred most of time maybe more at times but at all times it is the troopers in your own Platoon that will save your life and take the lives of the enemy. Remember that and your military career will be all the better.
Academy Auto-Trainer Series 52, New Glastonbury, 4335IC 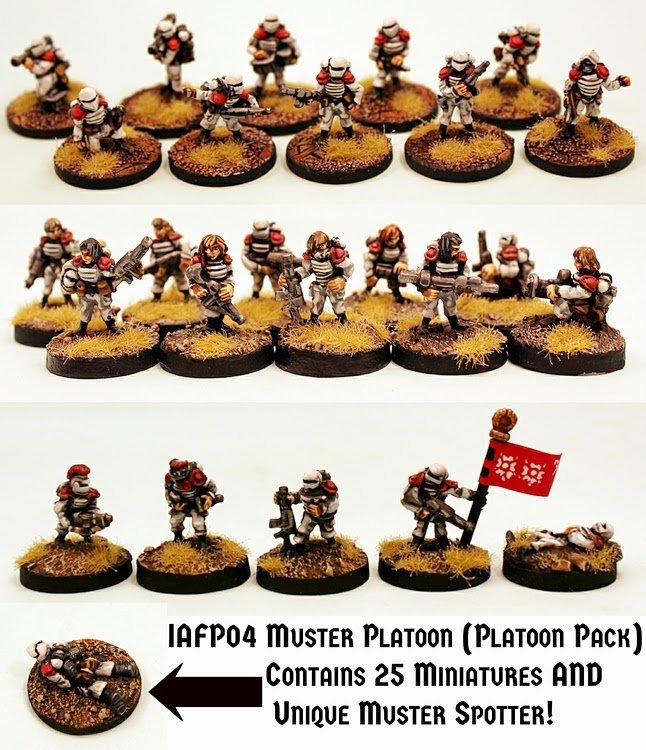 We are in the second week of our month long promotion period. Remember you get FREE SHIPPING on all orders plus a Goody Bag in every order as well as Reward Points on your account with us and the monthly free miniature too. Go HERE for details. We have a new release today following up on the excellent IAFP07 Planetary Militia Platoon we present a platoon with a unique additional miniature in it for The Muster.

IAFP04 Muster Platoon
This pack gives you a full platoon of Muster soldiers as well as a unique miniature only found in this code. If you want to field a full force suitable for skirmishing then this is the code for you. Twenty five different miniatures which are IAF003 Muster 1st Squad, IAF059 Muster 2nd Squad (Female) and IAF060 Muster 1st Platoon Command. On top of this you get the unique miniature which is a prone Muster Spotter, visor raised, which is found only in this pack and what's more its free within the pack. Excellent! As always this code can be bought as a pack or select the three packs and save 10% option on the page. Go HERE. Price 12.50GBP per pack.

IAF060 Muster 1st Platoon Command
There are now command poses for our 15mm Muster squads! This code contains five miniatures in Aketon clam shell armour in command poses. These are a Majoris (Platoon leading officer), a Muster Medic, a Muster Comms, a Muster Standard Bearer and a poor Muster casualty. Great for your Muster Platoons. Excellent on their own or for mixing into other Muster forces. As always this code can be bought as a pack or as single miniatures or select the three packs and save 10% option on the page. Go HERE. Price 2.50GBP per pack.

IAF059 Muster 2nd Squad
An entirely female squad of ten brand new poses of white metal 15mm scale miniatures. Female Muster for your Platoons! IAF059 contains ten miniatures in Aketon clam shell armour armed with a variety of weapons including Moth Type 6 Rifles, Tumbler Mpi, Hermit 44mm Plasma Rifle, Minstrel PP2 Taser (a rarer support weapon) and the first ever trooper with the Ron 32mm Hi-Ex Launcher. All but two poses are bare headed so that you can see their faces. There is also a pose with the breather part of the helmet typically worn within the helmet on her face for added character. Excellent on their own or for mixing into other Muster or Retained forces. As always this code can be bought as a pack or as single miniatures or select the three packs and save 10% option on the page. Go HERE. Price 5.00GBP per pack.

IAF003 Muster 1st Squad
The original ten man squad of 15mm white metal Muster miniatures. IAF003 contains ten different miniatures in Aketon clam shell armour armed with a variety of weapons including Moth Type Rifles, Anvil 888 Launchers and Hobbs Bomb. This is a core pack which can form the basis and the bulk of your Muster forces at the Platoon level. Excellent on their own or for mixing into other Muster or Retained forces. As always this code can be bought as a pack or as single miniatures or select the three packs and save 10% option on the page. Go HERE. Price 5.00GBP per pack.

Information Burst
Our spring convention month offers of free shipping and a goody bag are now on and last until 1st May. The IMP20 Female Legion Officer of the Khanate Empire is April 2015's free 15mm scale miniature for the month which is automatically put into every order at the rate of one per order regardless of order value. It can also be bought in any amount on the monthly IMP page of the website for this month only too before being withdrawn. It will be one of the twelve in the 'Year Two Collection' on our second anniversary. After the Prydian Army the alien soldiers of the Shia Khan are the biggest part of our ranges and this character miniature is a first; a female officer in the legions. Legionaries are the prime foot soldiers of the Empire and this officer is bare headed while wearing a long cloak and carrying a Cupid Laser Pistol. She can be a lower or senior officer in any of your Legion forces. She stands 17mm tall and is a one piece white metal miniature. Finally remember that by placing an order with us you will sign up for an account with the website and that means you get Reward Points in all purchases and the free monthly miniature too. These points can be used any time to get free products and discounts on orders.