The nervous voice of the young Muster Private had repeated the question for the best part of an hour. Wearily his Sarj scanned the horizon once again and prepared to reply no to the private, but he hesitated. Upon the rise above the small cluster of Seorc Habitation Domes dark shapes had appeared. It was an atrocious night. Wet and with high winds too. Luckily the Sarj's platoon were out of the weather; holed up in the domes. While most of the domes were the typical five person sleep and live models three were not. The settlement had a comms spire for reporting to the district command and it had the small 'bubbler' type Hurwent Generator that put a hazy field over all of the domes and it had one sentry dome with a Moth 88 Rotary Cannon in a turret mount. It was this turret's visual system that the Sarj was using to scan the horizon.

“Yeah. I see them. Looks like at least two platoons of Yordists.'

The small figures up on the rise had arrayed themselves with their weapons pointing toward the fizzing and hazy field extended over the cluster of domes. The Hurwent Field generated by the dome was nothing like that of even a small town. Those fields could halt any form of attack and could withstand so much that ground assault was often the only option. This Hurwent Field was much weaker and while it could and would stop incoming fire and play havoc with powered armour that got near it eventually it would burn out its micro fusion generator and collapse. The Sarj knew it and the Yordists knew it. Anvil 888 rounds boomed out from the rise and exploded against and then within the Hurwent Field. For four minutes the rounds impacted and exploded and the Muster within the domes readied themselves as best they could.

“Get the ammo cans for the cannon ready. Gonna be any time now.”

His voice was steadier than he felt on the platoon channel but the Sarj needed his raw Prydian Platoon to be calm now. The Hurwent Shield was going to blaze out any moment and then only the Moth cannon would be able to slow the Yordists. Without the rain the shield would have lasted longer but those were the breaks. Back up was an hour out so it was the cannon and then the rifle once again. Hopefully the rebels would be put off closing in by five long barrels of fun.

In a sudden shock of white light the Hurwent Shield blazed out and by the time the first rain drops were hitting the rubbacrete of the domes the Moth 88 Rotary Cannon was firing long bursts of explosive shells at the rise and the Yordists were dying. The weight of their Anvil fire had dropped the shield and now the killing began.

“Are we ok Sarj? The Moth 'ill stop the Yordies won't it?”

In the green glow of the turret's visual system the Sarj trained the cannon across the rise and watched the Yordists die. An Anvil round struck the outside of the dome but failed to crack it. The Sarj gritted his teeth and continued to shoot.

“Be ready with that ammo kid. Can't fab any more now. Just be ready.” 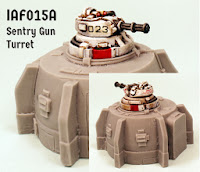 IAF015A Sentry Gun Turret
Put a Rotary Cannon turret on your Hab Dome and strike out at your enemies on the battlefield. Fitting to the universal circle on the top of the IAF015 Hab Dome this top mount can also be used as a separate scenic item too. As always you can purchase one or select the three packs and save 10% option on the page. Price 2.50GBP.


Call in the troops or signal to space with the comms spire for your dome. Fitting to the universal circle on the top of the IAF015 Hab Dome this top mount can also be used as a separate scenic item too. As always you can purchase one or select the three packs and save 10% option on the page. Price 2.50GBP. 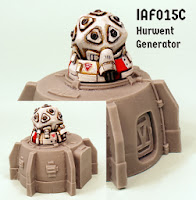 
Just like the cities of the Prydian Precinct you can fit your dome with a protective shield generator. Fitting to the universal circle on the top of the IAF015 Hab Dome this top mount can also be used as a separate scenic item too. As always you can purchase one or select the three packs and save 10% option on the page. Price 2.50GBP. 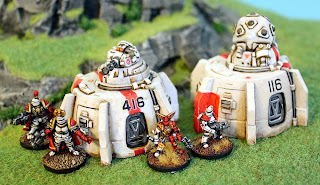 IAF015 Hab Dome
Our first 15mm resin building and it gives form to the structures of The Ion Age. Fabricated by the Seorc Guild Hab Domes have many uses and can be found all across Prydian space. The Hab Dome is the starting point for a whole series of resin structure system for The Ion Age in 15mm scale. The Hab Dome is the basic unit for future stackable and adaptable units. It can be used on its own or with other IAF15 series releases. It is a high quality grey tone resin one piece casting which is 65mm wide and 30mm tall with a high degree of external detailing. Suitable for use in any science fiction setting as well as The Ion Age. As always this code can be bought as a pack or as a single or select the three packs and save 10% option on the page. Price 7.00GBP.


It's the last week of October 2013 and you have only TODAY to get your IMP02 Retained Knight Bionic Fist free in any order before its retired permanently. What a month its been for The Ion Age. We hope that you enjoyed both the release of the Hab Dome and also these brand new top mounts for it. We meant what we said, the Hab Dome is the bottom of the mountain for our scenics range. There will be much more for it and beyond. Personally I am going to use my own IAF15C Hurwent Generator mount on its own as a part of my playtesting of Patrol Angis. Here's to the end of a big month for The Ion Age! Remember when you place an order with us you will be promoted to join the loyalty scheme which will earn you Reward Points on all purchases which can, once accumulated, be redeemed for discounts and special miniatures.

May 2019 and The Ion Age has been taken back into Alternative Armies.  It continues with new releases into the future!  Go to Alternative Armies for Ion Age pages of the 15mm Range the 15mm Terrain Range the 28mm Range the Publications range and the Free Downloads collection too for the latest.  All links to the ion age site are now defunct sorry!  If you wish to see something or ask a question email me on sales@alternative-armies.com.  GBS
Posted by Gavin Syme (GBS) at 09:20