It is about to be that time of year again that sees The Ion Age celebrate another year, this time its third year, of being space opera awesome for wargamers.  My baby is now a toddler with its own game system and near one hundred and fifty codes of 15mm scale miniatures, vehicles and terrain.  We will continue to grow of course but each August an event occurs which many look forward to namely the release of the full year of IMP Monthly Miniatures from last summer to this summer.  From September 2015 to August 2016 the miniatures were given away free in every order and shortly you will be able to purchase them as singles or a set in the YOC3 Year Three Collection come the start of next week.  It will be on this page HERE along with the Year One and the Year Two collections.  Below is an image of the collection and read on to hear what else will be happening next month as part of the fun! 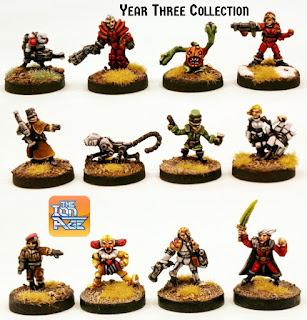 In August we will be releasing two new packs of miniatures sculpted by Dave Foley into the Ion Age Universe of 15mm characters which you can see HERE on the website.  These will be a pack of five different Security Droids and a rocking pack of five different Entertainers which will be great for any setting from space port to cantina and city streets of the future too.  Early next month for these. 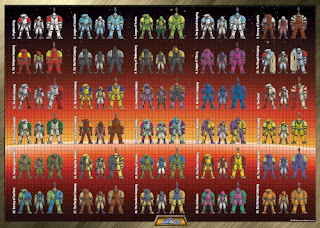 In August we will be adding to our Poster Prints range with a fantastic resource for fans of The Ion Age created for us with cooperation by Aris Kolehmainen over in the mighty USA...a poster of thirty uniform schemes for Muster, Retained and Desteria along with their titles from the Prydian Army to the Marcher Barons and the Condots along with many more.  Essential and already on my own wall!  You can see our poster prints HERE.

As it is our 'birthday' we will be having a great month long offer and it will be all about the IAF028 Khamel Tracked Bike where there will be 25% off the pack of three miniatures (Bike with Rider, Bike alone and Rider on foot) and 25% off the Bike with Rider on its own for those wanting to build a big force! You will also get a third new weapon mount option too! You can see this pack HERE and the offer will begin 1st August 2016.

August is going to be awesome!