Early on in the initial expansion of Humanity back to the stars within the Prydian Precinct it was noted that although large cities could be built given time in the short term a need was logged for structures which could cope with variable terrain and planetary conditions. Designing such structures was beyond the abilities of all but the core systems who turned to the pioneers who created the ubiquitous Rubbacrete and Golglass. These pioneers created materials which revolutionised construction and brought about massive improvement in lives all across the Precinct; The Seorc Compono Guild. Seorc Compono Guild (SCG) brought their finest minds to focus on the challenge and created one of the miracles of the century the Habitation Dome Riser System (HDRS). The HDRS would be standardised and shipped aboard vessels heading off world anywhere in the Precinct where they could quickly accommodate a sizeable population. Camarthan Prime was one such place among hundreds from airless vacuum to populous planet.

When the rumbling of the Civil War began to turn into an approaching thunder the Seorc Compono Guild (SCG) was approached on the idea of adding a standard pattern structure to the HDRS designed from the off to be made for defence. While Hab Domes are strong structures and can endure damage that would fell a lesser civilian building they are not made for war. SCG agreed and put in motion plans for the Block House which would be made in the same fashion as its other structures but would be stronger than anything patterned before. Many thousands of the Block House were shipped out across the Precinct.

Capable of withstanding multiple plasma or projectile impacts that would destroy a Havelock Battlesuit the Block House can be an anchor point of a settlement or a chain of them can form a line of defence in case of attack. Reports from battlefields across the Precinct spoke of people surviving terrible events due to the super thick curved Rubbacrete walls. The Prydian Army and the Marcher Barons alike have taken to placing block houses in locations that need to be held with a great deal of success. Weaker but much less expensive than the mighty Corbal Deployable Hardpoint but far stronger than a portable weapon with its crew with the added advantage of a permanent place for up to eight people to carry out their roles. There are also specialised Block Houses mounting landing pads for the air patrol of Skylark flyers and compounds for the holding of Adder type Combat Cars. The HRDS has gained a powerful new aspect to its success.
Quincy Portent, SGC New Glastonbury, 4330IC

Truly beautiful and crafted by hand by Sam Croes over several weeks the Block House is a work of miniature art in the space opera style. Curved and with a real feeling of being literally built like a cliff against a raging sea its going to be a tough nut for any attacker to crack open for the juicy innards.
IAF040 Block House
The Block House is a thickly walled structure made to take a real pounding in far future combat protecting colonists and troops alike. It is a high quality grey tone resin one piece casting which is 70mm long, 65mm wide and 35mm tall at its furthest points. It has a lot of external detailing on all sides and roof including the universal mount used on the Hab Dome and four firing slots on the front. It also has a rear airlock door and two side blank mounting points. Suitable for use in any science fiction setting. You will be able to make a whole settlement including strong points to keep your settlement safe. You can add any of the IAF015 Top Mounts or the IAF015 Tower Module to the top of the Block House and the locks and points line up for side mounting Hab Domes or other Block Houses. Decorate your wargame table. As always this code can be bought as a pack or as a single or select the three packs and save 10% option on the page. Go HERE. Price 9.00GBP.

In October 2013 we began the 15mm scale Ion Age terrain system with the release of IAF015 Hab Dome. Since then we have been more than happy with the excellent response world wide to our unique little dome. We expanded with three different IAF015 top mounts at the end of October last year, a sentry gun, comms spire and shield generator all made for the ring mount atop the Hab Dome. Next came the IAF024Fabricator Spire, a small but really special looking piece of terrain that looks great next to anything else we do. In January of this year the IAF015 Tower Module was released meaning that Ion Age fans could build towers of one, two, three or even four levels on top of their Hab Domes and top them off with any of the mounts. March 2014 saw the release of the IAF015 Landing Platform which could be placed on the wargaming table or mounted on a Hab Dome or atop a tower of Tower Modules (great for landing the IAF029 Skylark Patrol Flyer) and two more Top Mounts a missile pod and flak cannon. This brings us to the present and the release of the IAF040 Block House the first of our summer season 2014 terrain releases with more to come. Enjoy! 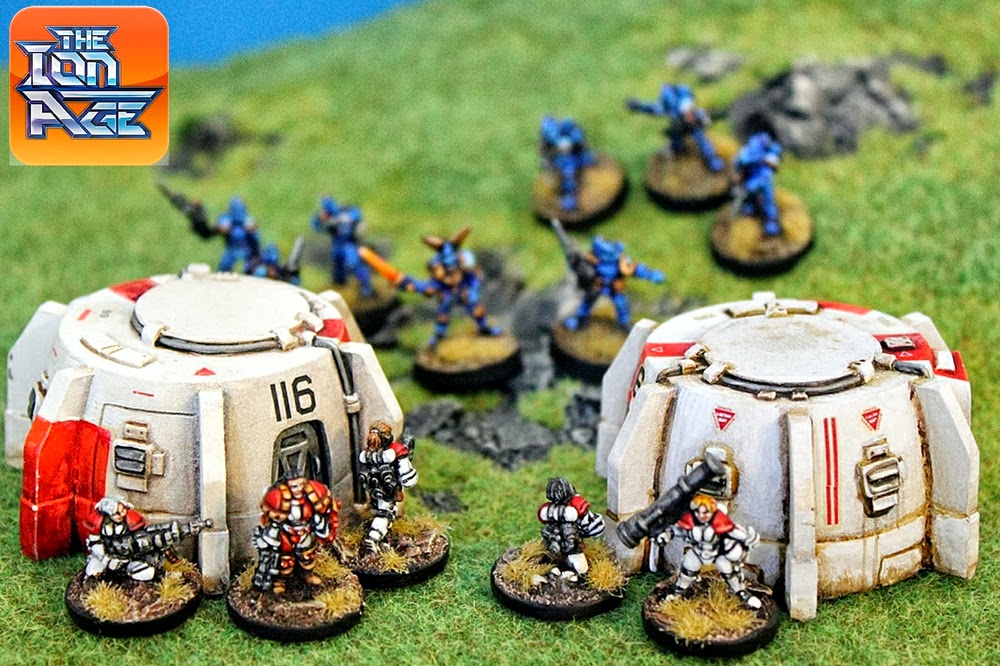 IAF015 Hab Dome
The first 15mm resin building from the The Ion Age. Fabricated by the Seorc Guild Hab Domes have many uses and can be found all across Prydian space. The Hab Dome is the starting point for a whole series of resin structure system for The Ion Age in 15mm scale. The Hab Dome is the basic unit for stackable and adaptable units. It can be used on its own or with our other terrain releases. It is a high quality grey tone resin one piece casting which is 65mm wide and 30mm tall with a high degree of external detailing. Suitable for use in any science fiction setting as well as The Ion Age. Decorate your wargame table. As always this code can be bought as a pack or as a single or select the three packs and save 10% option on the page. Go HERE. Price 7.00GBP.

Information Burst!
There is only a few days left to get IMP09 Retained Sniper sculpted by Eli Arndt free in every order from us. You can see this currently free miniature HERE until 1st June 2014.  It will appear again later this year for normal purchase. I would like to thank everyone who placed orders for the new IAF045 Legate Vanya character pack for the Khanate Empire and also took advantage of the special offer on legions packs that is now ended. There will be a couple of sneak peek blog posts in the coming days concerning an upcoming Early Support Offer (yes they are back!) and a new troop type for the Shia Khan Empire. Super! Lastly remember that by placing an order with us you will sign up for an account with the website and that means you get Reward Points in all purchases (plus a free miniature). These points can be used any time to get free products and discounts on orders.