Welcome to the new year!  January is going to be a packed month as The Ion Age motors on after a full week off over the festive period (who needs sleep when there is space opera awesome to create) with a total of five new releases including an Early Supporter Offer.  January is all about the Shia Khan Empire with these codes coming out and today a wee preview look at our first fan requested created code. 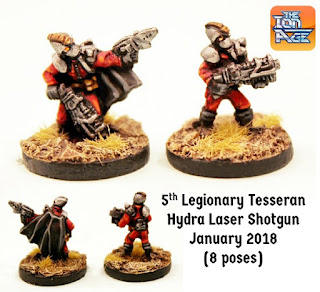 “Hydra 6.8kw Laser Shotgun. Alongside the Juno Laser Rifle, the Maia Mpi and the Flora Grenade Gun, the Hydra Laser Shotgun makes up the last of the four primary infantry weapons of the encountered Legions on Camarthen Prime. The Hydra is a weighty weapon at twice the mass of the Maia Mpi and it has a large under grip as it requires two hands to use correctly. The power cell is located in this long grip and provides the energy for a hundred pulls of the trigger. A pulse beam of 6.8 kilowatts is somehow split into seven micro beams which saturate a close area. This area is a kill zone in which any foe who is not in powered armour has little chance of survival.”

Back in the summer of last year IonFans requested in the most numbers (we listen to customer requests and if you would like to make a suggest send it to info@theionage.com we always reply) the creation of a fifth pack of core troops for the Shia Khan Empire.  A weapon not held by any 15mm scale Legionaries up to this point the Hydra Laser Shotgun which could be used as close assault troops or, as many players of Patrol Angis do, mixed into Ordos (platoons) alongside the other thirty three poses of Legionary.  We show you this new pack here and it will be released on the 12th of January alongside our Early Supporter Offer for the smallest of Khanate Vehicles (as found on page 42 of The Khanate Return) the attack orbs!  More on those at the time (they are bloody awesome) but this new Tesseran plus the Orbs will make you smile and get you some pain down on those Prydians! 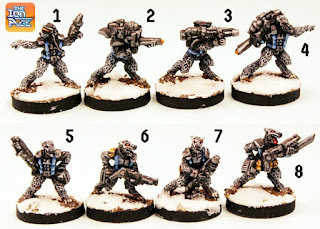 Third Tesseran of our 15mm scale space wolves begins the releases on the 5th of January at popular request to go alongside the two other packs which are already on the website.  The 3rd Tesseran is a support code to back up your command and typical infantry.  We are working on completing the Ordos (Platoon) Pack with its unique miniature and we aim to have that out this spring.  See the other Beotans HERE.   Full news at the time.

2018 is going to be a cracking year and the focus will shift away from aliens back to Humans in the spring.  Get ready for the Early Supporter and grab life by the Orbs when the 12th arrives!