The Ion Age is delighted to make our only new release for November with the final code featured in Patrol Angis which needed new miniatures in play. The IAF126 Burgeon Grav Bike gives your Retained Knights the fast mobility they want on the battlefields of the Prydian Precinct.  We have the pack which contains a bike with rider, bike on its own and rider on foot and you can also choose the normal three packs with a saving plus single poses from the pack too.  On top of this we have two bundles now on the website one for this new anti-gravity bike and the other on the IAF128 Afara Strider mecha kits.  Go HERE or read on for more.

VENTUS MODEL 201 STEED
Among the ranks of the Retained Knights you will find the Burgeon. These knights are as adamant about the Code Gallant as any other but they take upon themselves an additional vow of loyalty that is beyond the duty of any others. For the Burgeon are the masters of the steeds. They are the riders of an animal which has no heart or legs but rather instead has an engine and thrusters which beat with as much if not more power than any creature's could. The Burgeon ride into battle upon the semi-sentient Ventus Model 201 Steed which is a unique type of repulsar bike.

The Ventus is the creation of the foundation days of New Glastonbury and the relic seeking adventures into the now legendary Tor which orbits that golden hue planet. Those first seekers of what would become the seat of the Council of the Addan found many treasures and clues which set them on a path towards bringing peace and stability to a bleeding precinct. Among those treasures were bronze coloured boxes none of which were as large as a human head and which seemed inert and indeed solid. However a chance event led to a fantastic discovery. These boxes were alive! Not life in the way of biology but rather a life of bare sentience like an infant awaiting lessons in all things needed for adulthood. Named Ventus after their love of movement the boxes took to a possessor in a way never seen before. Once a person had held a box for more than a few hours and had spoken to it the Ventus became bonded to them and would accept the voice of no other. It emerged that the Ventus was only semi-sentient as it could learn only that which it was taught by its owner and never had ideas or notions of its own.

A robotic companion and that was the way it would have stayed except for another discovery which was that if you linked a Ventus into a machine it could control that machine no matter what its size or complexity or purpose. As a result Ventus were given to ship masters and to Knight Errants as well as to Nobles who were willing to pay a great deal of coin for them. There is a cavern somewhere within the New Glastonbury Tor in which new Ventus are created by the command of the robed guardians of the ancient rock. It is a mark of great honour and within the Code to be called to the Chamber of the Ventus to receive a blank minded box and for your voice to be the first it hears. As with a great deal of the Tor it is beyond the knowledge of the Prydian Precinct the manner in which Ventus are created as they seem to literally materialise out of thin air.

From those beginnings the bronze boxes have spread just as the Code has spread. Ventus operated starships equipped with Ancep Drive at the word of their master and were integrated into Alwite powered armour as system securing companions. The greatest success though came with the development of the Steed. A body for the Ventus to sit amid and operate for a Retained Knight of the Burgeon who rode upon it. As a result each Ventus Model 201 Steed became the greatest friend to its knightly master and meant a speed and responsiveness beyond what any mortal man could hope to match as well as a loyalty no mere machine could emulate. The death of a Burgeon leaves a Ventus with no master and means that it must be removed and destroyed for its own sake while the destruction of a Ventus can leave a knight grief stricken as with the loss of a dear family member.
Academy Auto-Trainer Series 02, New Glastonbury, 4308 IC

IAF126 Burgeon Grav Bike Pack
We are super happy to release the next bike code for the Ion Age 15mm Range.  Following on from the IAF028 Khamel Tracked Bike we have the Retained riders of the semi-sentient steed the Ventus. A sleek and speedy vehicle.  This code contains three white metal miniatures which are the Bike with Retained Rider, Bike with no rider and Retained bike rider on foot.  This means you can field your anti-gravity bikes with great flexibility and three different modes.  The bike comes with a separate Valerin 9Mw Laser which can be left off or mounted on the front of the bike.  As always this code can be bought as a pack or as single miniatures or select the three packs and save 10% option on the page. Go HERE.  Price 5.00GBP per pack. 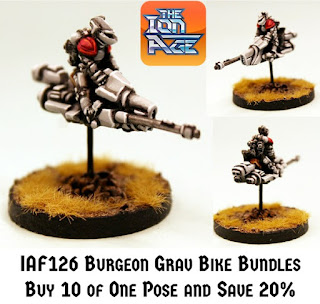 Burgeon Anti-Gravity Bike Bundles
We know that many IonFans have been awaiting the arrival of the new bike and so we have created a great bundle offer.  There are three bundles one upon each of the following.  Ten Bikes with Rider, Ten Bikes with no Rider and Ten Riders on Foot.  Each bundle gives you 20% off single purchase price and allows the creation of a large force with a mighty saving.  Go HERE and use the drop down menu to choose your bundle. 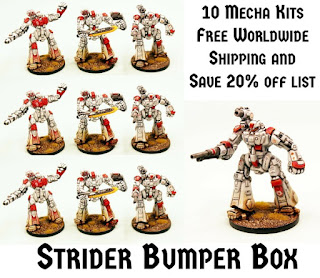 Afara Strider mecha Bundle
Earlier this year we released our first light mecha kit the IAF128 Afara Strider in three different variants.  Easy to assemble and to convert it has proven a firm favourite this season and while we offer it HERE with single and buy all three and save 10% we have placed on to the website by IonFan's request the Mega Bundle!  The mega bundle contains ten mecha kits which is three of each variant plus one more randomly included.  You get 20% off the single price and free worldwide shipping on this bundle.  Go HERE.

Information Burst!
This month's free miniature is a superb character robot the Grim Reaperbot.  Standing 16mm to the eye line it is a titanium skeleton with cloak and scythe. There is a growing page on the Ion Age website where the current and all former IMP series free miniatures are shown so that you can see what came before. Enjoy looking at what came before. Now online IMPS02 Spooky Set which has all four Halloween themed miniatures in one code.  We have now made our releases for the month. We will also have an article with a fright theme about a Prydian Precinct faction plus the last Friday of November will see us join up with Alternative Armies and 15mm.co.uk to make our four day Black Friday offer.  This is a super offer and we will tell all one week before it goes live.

Lastly we have a new monthly special...this time on our great Duxis Battlesuit favoured by Retained Knights.  25% off all variants of this modular battlesuit including five different ranged weapons and three melee versions. Enjoy!