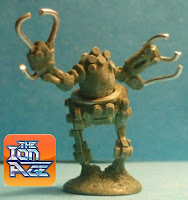 The Taranis main battle tank is the king of an Ion Age battlefield.  Its fire power and super dense armour make it a tough nut to crack however it is an expensive machine and when resources are tight no Knight Commander wants to lose a Taranis if he can avoid it.  Every Taranis carries four crew with one of them devoted to communications and drone control.  Drones are assigned to a Taranis tank typically in a small herd of five which are deployed ahead or to the enemy facing side of the tank.  The drones have different functions but all these functions are dedicated to enhancing the fighting ability of the Taranis and to protect it from enemy fire.

Bob Naismith designed the Taranis tank which is coming in October 2015 from The Ion Age and its a beauty (look out for a preview article soon on IAF100 Taranis Tracked Main Battle Tank and all its sub-variants) and while it was 3D printed with elements of traditional sculpting he also created the Taranis Running Drones. These are hand sculpted by this legendary designer and fit in excellently with the tank. 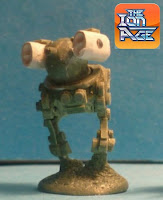 We have the greens on site and are molding them up right now in time for the coming release.  Above you can see two of the types, the Technical Drone and the Missile Drone.  Below you can see the concept pencil sketches drawn by Bob.  There are five different drone variants all mounted atop the runner legs.  The Technical Drone, the Missile Pod Drone, the Gun Drone, the Jammer Drone and the Interference Drone.  Some drones are offensive and attack the enemy while others are defensive to distract enemy attacks.  Ultimately a drone will place itself in harms way and sacrifice itself to protect its tank from damage. 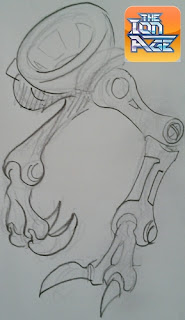 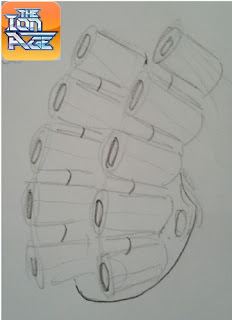 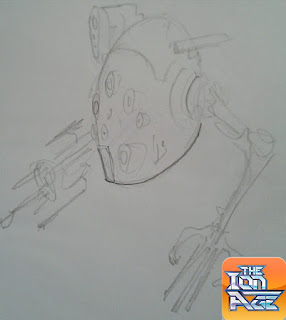 The drones will be released as a pack code with sub-choices as normal within the pack.  Rumour has it that the drones might actually be free in the upcoming Early Supporter Offer (ESO) for IAF100....

There will be a full preview of IAF100 Taranis Tracked Main Battle tank soon.